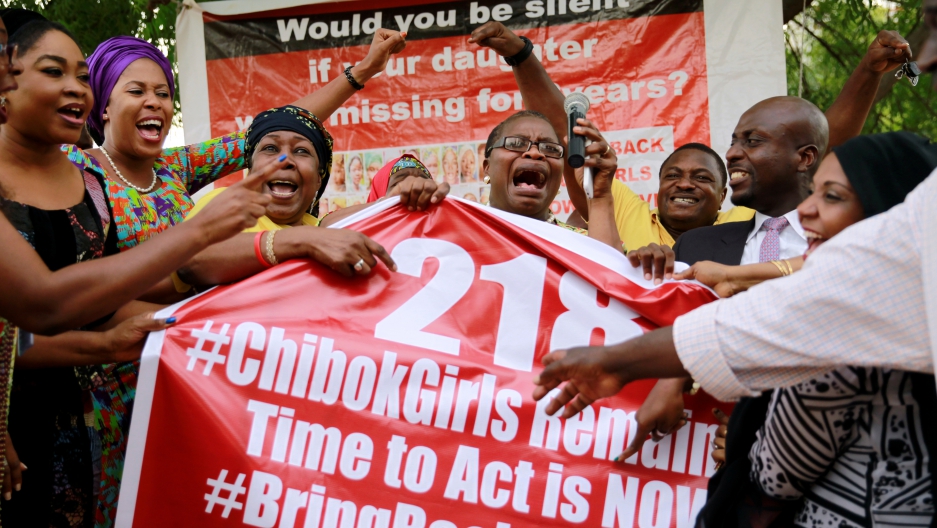 Two years after 276 Chibok schoolgirls were kidnapped by Boko Haram, members of the #BringBackOurGirls campaign react to the presentation of a banner during a sit-out in Abuja, Nigeria on May 18, 2016.
Credit:

When Human Rights Watch observers arrived at a school on the outskirts of Hammam al-Alil, a town outside Mosul in northern Iraq, they found trash mixed in with about 300 human bodies. The bodies were bound at the wrists and ankles and blindfolded.

Witnesses told observers they saw the victims brought to the site in trucks, and they heard the sound of automatic gunfire, followed by screams. Soon, wild animals found the corpses and the smell of decomposing bodies permeated the area.

“They made no real effort to properly bury the bodies,” said Belkis Wille, a senior Iraq researcher at Human Rights Watch, who visited the site in November. “Instead, they just dumped all sorts of trash on top of them.”

The people in the grave were 284 police officers who were kidnapped in October from villages south of Mosul under ISIS control and forced to march to Hammam al-Alil. According to Human Rights Watch, they were executed over a series of three days and left in a former military training space behind an agricultural school.

The kidnapping was one of six mass hostage events conducted by ISIS in 2016 in Mosul alone, according to new data released in July by the Global Terrorism Database (GTD). Kidnappings in Mosul represented about 1,100 of the more than 10,000 people abducted by ISIS last year in Iraq, Jordan and Syria. More than 2,300 of those captives would subsequently be killed.

EXPLORE THE NUMBERS: Was there terrorism where you live?

The victims of these attacks were diverse. They included women who refused to marry ISIS members, children who would be trained as suicide bombers, police officers, activists and civilians who were captured to be used as human shields before being executed.

“They knock on all the doors, they tell all the families to move with them, at gunpoint,” Wille said. “They target everybody. They move the entire neighborhood.”

Mass abductions like the ones perpetrated by ISIS in Iraq are rare. In 2016, there were 46 incidents where more than 50 victims were kidnapped or held hostage, a mere 0.03 percent of all terror attacks worldwide. But these events caused some of the highest fatalities. According to the latest figures from the GTD, seven out of the 10 deadliest terror attacks in 2016 involved kidnapping and hostage-taking, and in each one, more than 100 victims were abducted and killed.

A deadly and growing trend

Since 2014, there has been a steady increase in the number of people kidnapped and taken hostage by terrorist groups. Over the same period, the number of terrorist incidents has decreased, and so has the number of terrorist incidents that involved hostage-taking or kidnapping. In the GTD, hostage-taking is defined as holding a person against their will, and kidnapping is defined as taking a person held against their will to another location, but the two terms are used interchangeably and and grouped together in the data.

“[The increase] is mostly driven by these mass hostage-taking events,” said Erin Miller, GTD program manager at the University of Maryland.

The GTD has tracked terror attacks around the world since 1970, using media reports to find and record incidents. In the database, terror attacks are defined as acts of violence that are intentional and not perpetrated by state actors. In addition, the incidents must include two out of three of the following factors: an economic, social or religious goal; an intended audience that reaches beyond its victims; and a context beyond the scope of legitimate warfare.

“The Islamic State has been doing this for a couple years now and the numbers keep getting bigger,” Miller said. “One of them involved 3,000 hostages and the other 1,500 hostages. The numbers have just gotten ridiculous.”

Terror groups have many motivations for kidnapping victims. During a group’s formative period, money is a key incentive.

“At the beginning of most terrorist organizations, they need money,” said Mia Bloom, professor of communication at Georgia State University. “Later on, they might be able to find a government or other donors, but at the beginning, most rely on illegal activities to collect a certain amount of money that they need, like a startup.”

Bloom says at this stage of formation, activities like hostage-taking and bank robberies — crimes that are high-risk and high-reward — are common. Hostage-taking, especially of Western hostages, can yield “quite a bit of cash.”

Even though European governments often deny paying ransom, a New York Times investigation from 2014 found that al-Qaeda and its direct affiliates have gained at least $125 million in revenue from kidnappings since 2008. Data from the GTD before 2012 is inconsistent with the current dataset, so we were unable to verify the amount that was earned during the formation of al-Qaeda (1988), ISIS (1999), and Boko Haram (2002).

But Bloom says that ordinarily, a well-established group like ISIS stops depending on hostage-taking for financial gain.

“All terrorist groups need to diversify their portfolios,” Bloom said. “They can’t have all their eggs in one basket — that makes you very vulnerable.”

In addition, too much emphasis on hostage-taking and ransom could dilute the ideological message of a group, and turn the focus to money instead.

For example, Abu Sayyaf, a terrorist group in the Philippines, was formed in the 1990s with support and funding from al-Qaeda, but has become more well-known for its criminal activities than jihadist beliefs. Although some members have pledged loyalty, ISIS does not officially recognize Abu Sayyaf.

“They began kidnapping and they never stopped,” Bloom said. “They were getting so much money that it really changes the underlying ethos of the group.”

Last year, the group orchestrated 27 kidnapping and hostage-takings, and collected more than $16 million in ransom, according to the GTD.

Mass abduction of women and girls — like the high-profile kidnapping of 276 school girls from Chibok in April of 2014 by Boko Haram — are driven by other motivations.

“It becomes a source of what I call the three R’s: recruit, retain, and reward,” Bloom said. “It allows you to recruit fighters, because if you’ve got these women you can hand them out, you can reward them with additional women, and you can retain them and keep them from leaving and going back to your families.”

Defying abductors is not an option: In the sixth deadliest terror attack of 2016, 250 women were executed in Mosul for refusing to marry ISIS members.

Women who are not of childbearing age — either too young or too old to become wives — can be used to be trained as suicide bombers. This includes children, an increasing tactic by Boko Haram, according to a report from UNICEF in April 2017. UNICEF estimates that 117 children have been used in suicide attacks since January 2014 in Nigeria, Niger, Chad, and Cameroon. The overwhelming majority — 80 percent — of these children are female.

‘It looks very different from case to case’

Kidnapping can also be a powerful political tool — both in bargaining against existing governments and gaining more control as an independent state. The execution of the 284 police officers at Hammam al-Alil served both as a precaution and a warning to other citizens. Wille says that ISIS feared the police might still be allied with the Iraqi state — and lead an insurrection against its control. The Chibok schoolgirls were used by Boko Haram to bargain with the Nigerian government — reputedly, in exchange for freeing several Boko Haram commanders.

There is no one universal reason that a terrorist group might take hostages, or who those victims might be. These strategies also change over the course of a terror group’s formation — and is dependent on its current state.

“Over periods of time, there are periods of expansion and contraction in a terrorist group,” Bloom said. “There are periods in which it is a good time to recruit.” When potential recruits run low, a rise in kidnappings may results —  to keep up with the supply of soldiers, bombers, and slaves.

Still, even a well-established group may see a rise in mass kidnappings if circumstances change.

“If they lose territorial control, like what’s happening with ISIS now, they may revert back.”