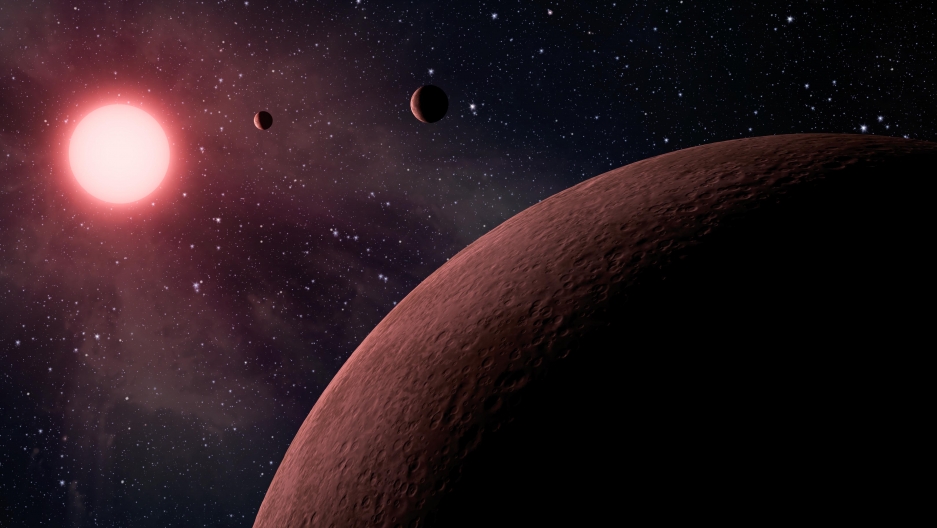 This is an artist’s concept of a planetary system discovered by Kepler, called KOI-961.

Scientists behind NASA's Kepler K2 mission recently unveiled hundreds of new planet candidates for NASA’s exoplanet catalog, including 10 that could be rocky planets in the "just right" Goldilocks zone of their stars.

“We’re up to just over about 4,000 planet candidates once you add this catalog in,” says Susan Thompson, Kepler research scientist at the SETI Institute and lead author of the new research. So far, more than 2,300 have been confirmed as actual exoplanets.

The 4,000-odd candidates are from a part of the sky near Cygnus, the swan constellation, where Kepler gathered data several years ago as part of its original mission.

For this recent catalog release, scientists reprocessed all of Kepler’s observational data from its first four years — a final search on the mission’s part, Thompson says.

“But people will continue to use these results and the data and keep finding new gems in it,” she adds. “I don’t think Kepler is done at all in that way.”

Thompson explains that the Kepler Space Telescope works like a big bucket for starlight.

“We’re just measuring how bright the stars are,” she says. “And what we’re looking for is the planet passing in front of the star, and that causes the star to just suddenly look a little bit dimmer for just an hour or two or maybe up to 12 hours.”

Once scientists have observed a star’s light dim several times in this way, they can call it a planet candidate, Thompson says. But there are many more planets out there than we’ve observed using this method, she adds — more planets than there are stars, even.

The Kepler telescope offers only early signs of a planet’s potential habitability — like its size or distance from its star. But even that information can give scientists clues about which exoplanets deserve a closer look.

“We’re picking the ones that are most similar to the Earth because the Earth is the only place we know has life right now,” Thompson says.

“So, we pick those that show that they’re about the same size as the Earth, so we believe there might be a surface that you could actually stand on. And we hope that these planets, therefore, can hold an atmosphere, as well, but we don’t know that.

“And then we are also picking those that are the right distance away from the star. So, it’s at just the right temperature.”

Now, the Kepler telescope is on another mission in space as K2, gathering data along the Earth’s ecliptic. “That’s the part of the sky that has your zodiac symbols in it,” Thompson says. The telescope is still looking for exoplanets, but that’s not all. “It’s also doing a whole bunch of other types of astrophysics, from supernova down to asteroids,” she says.

Meanwhile, the James Webb Space Telescope is set to launch in 2018. The powerful infrared scope will help us further explore exoplanet habitability.

“In terms of exoplanets, what people are hoping to use it for is to start to actually measure the atmospheres of some of these exoplanets,” Thompson says.

“So, it’s not trying to find the exoplanets but study them further. Can we figure out, is there oxygen, for instance, on the surface of one of these planets?”