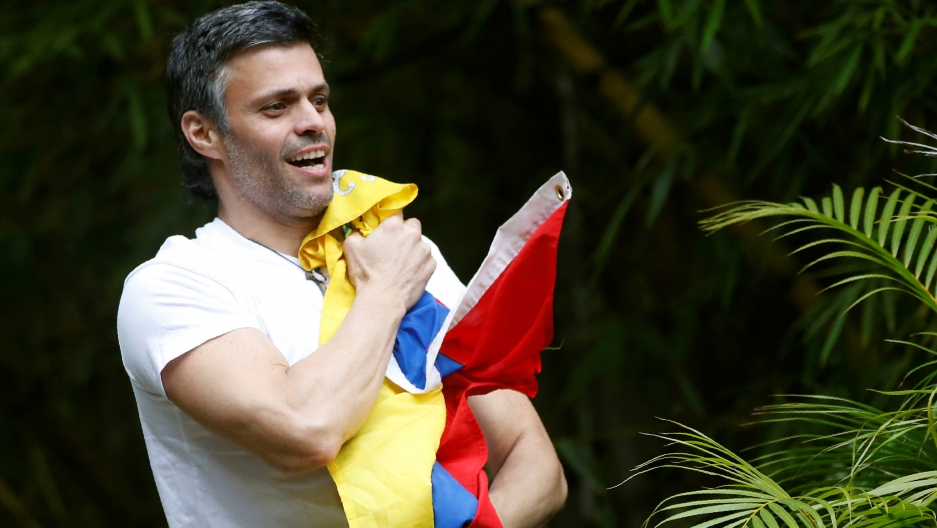 Venezuela's opposition leader Leopoldo López, who has been granted house arrest after more than three years in jail, salutes supporters, in Caracas, Venezuela, on July 8.

Venezuela's most prominent political prisoner, Leopoldo López, vowed Saturday to continue his fight for freedom after being released from jail and placed under house arrest.

The surprise move came amid intensifying pressure on the embattled leftist government of Nicolás Maduro, with a rising toll of death and destruction from three months of nonstop street protests.

López, leader of the Voluntad Popular (Popular Will) party and a symbol of resistance to the Maduro government, emerged hours after his release from prison looking fit and happy.

He pumped his fist in the air, unfurled the Venezuelan flag and told a crowd of supporters who had gathered outside: "Yes, we can!"

"I maintain my firm opposition to this regime," López said in a statement read by a leader of his party. "I reiterate my commitment to fight until conquering Venezuela's freedom."

President Maduro, in televised remarks later Saturday, called for a message of "peace and rectification" from López.

Maduro said he hoped the statement from López could provide the basis for reconciliation "because the nation wants peace."

López, a 46-year-old Harvard-trained politician, was held for more than three and a half years in a military prison outside Caracas for allegedly "inciting violence" by calling for anti-government protests.

His release has been a key demand of Venezuela's opposition and the international community, amid an intensifying political confrontation aimed at forcing the unpopular Maduro to hold early elections.

At least 91 people have died since April 1 in clashes between protesters and security forces over moves by the courts and the government to strip the National Assembly of power, delay elections and rewrite the constitution.

The Supreme Court said it had ordered López's move to house arrest for health reasons, calling it a "humanitarian measure,"

In Madrid, Javier Cremades, López's Spanish lawyer, underscored that "all of Leopoldo López's civil and political rights must still be restored."

"What's more, there are still 300 political prisoners in the Bolivarian jails," he added.

Foro Penal, an NGO, puts the number of political prisoners in Venezuela at 433. The government insists they are in jail for acts of violence.

The US State Department called the release of López "a significant step in the right direction" — but said many more such steps are needed.

On Friday night, López's wife Lilian Tintori spent an hour visiting her husband in his cell at Ramo Verde prison just outside Caracas.

The former mayor of a Caracas municipality, López was an early champion of street protests to force political change in Venezuela as the oil-rich country spiraled into a severe economic and political crisis after the death of Maduro's predecessor, Hugo Chavez.

The government blamed López for a months-long outbreak of anti-government protests in 2014 that left 43 people dead in clashes with security forces. 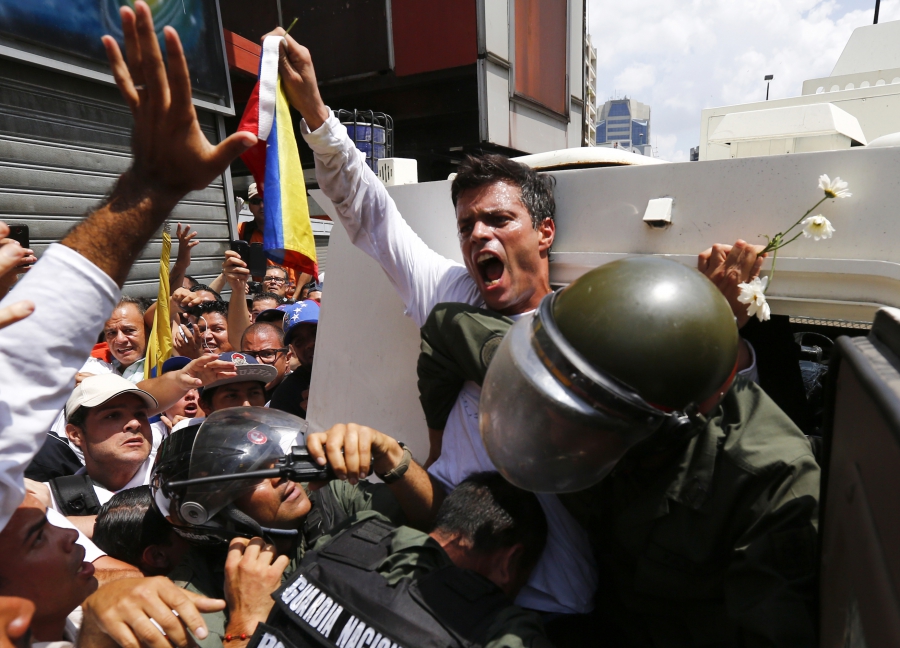 The dramatic moment, on Feb. 18, 2014, when Venezuelan opposition leader Leopoldo Lopez surrendered to National Guard in Caracas. Opposition supporters have rallied for his freedom ever since.

He was sentenced to nearly 14 years in prison on charges that his defense said were politically motivated and based on "manipulated" evidence.

Since then the crisis has deepened, with more deaths and increasing levels of violence.

On Wednesday, pro-government militants wielding sticks and pipes stormed the grounds of the opposition-held National Assembly and beat lawmakers, injuring at least five at the only state institution that the opposition nominally controls.

Maduro condemned the violence and said he had ordered an investigation.

Cremades said the latest development "indicates how desperate and divided they are, it's a demonstration of the weakness of a cornered regime."

Two other prominent opposition leaders jailed by the government on similar charges have since been moved to house arrest — Caracas mayor Antonio Ledezma and the former mayor of the western city of San Cristobal Daniel Ceballos.

Late last year the government released some lesser-known detained activists at the behest of the Vatican.

On that occasion, López called on Venezuelans to continue protesting in the streets. His wife denied that the meeting was to negotiate his house arrest in return for a defusing of the protests.

"Leopoldo will never negotiate his liberty, first because it is the liberty of the entire country," she said at the time. "It's not the liberty of one man, but of all of Venezuela."

Late last month, she posted a video on social media in which a man she said was her husband could be heard shouting from his cell window at Ramo Verde prison that he was being tortured.

The government denied it, releasing supposedly current photographs showing him calmly receiving food from his family.