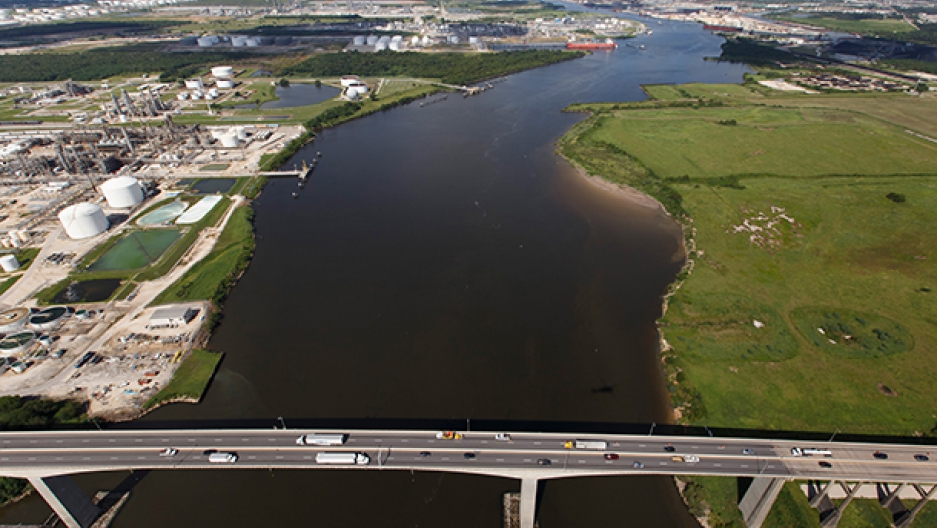 Refinery complexes along the Houston Ship Channel in September 2016.

Houston, America’s fourth-largest city, with a metro population of more than 6 million, is at risk of major devastation and massive loss of life from storm surges if a big hurricane were to hit, according to an investigation by reporters from The Texas Tribune and ProPublica.

Ironically, the city owes its existence to a 1900 hurricane that devastated Galveston, Texas — the city that originally was supposed to become the major port on the Gulf of Mexico. After Galveston got pummeled by this hurricane, Houston, which is farther up Galveston Bay, became the regional economic hub.

But the geography of Galveston Bay still leaves Houston remarkably vulnerable to a catastrophic storm, according to Neena Satija, a reporter with The Texas Tribune and Reveal, a program from the Center for Investigative Journalism.

“Think of Galveston Bay as a kind of bowl,” she explains. “When a storm comes in from the Gulf of Mexico, that bowl starts to fill up. The water gets higher than the rim of this bowl. The rim, of course, is the beaches that are all around Galveston Bay. So, the bowl fills up, and the water spills onto the shore over the rims.”

“On top of that,” she continues, “inside this bowl is a 50-mile channel, which continues another 15 or 20 miles or so inland. As the water gets funneled into the channel, it becomes an even narrower space for the water to go through, so it spills out over the edge onto land even more quickly and with even more damage.”

It’s similar to the situation in New Orleans, where a channel called the Mississippi River Gulf Outlet (known as Mister Go) brought the storm surge from Hurricane Katrina right into town. Unlike New Orleans, Houston is dozens of feet above sea level, Satija notes, but if the right storm hits at the right angle, a similar effect will occur — and Houston doesn't have a sea wall or any levies.

Should such a storm surge hit, Houston’s industry and a large segment of the population will be right in the water’s path, Satija says. Houston is home to the nation’s largest refining and petrochemical complex, which is vital for manufacturing jobs and the nation’s oil supply and thousands of storage tanks line the channel.

According to government regulations, these tanks must withstand high wind speeds, but “there's really nothing in the regulations that talks about storm surge,” Satija says. The rushing water from a large storm surge could lift these tanks off of their foundations.

“These are huge tanks. Some of them are football fields wide. They could float around, they could hit things, they could fall back down — any one of those things — causing them to rupture and leak. That’s exactly what happened during Hurricane Katrina,” Satija adds.

Along Clear Lake, which is a suburb of Houston, the dense residential population is growing larger every year, Satija notes. “Those folks like to live on the beach. They like to live on the water. So, you see houses that are right up against the water, and some that really aren't all that elevated.”

In 2008, when Hurricane Ike was heading toward the Texas coast, experts projected the scenarios that Satija and her colleagues are now writing about: a 20- to 25-foot storm surge on the Houston ship channel and on Clear Lake, with thousands of people dead.

“Rick Perry, the governor at the time, actually spoke to my boss at The Texas Tribune and said he thought a million people would be dead,” Satija says. “And people didn't evacuate. … Especially on Clear Lake, people did not take the storm threat seriously, and they didn't evacuate. That’s why we think so many people would have died had the storm taken its predicted course.”

Fortunately, just a few hours before it made landfall, the storm turned, hitting a much less vulnerable area.

The reporters place the odds at about 1 in 10 that a serious storm will hit the Houston area in the next 30 to 50 years, but most Houston residents seem unaware of the risk, Satija says. People who have lived in Houston for decades are a lot more aware, but they tend to minimize the chances of a destructive storm striking.

“Imagine living in Houston for 30 years and getting this kind of warning every couple of years that there's going to be a big one, and it doesn't hit,” Satija explains. “That’s what makes this actually even more dangerous: When people don't take the threat seriously, that means that when it finally does happen, you have a really big problem.”

Since the reporters published their investigation, there has been more talk about the need to build a barrier of some kind to help contain a storm surge.

Former President Barack Obama signed a law in December 2016 that included some language that could help expedite the process of doing a study, Satija says, but, even then, it will probably take between five to 10 years to build an effective barrier.

“Not much else has been done, that we're aware of, to protect the city and the region in the meantime,” she notes.