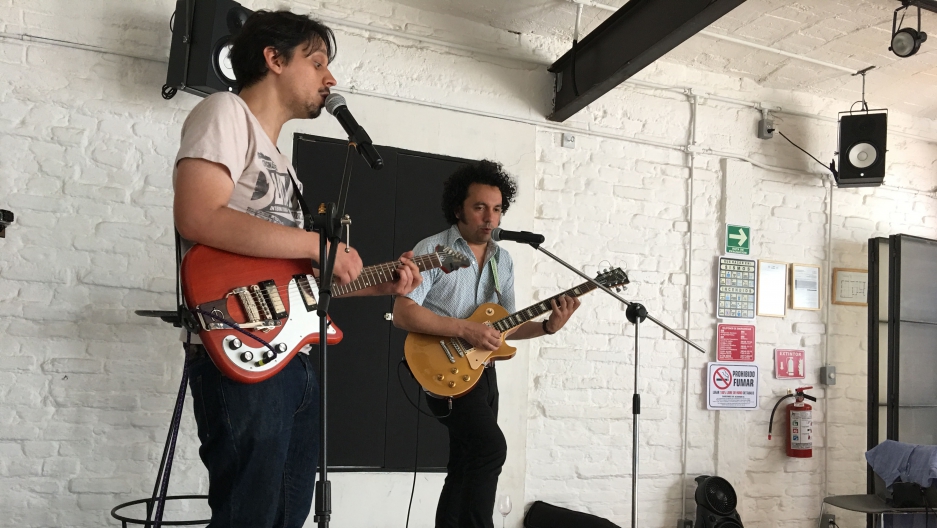 “Here in Mexico, it’s different. Being an artist is important again," said Ulises Hadjis, performing on a recent Sunday afternoon in Mexico City with José Luis Pardo of the popular Venezuelan band, Los Amigos Invisibles. Hadjis is new to Mexico, moving from Maracaibo, Venezuela, where he said it was an uphill climb to perform and teach, after the country's hyperinflation zapped his income, and with fewer people able to buy music or afford concerts.

The news out of Venezuela isn’t getting any better, with no resolution in sight to help the political and economic crisis. Meantime, food and medicine can still be hard to find, and street protests are now regular. This week also saw a group of government supporters attack opposition lawmakers with wooden sticks and metal bars, while national guardsmen stood by.

So, more Venezuelans are leaving, building communities elsewhere, including in places like Mexico City.

Eduardo Vejar García, 27, now calls the megalopolis home, after leaving Caracas about a year ago. He thought he would have returned by now. “I thought the situation would be different, but I was wrong,” he says. 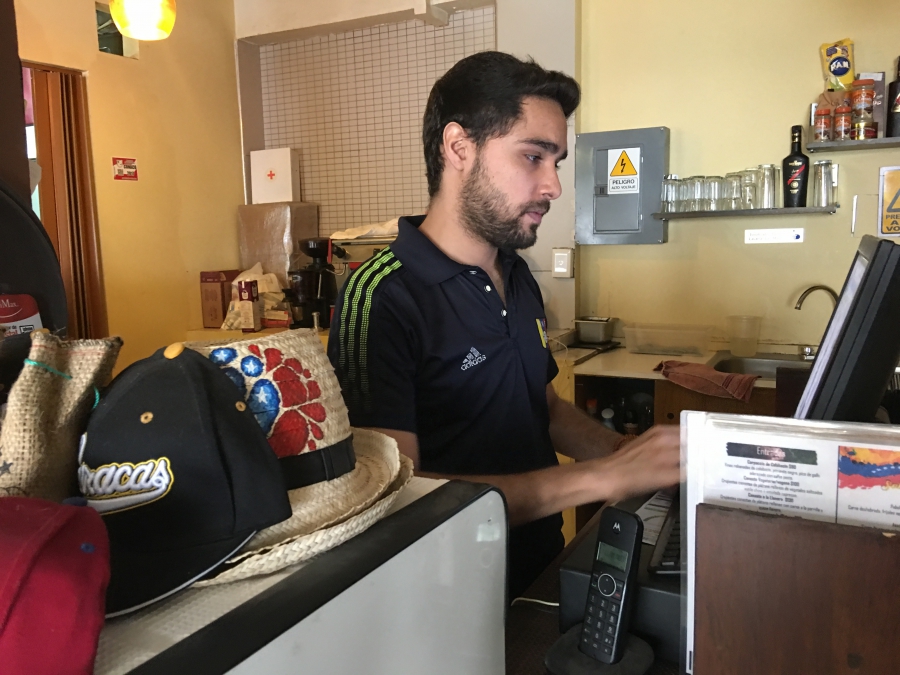 Eduardo Vejar García, 27, now calls Mexico City home, after leaving Caracas about a year ago. He thought he would have returned by now. “I thought the situation would be different, but I was wrong,” he says.

While he works, Vejar keeps an eye on the news, with a television tuned to VPITV, an independent news channel on YouTube. The story of the day was about a protest that led to injuries. Much like most days now.

It was Vejar’s older brother who persuaded him to move. “He asked me, ‘Eduardo, why don't you try to come here. Be stable, in Mexico,’” he says.

Vejar, who studied communications and business in Caracas, quickly found work at Ina’s, one of several Venezuelan restaurants popping up in Mexico City. It’s a slice of home, with its Venezuelan food, flags and hats and sports memorabilia hauled up from Caracas in a suitcase that sits behind the counter. There are jerseys for the baseball and soccer teams, Leones del Caracas and Caracas Fútbol Club.

He also points to a favorite hat, featuring the Venezuelan flag — his flag, he says. 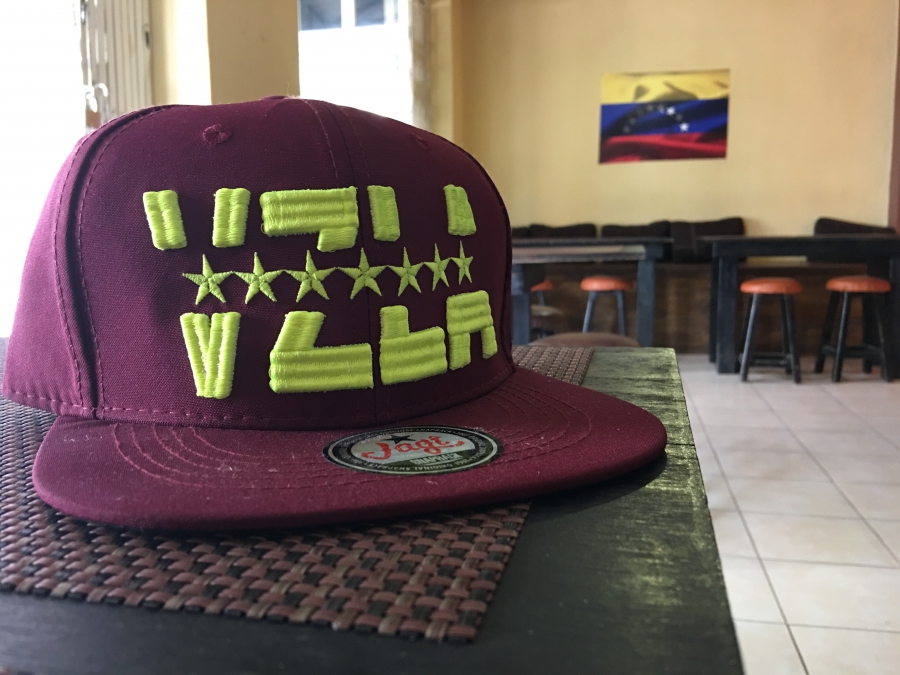 A hat for sale at a Venezuelan restaurant in Mexico City features seven stars, not eight like on the country's current national flag. In 2006, then-President Hugo Chávez added the extra star to honor Simón Bolívar. “Really, for me, my flag is with seven stars because I never believed in his government,” said Eduardo Vejar, who works at the restaurant and moved to Mexico about a year ago.

It has seven stars, not eight like on Venezuela’s current national flag. In 2006, then-President Hugo Chávez added the extra star to honor Simón Bolívar, who liberated Venezuela and much of South America from Spain.

“Really, for me, my flag is with seven stars because I never believed in his government,” Vejar says.

It’s his own small protest from afar, but Vejar knows the price some protesters pay in Venezuela. At least 90 people have died in the violence, including Miguel Castillo, one of Vejar’s college friends. He was also 27 when he was shot at an anti-government protest in May.

“He was a person who believed in his country and died fighting for his country,” says Vejar.

But, for now, he’s sending cash — and medicine — to his two small sisters in Venezuela and his mom, who has cancer. Vejar says helping his family from Mexico is like being on a plane that starts losing altitude fast. Grab your oxygen mask first.

“I think the situation is the same,” Vejar says. “For example, my brother left, and now he’s helping me, yes?” Now, they both help their mom.

And on a recent Sunday not far from the restaurant where Vejar works, Ulises Hadjis, a musician in his 30s, prepared to put on a small show at a cultural center.

He is also new to Mexico and said he’s here because he can do what felt like an uphill climb in Venezuela, where hyperinflation basically zapped his income and nobody could afford to buy music or see him perform.

“Here in Mexico, it’s different,” he says. “Being an artist is important again."

Hadjis withstood Venezuela’s decline for years. “It was really hard for me and my girlfriend to get water, like running water,” he says. “We had running water for like 15 minutes a day.”

And now, increasingly, there is the lack of food. Hadjis said that he sees photos of people back home. They look different. “Tons of the people I know are really thin now,” he says. “They say it’s the 'dieta de Maduro,' "Maduro’s diet,"” he says, referring to Venezuela’s president, Nicolás Maduro.

For Hadjis, though, the tipping point was violence. The store his girlfriend worked at kept getting robbed. “She got robbed too many times,” he said. “I think for most people I know, that’s when they said, 'This is it.'”

He said going back isn’t an option.

Hadjis also talks about another song he’s made here called “Amuleto,” or "Amulet." “It’s all about the feeling that I had leaving Venezuela, and the people in the streets protestando,” he said.

Protesting or, in the case of more Venezuelans, leaving.