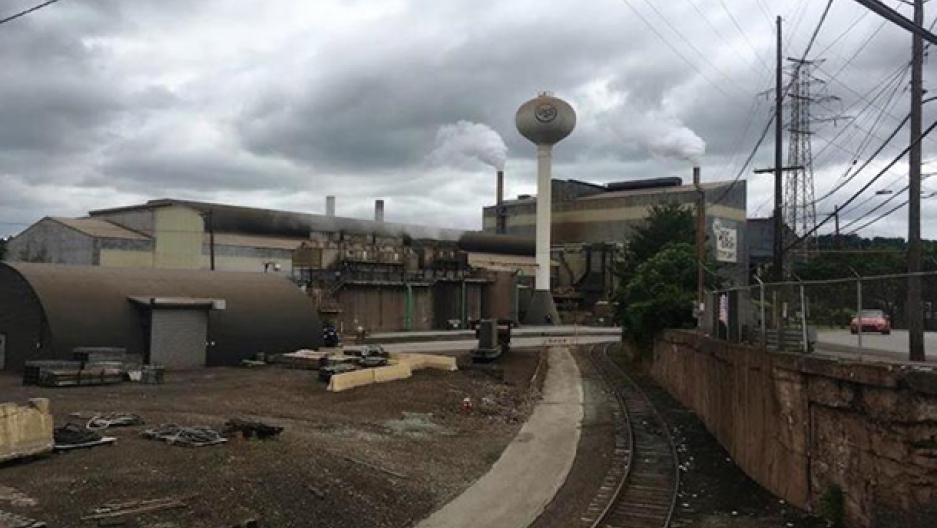 Pollution from US Steel's Edgar Thomson steel mill in Braddock, PA eventually makes its way into the lungs of children in nearby school districts, raising asthma rates significantly.

A survey by a Pittsburgh pediatrician of 1,200 children living near some of the biggest polluters in the area shows that children who live near sources of pollution run the same risk of developing asthma as those exposed to secondhand tobacco smoke.

US Steel’s Edgar Thompson Works in Braddock, just outside of Pittsburgh, has been making steel for almost 150 years. Nearby residents, including the children of the Woodland Hills School District, have been breathing in the pollution the plant spews from its stacks, and researchers are finding that it's impacting their health.

“For years we've had school nurses tell us a large percentage of children have asthma, that up to half the kids in our schools might [need] an asthma inhaler,” says Deborah Gentile, an allergy and asthma specialist with the Pediatric Alliance. For two years, Gentile, who is also an adjunct professor of pharmacy at Duquesne University, has been collecting data on asthma rates among elementary school children who live near sources of pollution, such as the steel mill, Cheswick Power Station in Springdale and Clairton Coke Works.

“It's running about 35 percent. Of those, about two-thirds of them, or 24 percent, actually know they have asthma,” Gentile says. “We're diagnosing new asthma in about 10 percent.”

In Allegheny County as a whole, asthma rates among children are about 13 percent. By comparison, the national asthma rate is about 8 percent.

Gentile’s method is straightforward: She sends children home with a simple, four-question survey for their caretakers to fill out, asking how often the child has experienced symptoms such as wheezing, coughing or trouble breathing. Gentile compared the results of her survey with Carnegie Mellon University data and found that kids who live near sources of pollution are more likely to have asthma.

Because these particles are so small, they embed deep into the lungs. Particulate matter has been linked to health problems such as lung cancer, asthma attacks and even premature death, according to the American Lung Association. Nitrogen dioxide also contributes to kids developing asthma or having more frequent attacks. Gentile says she’s particularly troubled by another aspect of the data.

“Near these point sources of pollution, we tend to see more minority families, as well as more [people of] lower socioeconomic status, and that's what researchers find in other cities as well. These are the people who can't afford to live elsewhere,” she points out.

Gentile says pollution, and the asthma it causes, can have far-reaching consequences in a child’s life.

“As a doctor who takes care of children with asthma, I see them missing school, not being able to participate in activities, they're not sleeping at night, their parents aren't sleeping at night. It has a tremendous impact on their life,” she says.

Gentile and her team are currently compiling all of the data from her surveys and expect to put out a full report later this year, with the goal of spurring government action. To start, she’d like to see asthma screenings mandated in schools. She’s hopeful the data showing a third of children near these pollution sources have asthma will be the push policymakers need to clean up the air in Allegheny County.

This article is based on a report by Liz Reid of the public radio station WESA and the Allegheny Front. The report aired on PRI’s Living on Earth with Steve Curwood.