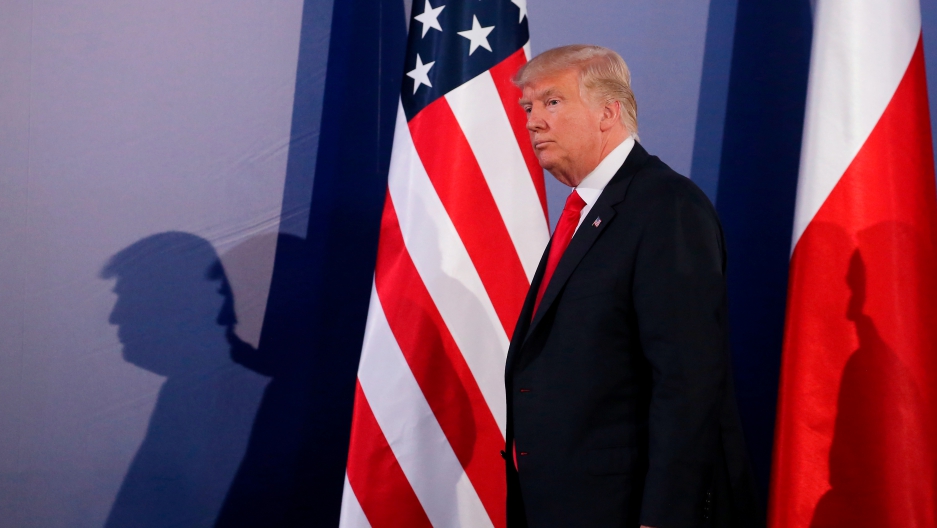 On the eve of what is likely to be a prickly G20 summit, President Donald Trump warned that the future of the West was at risk.

Trump, facing animosity from traditional US allies, he will use his address in Warsaw to warn that a lack of collective resolve could doom an alliance that endured through the Cold War.

"The defense of the West ultimately rests not only on means but also on the will of its people to prevail," Trump will say, according to excerpts released by the White House.

"The fundamental question of our time is whether the West has the will to survive."

Just a day before he meets Russian President Vladimir Putin for the first time at the gathering of G20 leaders in Germany, Trump described Moscow's behavior as "destabilizing."

He also conceded that Russia "may have" tried to influence the 2016 election that brought him to power, but suggested others too may have been involved.

Looming large over his entire European trip is Pyongyang's test of an intercontinental ballistic missile that could deliver a nuclear payload to Alaska.

In his first public remarks since the test Tuesday, Trump said Pyongyang's military sabre-rattling must bring "consequences" and warned he was considering a "severe" response to its 'very, very bad behavior."

After repeatedly urging Beijing to ratchet up the economic pressure on North Korea, Trump will hold what promises to be a testy meeting with Chinese President Xi Jinping at the G20 in the northern German city of Hamburg.

In his Warsaw address, Trump will paint a picture of liberal democracies facing existential internal and external challenges, of nations battling to defend "our civilization" from terrorism, bureaucracy and the erosion of traditions, according to the extracts.

The White House hopes to use the speech — with its echoes of historic Ronald Reagan and John F. Kennedy's addresses overseas — to burnish his credentials as a global statesman and deflect suggestions he is making the United States a virtual pariah.

Organizers expect thousands of people to attend, many arriving on free buses provided by Poland's conservative ruling party, which is eager to ensure Trump gets the adulation he craves.

"It is important that President Trump feel good about his visit to Poland," Stanislaw Pieta, a member of parliament for the Party of Law and Justice told the AFP.

That should provide welcome relief from the cool reception he is likely to receive elsewhere.

"After his disastrous trip to Brussels and Taormina, friendly pictures with European leaders and cheering crowds at his public speech could help Trump repair his image at home," said Piotr Buras of the European Council on Foreign Relations.

During the speech at Krasinski Square — which memorializes the Warsaw uprising against Nazi occupation — Trump will point to Poland as an example of resolve in the defense of Western traditions.

"We must work together to counter forces, whether they come from inside or out, from the South or the East, that threaten over time to undermine these values and to erase the bonds of culture, faith and tradition that make us who we are."

Trump will also issue a Reaganesque call to tackle bureaucratic overcontrol, which he will frame as more than just an inconvenience or byproduct of a rules-based society.

While Trump positions himself as a leader with the vision to confront an epoch-making crisis, for many US allies in Europe and beyond it is Trump himself who has called the world order — and a century of American global leadership — into doubt.

"Trump's decisions to pull out of the Trans-Pacific Partnership and the Paris climate accord have dealt a blow to the near-global consensus," said Dmitri Trenin, director for the Carnegie Moscow Center.

In public, European officials profess the decades-old transatlantic partnership to be inviolable and essential.

In private, they wonder whether it can survive four or eight years with an impulsive and capricious US president at the helm.

Trump's four-day swing will continue to the northern German city of Hamburg later Thursday for his first G20 summit, where tricky geopolitical currents — from rumbling transatlantic discord over defense and climate change to increasingly difficult ties with China — will converge.

Friday's meeting between Trump and Putin will — among other things — be pored over for its significance to US domestic politics.

Even simple photographs of Putin and Trump shaking hands or meeting face-to-face pose a political risk for the US president and will likely be weaponized by his foes in the United States.

Several of Trump's closest aides are under investigation for possible ties with Moscow, which US intelligence agencies say tried to tilt the November election in the Republican candidate's favor.

The scandal continues to eat away at his administration, with key White House staff being forced to hire their own lawyers and spend time rebuffing new allegations.