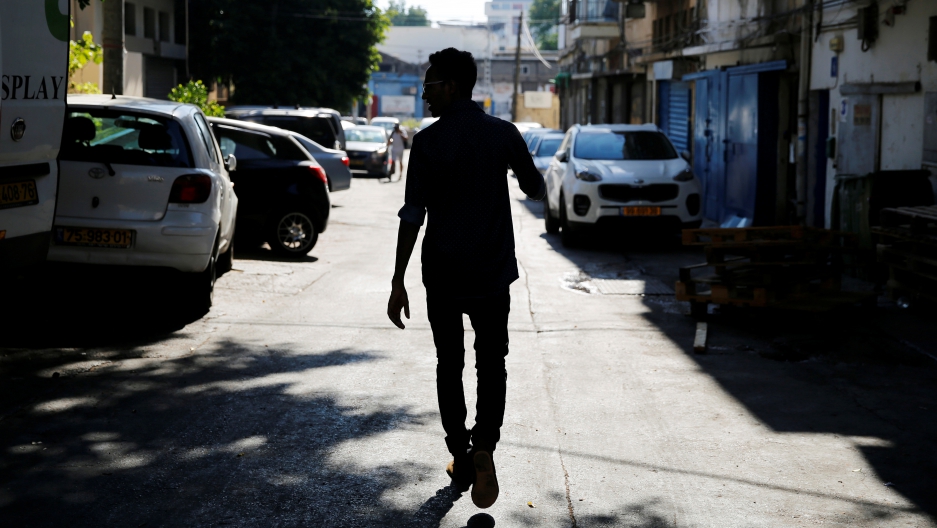 Teklit Michael, 29, an asylum seeker from Eritrea, is silhouetted as he walks home in Tel Aviv, Israel June 25, 2017.

“I met Afie Semene in the capital of Uganda. It was the tail end of his journey,” he says.

Semene was depressed, living in the shadows and eaten up with resentment toward the Israeli government — which, he said, lied to him.

Semene’s journey started when he fled mandatory military service in Eritrea. He made his way to Israel, where he lived and worked for seven years. Semene was eventually forced into a detention center in the Negev desert called Holot. That’s when the Israeli government offered him a choice: He could stay imprisoned indefinitely in Holot or accept departure to an African country (which later turned out to be Rwanda), where he would get work papers and legal status.

Semene chose the latter — but it didn't work out as planned.

The following is an excerpt from Green's story in Foreign Policy. Read the complete story at ForeignPolicy.com.

The man picked Afie Semene and the 11 other Eritreans on the flight from Tel Aviv out of the stream of disembarking passengers as if he already had their faces memorized. He welcomed them to the Rwandan capital, Kigali, and introduced himself as John. He was a Rwandan immigration officer, he explained, there to help smooth their arrival. He collected the travel documents each of them had been issued in Israel and led them past the immigration counter where the rest of the passengers from their flight queued. Nobody stopped them. Nothing was stamped.

They paused briefly at the luggage carousel to scoop up their bags. In the nearly seven years Semene had lived in Israel, he filled an apartment with furniture and kitchen supplies. But when officials there summoned him to a detention facility for asylum-seekers, he had distributed much of what he owned among his friends, unsure if he would ever return. Now his suitcase contained little besides clothes.

The group exited the airport into the humid Rwandan night and crowded into a waiting pickup. The luggage followed in a second truck. The small convoy wound its way through lush, hilly Kigali, past the fenced campus of the regional polytechnic, and into a quiet neighborhood several miles south of the airport. They came to a stop in front of a house the color of a pistachio nut, its second story ringed with white-trimmed porches. Dawn was already breaking as the new arrivals were shown to bedrooms inside. As he fell asleep, Semene still remembers the feeling of relief wash over him. John would return the next day to help them begin their asylum applications, he thought. Maybe he would arrive with the papers granting them refugee status already in hand.

Instead, the next day brought new despair: There would be no visas. No work permits. No asylum. None of the things Israeli authorities had promised the 12 Eritreans when they had agreed to relocate to Rwanda a few weeks prior. Instead, John offered to smuggle them into neighboring Uganda, which he told them was a “free nation.” “If you live here, you can’t leave,” Semene recalled John saying of Rwanda. “It’s a tight country. Let me advise you, as your brother, you need to go to Uganda.”

Green, in his year-long investigation, showed that Semene is not alone.

Green documents numerous cases where African refugees were taken from Israel to either Rwanda or Uganda and then abandoned — often right into the hands of traffickers or into other situations where they might be persecuted or killed.

Related: When Israel sends African men away, the women are left behind