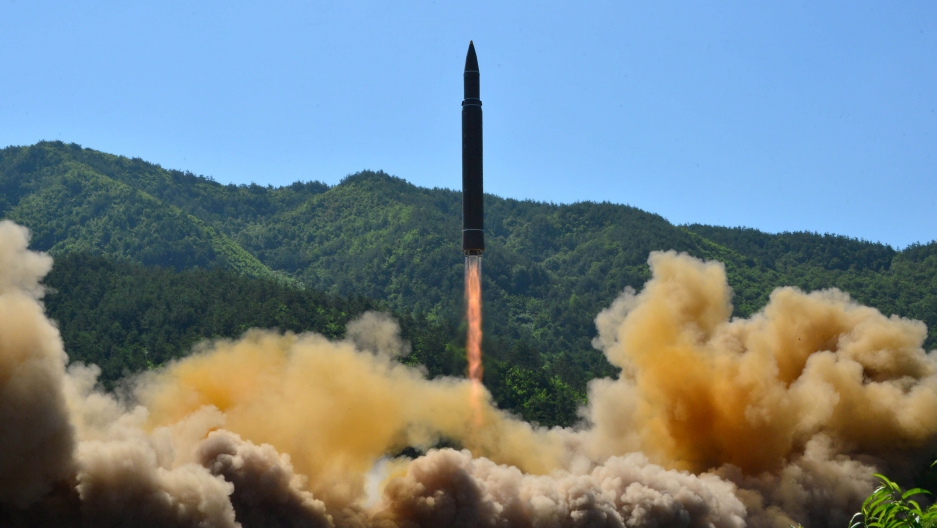 This is a North Korean image said to be the launch of that nation's first intercontinental missile on July 4, 2017.

North Korea has a working intercontinental missile that can hit US soil. It will only be a matter of time before the regime of Kim Jong-un can miniaturize a nuclear warhead to put in it. So, the question is what should the US do about it?

No one is suggesting Kim would randomly try to nuke America. “However ruthless and brutal Kim Jong-un is to his own people,” says Joseph Cirincione, “he’s not suicidal.”

Cirincione is president of the Ploughshares Fund, a global security think tank in Washington, and author of "Nuclear Nightmares: Securing the World Before It's Too Late."

North Korea wants to deter US-led aggression, after seeing what happened in Iraq in 2003 and Libya in 2011.

“However,” Cirincione adds, “that doesn’t mean they’re not a threat. A nuclear-armed North Korea would still pose an uncertain challenge. Unlikely to attack the United States first. But by no means an impossible scenario. That’s why for decades both Republican and Democratic presidents have tried to prevent this eventuality.”

But what can the United States do?

Some voices, including the editorial page of The Wall Street Journal, have argued for regime change. But Cirincione and most other experts are skeptical.

“That’s a pipe dream,” he says. “Pursuing that is a path to failure.”

That kind of confrontation would likely lead to a catastrophic war with a desperate regime that can already hit Japan with nuclear missiles and could flatten the South Korean capital, Seoul, with conventional artillery. Pentagon war games forecast hundreds of thousands of casualties for the US and its allies and severe damage and disruption to the world economy.

Another approach that has been discussed is to try to damage directly North Korea’s weapons programs. There are reports of covert action and cyberattacks, but they have self-evidently failed to prevent North Korea from getting to this point.

“This is not Syria. North Korea hits back.”

So, some are now discussing a more kinetic approach, through limited military strikes on regime launching sites and production facilities. Cirincione argues that that carries the high probability risk of retaliation and potentially catastrophic escalation.

“This is not Syria. North Korea hits back,” he says.

“The idea that somehow you can strangle the North Korean regime, or wait out this hermit kingdom, has been something that American policymakers have tried for decades,” says Cirincione. “They have pursued that one way or the other. It has failed. This is an entrenched regime that shows no signs of collapse, no signs of weakening. In fact, the North Korean economy is growing.”

“There is no way to coerce North Korea into compliance or collapse,” he says.

“So, even though you’d like to find a military solution, a sanctions solution, a ‘China, please take care of this for us’ solution, none of these show any sign of working,” Cirincione says. “And that leaves you with the least bad option: negotiations.”

Cirincione and others argue that the West should ask for a freeze on North Korea’s nuclear and missile programs.

“You’d offer them what they want,” he says, “security and prestige. Those are the two main reasons countries have pursued nuclear programs over the last 70 years.”

“Practically, that looks like what they’ve said they want: a suspension of the [joint] South Korean and US military exercises that we conduct routinely,” he explains.

“That’s problematic. We don’t want to do that. That is a mainstay of our defense commitments to South Korea,” he adds. “But there may be a slicing and dicing of this. Maybe a reduction of those exercises, maybe an elimination of the decapitation strikes that we exercise regularly; coupled with security assurances and a path towards achieving what the North Koreans say they want, a peace treaty with the United States — one that would finally end the Korean War.”

Historically, Cirincione argues, negotiations have brought about deals that have been more or less respected by Pyongyang. The most important agreement, in 1994, succeeded in freezing North Korea’s programs relatively effectively until the administration of George W. Bush overturned it.

But there are problems. This kind of negotiation requires deft diplomacy, good judgment and discipline. The World asked Cirincione if President Donald Trump's administration is up to the task.

“God, I hope so,” he replied. “But it’s really problematic. This is a president that is basically home alone. They haven’t appointed any of the kind of personnel that would know what they’re doing, that have experience. For example, we don’t have an ambassador to South Korea right now. We don’t have an assistant secretary for nonproliferation at the State Department or an assistant secretary for East Asia at the State Department or at the Department of Defense.”

“One of the things this crisis reveals is that when you take a close look at the foreign policy, the national security policy of the Trump administration, there is nothing there. There is no plan. There is no doctrine. There is no strategy. There’s a set of impulses and tweets.”