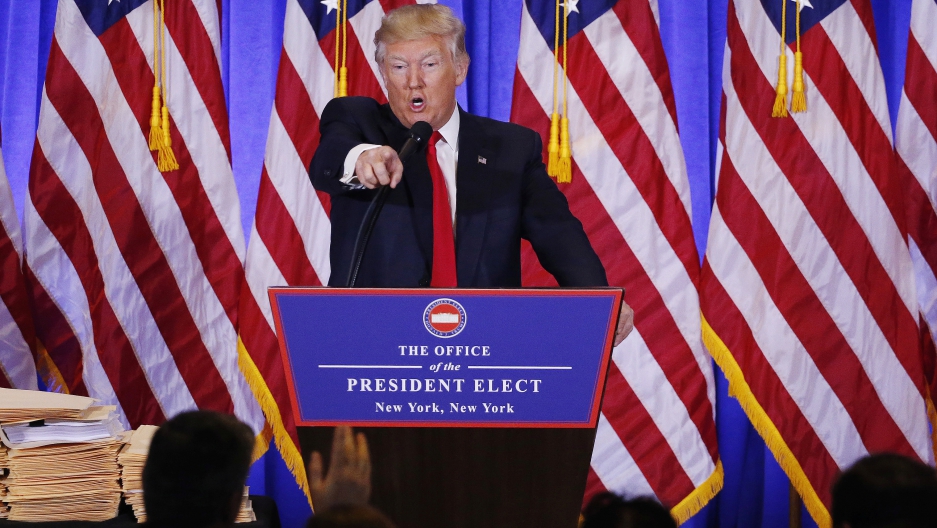 Donald Trump, then US president-elect, argues with CNN's Jim Acosta during a news conference in the lobby of Trump Tower in Manhattan, New York City on January 11, 2017.

And when he saw that President Donald Trump had tweeted out a video of himself, wrestling to the ground a man with a CNN logo covering his face, he couldn’t help but think of his research.

“It’s something where a lot of his base will find it amusing,” says Klaas. “I don’t find it amusing at all because I’ve interviewed many journalists who have been tortured or kidnapped or jailed in authoritarian regimes and it's not a laughing matter.”

Klaas is the author of “The Despot's Accomplice: How the West is Aiding and Abetting the Decline of Democracy.” He says despots often start out by attacking the press.

“It’s a tried and true playbook... for leaders who do not want to take criticism, and instead of trying to correct the narrative they simply try to shoot the messenger, so to speak, and demonize the press.”

Klaas says that’s what he has seen happen in Turkey, under President Recep Tayyıp Erdoğan, in Thailand, after the military took charge in 2014, and in Hungary, under Prime Minister Viktor Orban.

Also: Turkey jails more journalists than any other nation

Of course, Trump has not gone as far as those leaders in suppressing the press. But, Klaas says, the video he posted might be making strongmen like these feel a little bit more secure.

“I don’t think if you’re a despot abroad you’re looking at Trump’s video on his Twitter, and thinking, you know, ‘If I jail or torture a journalist, the White House is going to call me and chastise me.'"

“When Trump leaves office there are going to be tens of millions of people who are not just more polarized than before, but simply do not trust the sources of information that are coming out of the mainstream news outlets,” he says.

The only solution, Klaas believes, is to fight back.

“We have a country that is founded on certain principles, and a free, independent press that is respected is an important part of that,” Klaas says. “I think we can’t lose sight of that, no matter what."