A herd of endangered Przewalski's horses trot across the Takhin Tal National Park, part of the Great Gobi B Strictly Protected Area, in southwest Mongolia, on June 22.
Credit:

Przewalski's horses once roamed Central Asia in abundance, but they met a similar fate to many species the planet has known: Hunters and expanding farmland wiped them out.

The wild horse was driven to extinction in the 1960s. But members of the species have survived, in captivity in Europe. For the past decade, veteranary experts have slowly reintroduced the species to its age-old habitat.

Last month, the Prague Zoo released four Przewalski's horses into the Gobi desert, Reuters reported. They were the latest group of 27 of the rare horses Prague has set free. Officials estimate as many as 190 are now back in the wild.

A Przewalski's horse leaves its container after being released in Takhin Tal National Park, part of the Great Gobi B Strictly Protected Area, in southwest Mongolia, on June 20, 2017.

Prague Zoo workers load a container with a Przewalski's horse into a Czech military airplane at Kbely Airport in Prague, Czech Republic, on June 19.

A veterinary doctor covers a tranquilized Przewalski's horse from the sun, in the village of Dolni Dobrejov near the city of Tabor, Czech Republic, June 18.

A veterinary doctor holds a tranquilized Przewalski's horse in the Czech Republic on June 18, before the horse is taken to Mongolia.

Przewalski's horses graze at an acclimatization enclosure in the early morning at the Takhin Tal National Park, part of the Great Gobi B Strictly Protected Area, in southwest Mongolia, on June 23.

Przewalski's horses graze on a meadow in the village of Dolni Dobrejov near the city of Tabor, Czech Republic, June 18.

A camel walks past a truck carrying Przewalski's horses on the way to Takhin Tal National Park, on June 20. 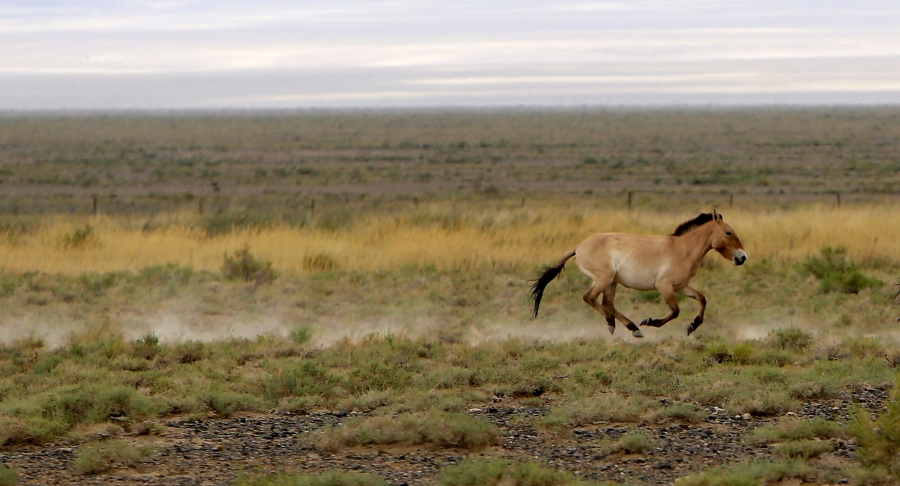 A Przewalski's horse trots across the Takhin Tal National Park in Mongolia on June 22.