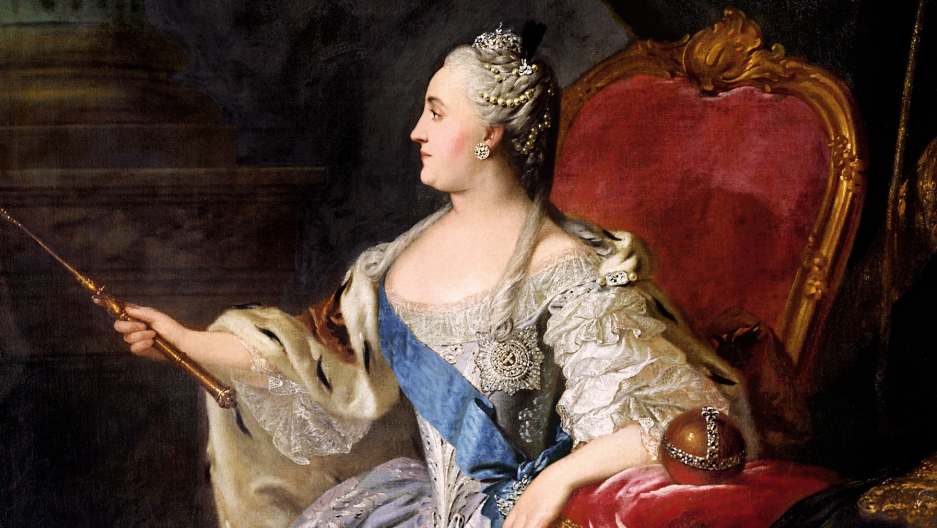 Catherine the Great of Russia, by Fyodor Rokotov

No man is an island. It’s as true in diplomacy as it is in ordinary life. And sometimes decisions made far away can have a big impact on our lives.

Russia was one of the great powers of the 18th century and, while far-off, its decisions had an impact on the outcome of the American Revolution.

The first significant impact was at the beginning of the war, before the Declaration of Independence was even a twinkle in Thomas Jefferson’s eye.

“Dear Catherine of Russia. May I please have 20,000 troops to crush American freedom. Regards, George.”

“You go to war with the army you’ve got.” That was the mantra of Defense Secretary Donald Rumsfeld in 2003 when challenged about America’s military readiness for the war in Iraq. The British faced a similar problem in 1775.

The Brits didn't realize they were in for a real fight with their colonists in America until the battle of Bunker Hill (or Breed’s Hill, if you want to be pedantic) on June 17, 1775. Britain had by far the biggest navy in the world, but its army, while good, was much smaller than its European rivals'. The key to crushing a revolt is to move swiftly and violently before rebels get organized. And in 1775, Britain simply didn't have the reserves of trained manpower to do this.

What Britain did have was plenty of cash. So it turned to Europe to see if it could purchase military help — and the first country that London turned to was Russia. London asked Catherine the Great of Russia for 20,000 men.

Why did Britain think Russia might help them end the American rebellion?

There were two main reasons Britain thought Russia would agree to help: The Russians needed the money, and they hated rebels.

Russia had just concluded a successful but expensive war against Turkey, and it was also putting out the last flames of a peasant and Cossack revolt in the south, the so-called Pugachev rebellion.

So Russia had more troops than they really needed for peacetime, and a serious need for cash. The Brits hoped to have 20,000 battle hardened Russian troops in Boston by the end of 1775 or early in 1776. It's hard to imagine, but you could have seen Cossacks watering their horses in the Charles River.

In the end, the Russians decided not to help Great Britain. They strung out the talks, and then said no.

So why did Russia make that decision?

Well, let's not kid ourselves that Russia had the interests of the American colonists at heart, or that it had any concern for the future of liberty. Russia, then as now, acted only in the interests of Russia and its rulers. And Russia, like all the other great powers in Europe, believed Britain needed to be cut down to size.

Britain had swaggered through the 1760s, after its victories in the French and Indian War, thinking it was better and more powerful than any rival. It had cornered most imperial markets for itself, and it dominated trade. So it was pretty unpopular.

Other countries have been in that position, at different times in history, and the way to manage is to cultivate friends and allies. However, Britain's foreign policy in the decade before the revolution had been too incoherent, and it paid the price during the war. That's a lesson for any superpower in any age.

How did that Russian decision impact the American Revolution?

The Russian decision not to sell troops to Britain had a significant strategic impact. It imposed a delay on the British mobilization for war with the colonists. It was only after Catherine of Russia said no that the Brits turned to the Hessians, from Germany, to provide them with the manpower they needed. But the delay might have been critical.

As a result of the Russian diplomacy, Britain was forced to delay its counter-offensive against American patriots until August 1776.

Had a division of Russian or Hessian troops arrived in Boston in late 1775 and driven away Washington's infant continental army, that could have swayed a lot of minds in America as to the wisdom of even declaring independence. Instead, the rebels were able to get much more organized, dig defenses, obtain resources like gunpowder and cannon and provide their troops with training and equipment.

It also allowed the patriots to consolidate political power, intimidate their opponents at home, and eventually even to dare to declare independence. Once that bridge had been crossed it was almost impossible to go back and find a compromise with the mother country.

“Dear Catherine of Russia. Please help me end this war. I’ll give you a lovely island in the Mediterranean. Love, George.”

There were several other times Russia indirectly affected the course of the American Revolution. The most significant was in 1780. By that year, the war was at a stalemate. France and Spain had intervened on behalf of America. But Britain had managed to hold on, against all odds. The American rebels were broke. If either side could gain another ally, it might tip the balance.

Russia started putting together a loose alliance with other northern powers, called the League of Armed Neutrality. It involved Sweden, Denmark and Holland. The idea in Russia was to force everyone to make peace, and cut a deal that would benefit Russia. It's what diplomats call an "armed mediation."

Britain's spies got wind of it, and tried to head off this intervention by attacking Holland and trying to bribe Russia.

This time, the idea was to offer the Russians an important colony. The prize the Brits offered was the island of Minorca, part of modern day Spain in the Mediterranean, which belonged to Britain at the time. It was a huge naval base and a warm water port — something Russia had coveted for decades.

The English and Russian diplomats believed France, which was struggling to pay for the war, would agree to make peace rather than fight a wider war.

For Russia, it would have been a win-win: the achievement of a long-term strategic goal, without much fighting.

A mediated peace would have left Britain with New York, Maine, Virginia, Georgia and the Carolinas, and a solid claim to everything west of the Appalachians.

It would have been even better for Britain if France had quit the war and made peace separately from its American allies. In that case, England could legitimately throw its full strength against the rebels.

Again, Russia was purely acting out of self-interest, seeking territorial gain for itself. Russia would have been quite OK if the American Revolution had been destroyed as collateral damage. Who likes free-thinking rebels anyway?

Sounds like a smart plan. So what went wrong?

This time, it was Britain that backed away. In early 1781, good news arrived in London from the battlefields of the American South and intelligence assessments suggested France was out of cash and out of credit. It couldn’t get new loans to finance its war effort.

London assumed the French would end the war rather than risk a collapse of their own government. King George and his cabinet changed their minds about the Russian mediation and thought Britain could win the war on its own. They thought they should go for complete victory rather than settle for a partial success.

Big mistake! A few months later, the French navy was able to bring a decisive force to the coasts of Virginia and the Brits were beaten at Yorktown. The rest, as they say, is history.

The Russians considered retaliating against Britain. But they saw the Dutch get beaten by the Brits at sea and thought better of it. With Holland effectively neutralized, the Russians decided the risks outweighed the potential benefits of an open confrontation with Britain.

So all of this provides plenty of lessons for today’s diplomats and policy makers:

Finally, perhaps the biggest take-away for July 4, is to remember that the American Revolution was won by what looks like a series of miracles. That's what the founding fathers saw, and acknowledged, and were thankful for.