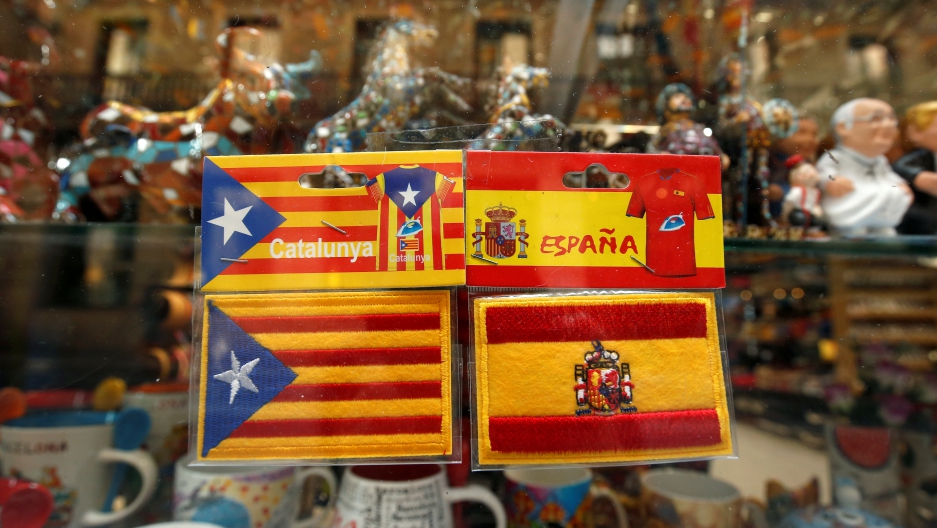 Patches of "Estelada" (Catalan separatist flag) and Spain flags are displayed in a souvenirs-shop in Barcelona, Spain June 15, 2017.

Catalonia will declare independence "immediately" if a majority of the Spanish region's voters opt for independence in a Scotland-style referendum called for October, its ruling coalition said Tuesday.

"If the majority of votes are for creating a Catalan republic, obviously independence will have to be declared immediately," said Gabriela Serra, a member of the separatist coalition that governs Catalonia.

Her comments came as the coalition presented a law aimed at extracting the northeastern region from Spain's legal system in a bid to circumvent all legal and practical challenges to organising a referendum — a move that will deepen tensions with Madrid.

The law will be submitted to a vote in the Catalan regional parliament, where separatists hold a majority, at the end of August.

Lluis Corominas, another regional lawmaker from the coalition, announced the law would "prevail" over other rules in place.

But while the lawmakers unveiled the broad direction of the law, they did not reveal the text itself, nor the details.

Catalonia, a wealthy region of 7.5 million inhabitants with its own language and customs, has long demanded greater autonomy.

For years separatist politicians in the region have tried to win approval from Spain's central government to hold a vote similar to Scotland's 2014 independence referendum from Britain — which was approved by London — and resulted in a "no" vote.

But Madrid has remained steadfast in its opposition to such a vote, considering it a threat to Spain's unity, and this time is no different.

The Constitutional Court has already quashed a resolution approved by Catalonia's parliament calling for the referendum to take place.

It has also warned Catalonia's elected officials that they will face legal consequences if they take any steps towards holding such a vote.

Challenges from Madrid aside, Catalans themselves are divided on the issue.

Some 48.5 percent are against independence and 44.3 percent are in favour, according to a recent regional government poll — although a large majority want a referendum to take place to settle the matter once and for all.

On top of this, the Catalan executive has been wracked by internal debate over the issue, unable to find a way to guarantee the credibility of such a vote, if it ever manages to hold it in the face of Madrid's refusal.

It has no regional election authority to oversee the vote, for instance, and has not found any companies willing to provide ballot boxes.

Aside from the legal bans of the Constitutional Court, the central government has also threatened civil servants with sanctions if they help organise the referendum, and has warned companies against any involvement.

In an interview on Monday, Jordi Baiget, the regional councillor in charge of business, expressed doubt over whether the referendum could take place, given the power of Madrid.

But this was not to the liking of Catalonia's President Carles Puigdemont, who promptly announced Baiget's departure on Monday evening — a decision that was criticized by some of the most fervent supporters of independence.