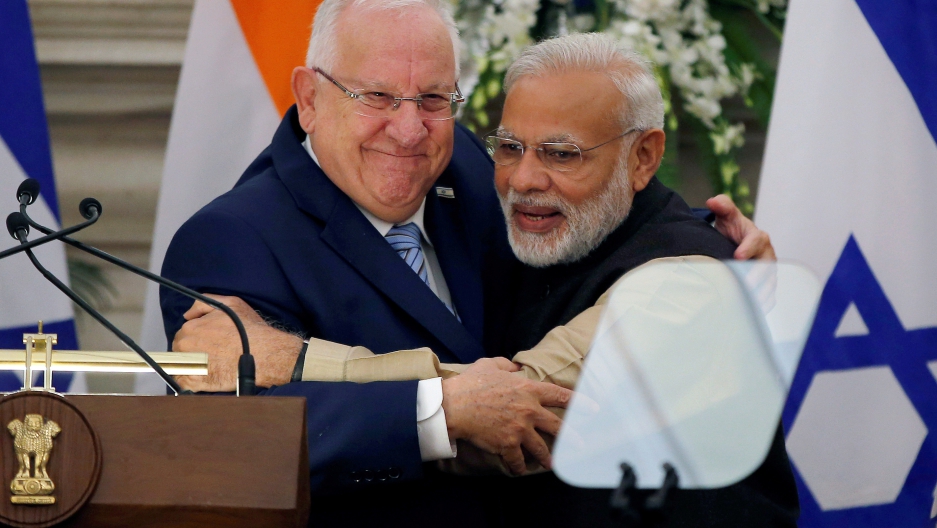 Narendra Modi becomes the first Indian prime minister to visit Israel when he arrives on Tuesday, the result of growing ties that have led to billions of dollars in defense deals.

Israel, in constant search of allies to vote in its favor at UN bodies as well as business partners, has been portraying the visit as historic. Israeli analysts have also noted Modi is not scheduled to travel to Ramallah to meet with Palestinian leaders during his three-day stay, as is common for many foreign dignitaries. Modi did however meet Palestinian president Mahmud Abbas in New Delhi in May.

Prime Minister Benjamin Netanyahu called the visit, which marks 25 years since the two countries established diplomatic relations, a "further expression of the state of Israel's military, economic and diplomatic strength."

"This is a very significant step in strengthening relations between the two countries," the Israeli leader said. "India is a huge country with over 1.25 billion people and is one of the world's largest, growing economies. Ties between Israel and India are on a constant upswing." Netanyahu said Monday that, in an unusual move and a sign of the importance Israel is placing on the trip, he would "accompany the prime minister at many events during his visit as befits the leader of the largest democracy in the world."

But while Israel, with a population of some eight million, has held the visit up as a diplomatic victory, both countries have practical reasons for the trip.

India is the world's biggest importer of defense equipment, and Israel has become one of its major suppliers. Israeli media have reported that the two countries see an average of more than $1 billion in defense deals each year.

India has been investing tens of billions in updating its Soviet-era military hardware to counter long-standing tensions with regional rivals China and Pakistan. It has signed several big-ticket defense deals since Modi's Bharatiya Janata Party stormed to power in 2014. In April, state-owned Israel Aerospace Industries said India would buy nearly $2 billion worth of weapons technology, making it the military exporting giant's largest ever defense contract.

The deal will see IAI provide India with an advanced defense system of medium-range surface-to-air missiles, launchers and communications technology

The two countries have also cooperated on issues such as water and agriculture technology.

Modi is to arrive at 4:00 p.m. on Tuesday and will have dinner with Netanyahu that evening. He will hold talks with Netanyahu and President Reuven Rivlin on Wednesday before meeting with members of Israel's Indian community.

Thursday's schedule includes a business lunch with CEOs from both countries.

"It is a common strategic agenda which includes a fear of Islamic radicalism, fears about Chinese assertiveness and in addition, of course, you cannot ignore the huge economic potential for both countries." Inbar added: "But for us it's a huge market."

Israel's 50-year occupation of the West Bank and failure to reach a peace deal with the Palestinians have been major stumbling blocks in its efforts to boost relations with certain foreign countries. India has traditionally voiced its support for Palestinian statehood, initially shunning diplomatic relations with Israel.

But the frost has thawed in recent years, with India seeking closer defense ties with Israel, particularly as New Delhi turns increasingly away from traditional ally Russia for its military hardware.

Hindu nationalist Modi makes the trip after his visit last week to Washington, where he and US President Donald Trump embraced each other as friends, vowing to work more closely on combatting terrorism, the war in Afghanistan and defense cooperation.

While ties with some US allies have been strained by Trump's complaints that Washington has been the loser in trade agreements, Modi appeared sensitive to his host's emphasis on transactional diplomacy. Modi may find similar common ground with Netanyahu, Israel's longtime right-wing prime minister who hosted Trump in May.

India is currently the world's fastest growing major economy, a status that Modi is hoping to cement by drawing in more foreign investment. He has sought to do that in part by encouraging manufacturers to do business in Asia's third-largest economy. Israel's defense deals have included components that will be assembled in India.