Eric Dzhakhpevych, 31, left Kyrgyzstan to work at Luzhniki Stadium in Moscow where fans will watch the opening match of the 2018 World Cup. Dzhakhpevych is one of many migrant workers who say they were victims of wage theft at Russia’s World Cup sites.

When Eric Dzhakhpevych found a construction job at Moscow’s Luzhniki Stadium, he entered the jobsite each morning past a statue of Vladimir Lenin below an unlit fluorescent light that curved into the words “Dobro pozhalovat” — the Russian phrase for “welcome.”

But for many of the migrant workers renovating Luzhniki Stadium, where soccer fans will gather to watch the opening match of the 2018 World Cup, the entrance can lead to dangerous jobsites managed by exploitative employers.

Dzhakhpevych, 31, left his home country of Kyrgyzstan for construction work in Moscow. His boss at Luzhniki Stadium promised to pay Dzhakhpevych and his coworkers when they finished a two-month job insulating ceilings. But at the end of the gig, their employer disappeared without paying.

“They said they would pay tomorrow, then they said it would be next week. And then a month went by,” Dzhakhpevych said. “But they still never paid us. The people we worked for just ran away.”

Stories of frequent wage theft at Russia’s World Cup sites now threaten to tarnish the world’s most popular sporting event. Russia has already spent $11.4 billion on World Cup infrastructure in 11 host cities that required new stadiums or extensive renovations on existing venues like Luzhniki Stadium. The projects have attracted thousands of workers from throughout Russia and the former Soviet republics, many of whom have experienced severe labor violations.

At least 17 workers have died working on Russia’s World Cup sites, according to researchers with the global trade union Building and Woodworkers International in Geneva. A new report by Human Rights Watch also documented widespread instances where construction workers laboring at Russian stadiums, many of them migrants from Central Asia, were cheated out of wages by construction companies.

Dzhakhpevych came to Russia hoping to send home enough money to pay his fiancée’s family a kalym, a traditional dowry, throw a nice wedding when he returned and finish building his house. Dzhakhpevych’s home consists of a two-story structure with open windows that the elements blow through in the Kyrgyz city of Osh, about 2,350 miles southeast of Moscow. 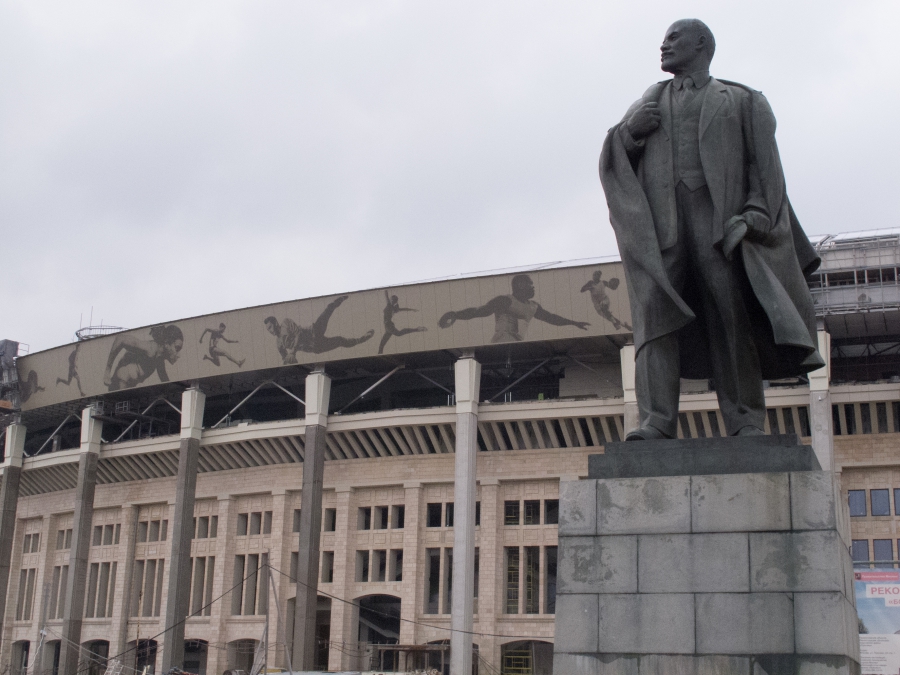 A Soviet-era statue of Vladimir Lenin stands outside Luzhniki Stadium in Moscow. Russia will host the 2018 World Cup in 11 host cities that need new stadiums or extensive renovations on older venues like Luzhniki Stadium.

A university graduate with a law degree, Dzhakhpevych says he can earn four times more on Russian construction sites than he did back home. But despite the potential benefits of working in Russia, many migrants meet few of their goals.

Dzhakhpevych and four friends from Kyrgyzstan found work at Luzhniki Stadium insulating ceilings for a company called Stroi Kachestvo. Their boss paid them each just $60 a week to get by. When they finished the job, Stroi Kachestvo owed the group about $2,000, according to Dzhakhpevych. He says the employer promised to pay them several days later, but instead their boss disappeared and his phone number stopped working.

Russian labor law requires employers to provide foreign workers with a signed contract specifying the terms of the job, but many fail to comply. The practice leaves migrants with few options for holding unfair employers accountable.

Foreign workers laboring on Russian construction sites commonly become victims of wage theft. But Dzhakhpevych says the reasons migrants get tricked by Russian bosses — even a trained lawyer like himself — are complex.

“Kyrgyz, Uzbeks, Tajiks — they’re mostly Muslim,” Dzhakhpevych said, “and they take a person for their word. So when a boss promises them something, they believe it and do the work. And at the end of the job, they don't get paid.”

Workers at five of Russia’s World Cup stadiums have gone on strike over unpaid wages. Other workers said they were forced to labor in freezing winter temperatures without adequate protection. And in one case, workers from Uzbekistan and Tajikistan were even arrested and deported from Russia for complaining about problems with their contracts.

Many workers at Russia’s stadiums said their bosses threatened to fire them for speaking about the working conditions. And workers aren’t the only ones who face retaliation. A researcher with Human Rights Watch was arrested and threatened by police for investigating labor conditions at a stadium in the Russian city of Volgograd.

“The atmosphere of control and intimidation and secrecy was something that we had never encountered before in Russia,” Buchanan said, “so there is a real concern about what those responsible for the World Cup have to hide.”

Soccer’s governing body, FIFA, has regularly inspected labor conditions at the stadiums for the first time ever in the lead up to a World Cup. FIFA has admitted publicly that there have been problems, but FIFA hasn’t stated what sorts of specific labor violations they found. In response to an interview request, FIFA sent a brief email maintaining that the working conditions at Russian stadiums are “paramount.”

The construction companies that have abused Russia’s World Cup construction workers, despite the inspections by FIFA, often violate a number of Russian laws. Public records revealed that Stroi Kachestvo, the company that failed to pay Dzhakhpevych, was located in a Moscow office building with no phone number. The company listed a starting capital of just $200, a common practice of Russian shell companies.

Workers who do experience employment-related abuses in Russia’s soccer stadiums have few avenues for demanding payment from their bosses. Advocates say that exploitation of migrant workers in Russia often persists because, simply, many Russians just don’t want foreigners in the country.

“People think that immigration is bad for the economy, that immigrants take away their job or that maybe migrants can be terrorists,” said Varya Tretyak, director of a program that provides legal aid to migrants at the Moscow nonprofit Civic Assistance Committee.

Tretyak used this information when she called the worker’s boss to intimidate him to pay. When the boss answered the phone, an accusatory tone replaced Tretyak’s friendly demeanor. But the employer insisted he had never heard of the worker. Tretyak hung up the phone and vowed to take legal action if he still neglected to pay after several more calls. 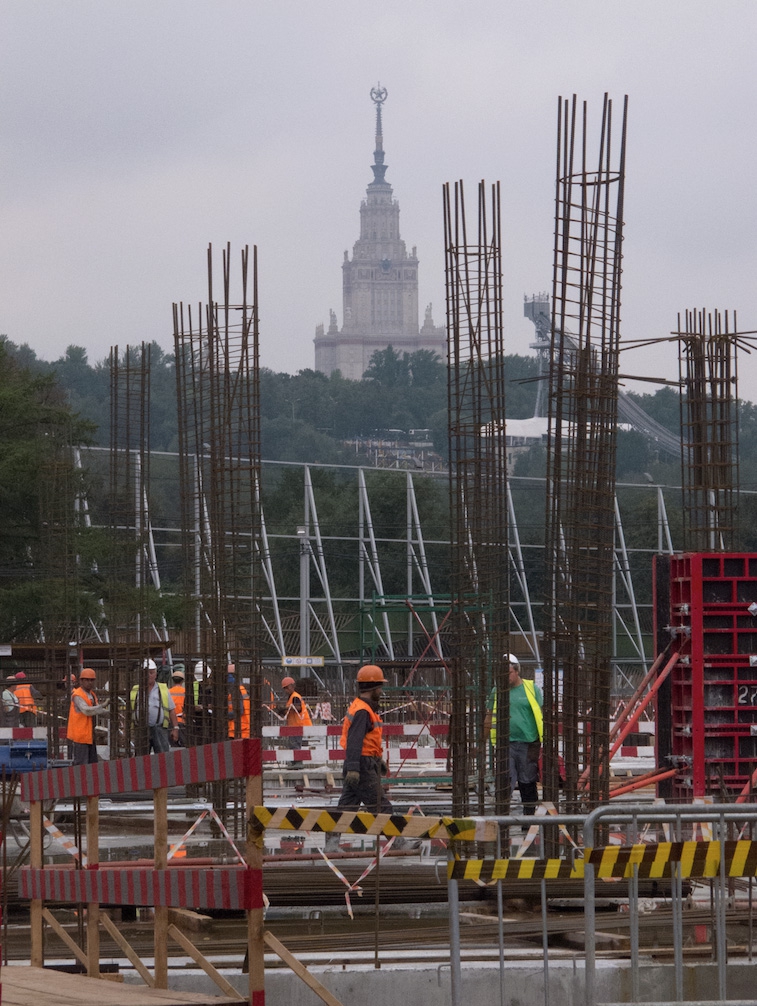 Construction workers at Luzhniki Stadium in Moscow say that wage theft is so common throughout the Russian construction industry that a culture of complacence has evolved. When a problem occurs, migrants usually just move on to another jobsite. The immediate pressure to send remittances back home, and the necessity to put a roof over your head, usually outweighs the time it would take to hold employers accountable.

“We have a proverb that says, ‘it’s good to be a guest, but it’s better to be at home,’” Dzhakhpevych said. “Here in Russia you just go to work in the morning, come home at night to sleep.”

Dzhakhpevych left Russia without saving enough money to finish his house in Kyrgyzstan. And, he said via email, he hadn’t even gotten married, yet.

Dzhakhpevych said he'd decided one thing: He planned to go back to Russia soon to find work at another construction site.