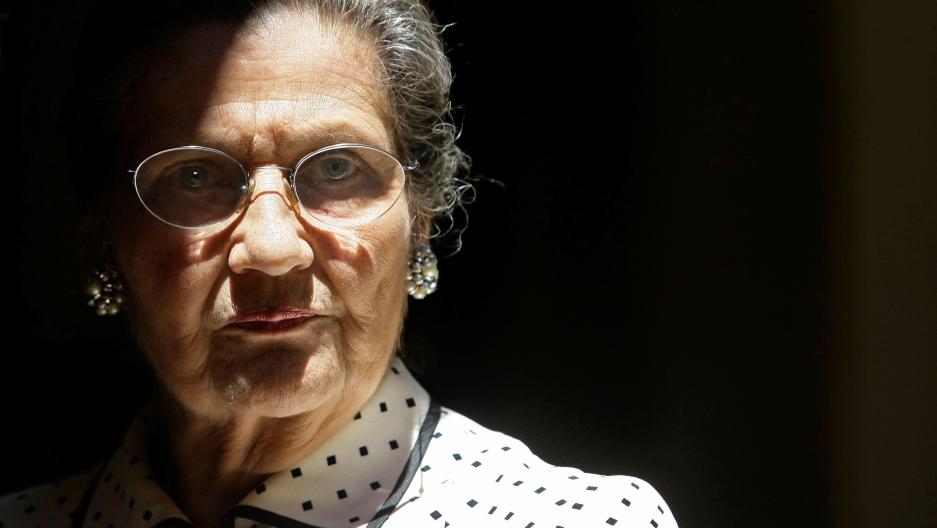 Simone Veil, a Holocaust survivor who became a French Cabinet Minister and President of the European Parliament, attends a cocktail event after receiving the "Charles V European Award 2008" from Spanish King Juan Carlos during a ceremony at the Monastery of Yuste, in the western Spanish region of Caceres, June 18, 2008.

Simone Veil, who died Friday aged 89, survived Auschwitz and went on to become one of France's most respected politicians, steering through landmark laws to liberalize contraception and abortion.

Sending condolences to her family, French President Emmanuel Macron tweeted: "May her example inspire our fellow citizens, as the best of what France can achieve."

Born Simone Jacob in the Mediterranean city of Nice on July 13, 1927, she was arrested by the Gestapo in March 1944 and deported to Auschwitz with one of her sisters and her mother Yvonne.

The two girls, who were put to work in a concentration camp, survived — as did another sister who was deported for her part in the French Resistance.

Veil's mother died of typhoid in Belsen just before the camp was liberated in 1945 and her father and brother were last seen on a train of deportees bound for Lithuania.

"Sixty years later I am still haunted by the images, the odors, the cries, the humiliation, the blows and the sky filled with the smoke of the crematoriums," Veil said in a TV interview broadcast in 2005.

After the war, she studied law at Sciences Po, the elite school of political science in Paris, where she met her husband Antoine Veil, who died in April 2013.

The couple had three sons, one of whom, Claude-Nicolas, died in 2002.

As a young judge she lobbied for improvements in prison conditions, and, in 1970, became the first female general secretary of the Council of Magistrates.

It was the springboard for a political career that fundamentally changed France.

In 1971, feminists began a campaign to overturn France's ban on abortion, attacking the stigma of pregnancy termination and women's deaths in backstreet operations.

Veil threw herself into the battle, setting up an organization to defend women who were prosecuted for abortion.

A member of the center-right Union for French Democracy, she was named health minister under president Valery Giscard d'Estaing and led a battle that marked her generation: the legalization of abortion.

Veil led the charge in the National Assembly, where she braved a volley of insults, some of them likening terminations to the Nazis' treatment of Jews.

In a chamber where there were just nine women and 481 men, the 25-hour debate is remembered for Veil's calm, measured opening speech as much as for the hostility of some of her opponents.

One lawmaker accused Veil of "genocide" and another spoke of embryos "thrown into the crematorium ovens."

"I did not imagine the hatred I would stir up," Veil said in a 2004 interview.

"There was such hypocrisy," she said. "The assembly was mainly filled with men, some of whom were secretly looking for contacts to arrange an abortion for a mistress or a member of their family."

The legislation — named the "Loi Veil" (Veil Law) — is today considered a cornerstone of women's rights and secularism in France.

A staunch believer in European integration, Veil went on to become the first elected president of the European Parliament in 1979, a position she held for three years.

She last held major public office between 1998 and 2007, as a member of France's Constitutional Council.

Instantly recognizable by her hair, which she always wore in a sleek bun, and her Chanel suits, she was consistently voted one of France's most trusted public figures.

Her memoir "A Life" became a best seller, with more than half a million copies sold.

She was also frequently associated with commemorations of World War II.

Her experience left her with no tolerance for the far-right National Front, and in 1983 she condemned fellow conservative politicians for seeking electoral arrangements with the anti-immigration party.

Among other posts she served from 2000 to 2007 as president of the French Foundation for preserving the memory of the Shoah, or Holocaust.

In the early 1990s she was a member of a delegation which investigated detention camps during the war in the former Yugoslavia.

In 2010, Veil joined the Academie Francaise, the elite intellectual guardians of the French language, becoming only the sixth woman to join the "immortals", as the 40 members of the academy are known.

Each "immortal" is given a ceremonial sword. Veil's was engraved with the three things that had imprinted her life.

They were the mottoes of the French Republic and the European Union — and the number 78651, which was tattooed on her arm at Auschwitz.