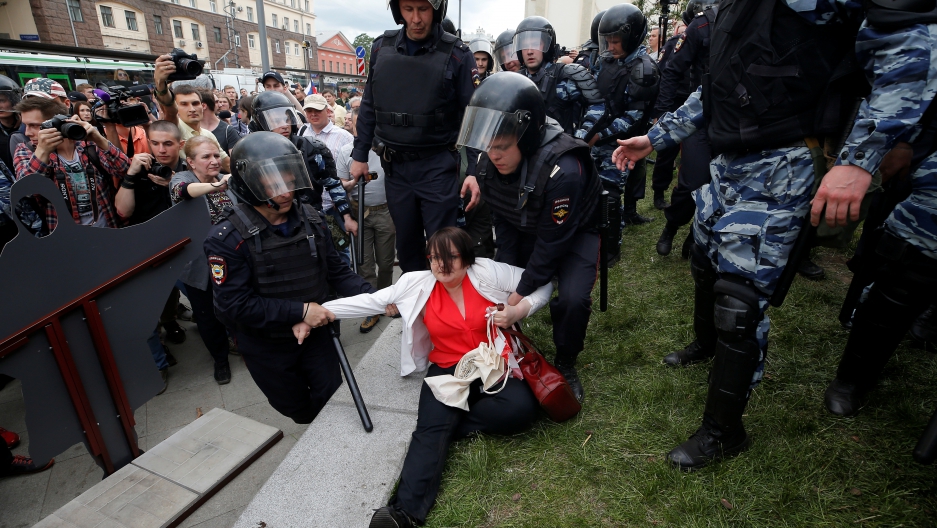 Yulia Galiamina, a well-respected Russian opposition leader, has been recovering from a concussion at the neurosurgical department of Botkin Hospital, where an ambulance brought her after an opposition rally earlier this month.

A Moscow policeman with the OMON special unit had smashed Galiamina’s face, breaking her teeth and damaging her jaw. But the accident did not break her will and her stamina: Even in a hospital bed with a hellish headache, she continued to organize a new anti-government rally.

“We have no other option left. Of course I will take part in the protest movement against violations of our citizens’ rights,” she said.

Russian women have always played a big role in Russian opposition movements. Authorities have treated women just as brutally as men, both in the USSR and in modern Russia.

Women leaders are not common in Russia's top governmental positions: Women make up fewer than 15 percent of officials in regional authorities and in some parts of Russian women are almost entirely missing from government. Galiamina, a 44-year-old university professor, has a firm belief that she and her followers, a post-Perestroika generation of democrats, could turn Russia into a reformed, free and transparent state.

“In the recent years we have seen the most courageous women fighting against injustice and defending human rights in Russia,” Alexander Cherkasov, the head of Russian Memorial Human Rights Center said in a recent interview.

Opposition groups have taken to the streets in the run-up to next year's elections, often chanting that President Vladimir Putin "is a thief."

The Kremlin’s leaders are right to be scared of unstoppable people like Galiamina.

Back in 2011 and 2012, hundreds of thousands of people protested against Putin’s return to the Kremlin for another term. Many were arrested, including some who are still on trial. And yet, a new movement of Putin’s critics is rising. They're ready to risk their freedom, and their health. Galiamina, a professor at the prestigious National Research University Higher School of Economics is one of them. She joined the anti-Kremlin protests on June 12 together with husband and her 16- and 19-year-old children. Students and teens also protested.

On the day that sent Galiamina to the hospital, tens of thousands of Russians participated in anti-Kremlin rallies in 185 cities, all across the country, from Moscow to Siberia and the Far East. These angry protests against large-scale state corruption were initiated by a popular opposition politician Alexei Navalny on the Day of Russia, a national holiday that was meant to celebrate Russia’s independence from the collapsed Soviet Union in 1991. It is the nation’s divorce from the totalitarian, repressive system. Instead of happy memories, the photographs on front pages of independent media outlets depicted police clubbing people on the ground, dragging off detainees, twisting arms.

The policeman who beat Galiamina did not help her to get up. Almost as soon as she got to her feet, four officers carried her to a police bus. The bus was full of detainees, mostly the age of her children, Galiamina said. In an interview, Tanya Lokshina, the Russia program director for Human Rights Watch, said the attack on Galiamina “was outrageously violent.”

“The Kremlin has no other response to public criticism but clubs and arrests — this is a sign of the government’s failure,” Cherkasov pointed out in a recent interview.

Russia’s Vladimir Putin, who enjoys support among up to 85 percent of the public according to polls, did not seem to take his opposition seriously. In a four-hour, televised call-in show, Putin said he was ready to face and talk only with those in the opposition who could suggest solutions to the issues. Galiamina says she has plenty of suggestions. And she has experience — she ran unsuccessfully for the Moscow City Duma in 2016 and has run for the State Duma as well.

This year, she has led major protests against a new law allowing the state to demolish Soviet-era apartment buildings.

“Factories closed leaving millions without jobs — but at least people had their apartments, their property,” Galiamina said. “The new law allows the state to deprive thousands of Moscow families of their beloved apartments and move them to wherever officials want.”

Earlier this month, Galiamina and her supporters invited representatives of the Duma, presidential administration and Moscow city hall to a roundtable with representatives of civil society groups. “Only a couple low-level officials showed up — unfortunately, the government does not want to recognize the grassroots democracy.”

Half-sitting in her bed, Galiamina shook her head and said in a weak voice that she would join the next anti-Putin rally, in spite of her injury.

What made her feel optimistic was that the nature of the protest has changed: “Six years ago, our activists were full of hopes for Dmitry Medvedev and his innovative projects to succeed,” Galiamina said. “Now we see many former Putin supporters joining the rallies, people who dreamed of stability but now lose the last thing they have, their property. These people are becoming responsible citizens.”