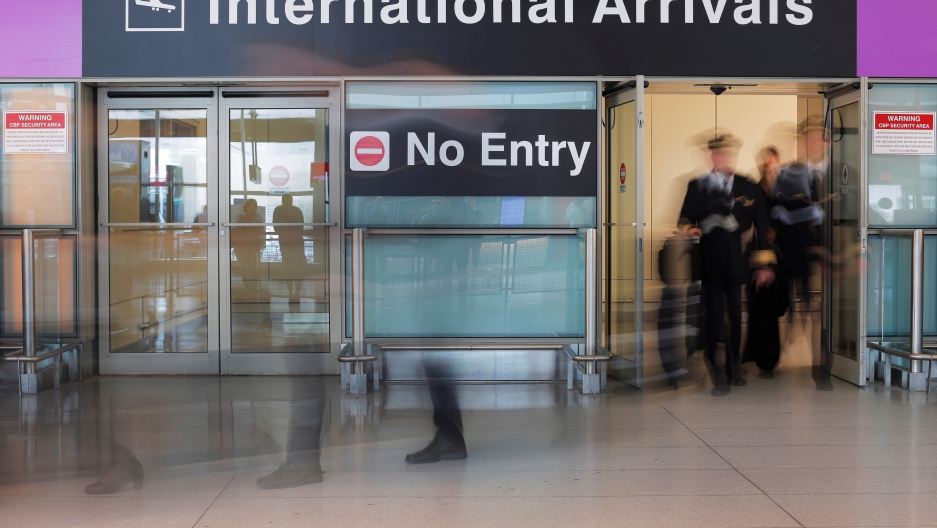 President Donald Trump's plan to ban people from six mostly Muslim countries from coming to the US will come into force late Thursday, as controversy swirls over who qualifies for an exemption.

The ban goes into effect at 8 p.m. ET Thursday after being delayed by five months of legal challenges before the Supreme Court gave Trump a partial victory. The ban puts tight restrictions on the issuance of visas to travelers from Iran, Libya, Somalia, Sudan, Syria and Yemen.

Officials stressed that anyone with a valid visa issued before that time would still be admitted, promising to avoid the airport chaos that accompanied the original announcement in January.

All authorized refugees booked to travel to the US before July 6 will also be admitted.

"We expect business as usual at the ports of entry starting at 8 p.m. tonight," said a senior administration official. "Our people are well prepared for this."

Nevertheless immigration activists and lawyers said they would be at airports to support any arrivals unfairly denied entry.

"The world is watching the United States of America, and what they are saying is, we thought that it was the country for opportunity and justice for all, but it does not seem that way," said Murad Awawdeh of the New York Immigration Coalition, speaking at New York's John F. Kennedy International Airport.

The American Immigration Lawyers Association (AILA) will also be deploying lawyers at airports throughout the country.

"We'll just be there to monitor and make sure that no one is having issues at the airport, and that no one gets put back on a plane and deported who should not be," said Kerry Doyle, a member of the New England chapter of AILA.

But questions remained over the Supreme Court's decision Monday to allow exemptions for anyone having a "bona fide relationship" in the US.

According to guidelines issued in a State Department cable to embassies, that exemption will include people with "close family relationships" in the United States, defined to include parents, spouses, children, sons- and daughters-in-law, siblings, and step­- and half­-siblings.

But "close family" does not include grandparents, grandchildren, aunts, uncles, nieces, nephews, cousins, brothers-in-law’s and sisters-in-law, fiancés and any other "extended" family members, the guidelines say.

People with formal relationships with a US entity, a job offer, for example, or who have accepted an invitation to study or lecture at a university, will also qualify for visas. But a hotel reservation, even if already paid, does not qualify.

The order stresses that non­profit groups cannot establish relationships with hopeful travelers or refugees just to allow them to skirt the ban.

"I think the refugee question is really one of the biggest questions left open. ... They don't really address a lot of the refugee issues," Doyle said. “General refugees, I think, are really in trouble."

Trump first issued the ban in January, following up on campaign promises to secure US borders against the threat of terrorism.

It set a 90-day halt on travelers from the six countries, plus Iraq, while the government reviewed and toughened its vetting procedures. It also set a 120­-day ban on all refugee entries.

But implementation was immediately frozen in federal courts based on complaints that the president had over-extended his executive power and violated the Constitution by focusing his order on Muslims.

The revised ban, ­­which notably removed Iraq, was also blocked in March, forcing the administration to appeal to the Supreme Court.

This week, the top court agreed to hear the case in October, and in the meantime partly lifted the lower courts' stays.

Lawyers and advocates say the decision could result in a flood of legal challenges.

Lawyers at the ready

They don't account for the amount of contact someone has with a relative, for example, someone raised by a family member not their parent.

"If you had frequent contact with your aunt, that should be indicative of a close family relationship. ... The cable does not seem to take that into account."

Rama Issa, executive director of the Arab American Association of New York, said the government is redefining what a family is.

"I was raised by my grandparents so the idea of grandparents not being part of a family is very foreign to me," he said. "I'm engaged to get married. I have family who lives in Syria today — not only my father, but my aunts and uncles who I would love to be at this wedding, and unfortunately are not going to be able to be here.”