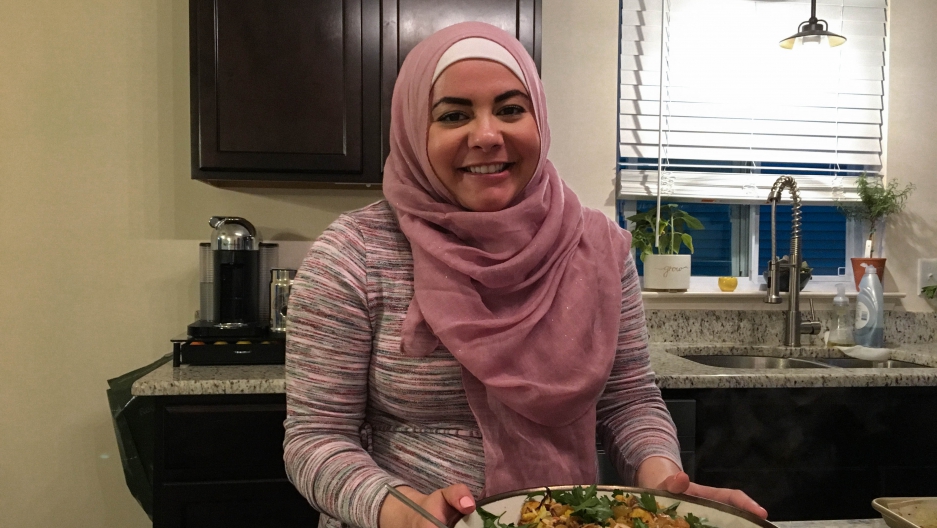 Amanda Saab came up with the idea for "Dinner With Your Muslim Neighbor." She and her husband, Hussein Saab, invite strangers to their home and cook them dinner. The idea is to bring Muslims and non-Muslims together over food.

Growing up, Amanda Saab loved watching cooking shows on TV. "Iron Chef" was a favorite. So was "Emeril Live."

In those days, Saab says, recipes on the internet weren't as readily available. So, she would sit in front of the TV, pen and a notebook in hand.

"I would write down everything and then try and make the recipes myself," she says, "and I’d miss something or something would be off, but then I’d figure it out because it was trial and error."

Amanda was born in Michigan to Lebanese-American parents. She’s always been a cook at heart. Her family’s meals have always been a mix of two worlds — traditional American (think burgers and fries, pizzas and pastas) and Lebanese food, which Saab considers the ultimate comfort food.

For her 16th birthday, Saab didn't ask her parents for a car. She wanted a KitchenAid mixer. She got one. Top of the line. "It was amazing," she recalls. "It was like 'OK, now we're stepping up the bar and the expectations for my baking are going to be a lot higher.'"

She kept up with the cooking shows. She took notes and experimented with new recipes.

Until one night, two years ago, she and her husband were watching, what else, "MasterChef."

"[My husband] suggested that I audition. I was like 'Huh. OK.' I mean I hadn't really thought about something like that before, but why not? Sure.'"

Saab's audition was successful and she competed on Season 6 of Fox’s “MasterChef” in 2015. She became the first Muslim chef in hijab on an American primetime cooking show.

In the end, she didn't win. But she says she didn't mind. For her, it wasn’t about winning — more about being there.

"There were a lot of people really excited and supportive," she says about reactions to her presence on the show. "They just felt like they got a boost of confidence by seeing someone who looks like them doing something they loved."

These days, Saab works for a nonprofit near Detroit. In the evenings, she unleashes her inner foodie.

On a recent evening at home, she prepares iftar, the meal Muslims eat at sunset to break their fast during Ramadan. Potatoes turn golden in a pan. The kitchen smells of jasmine rice and spices. 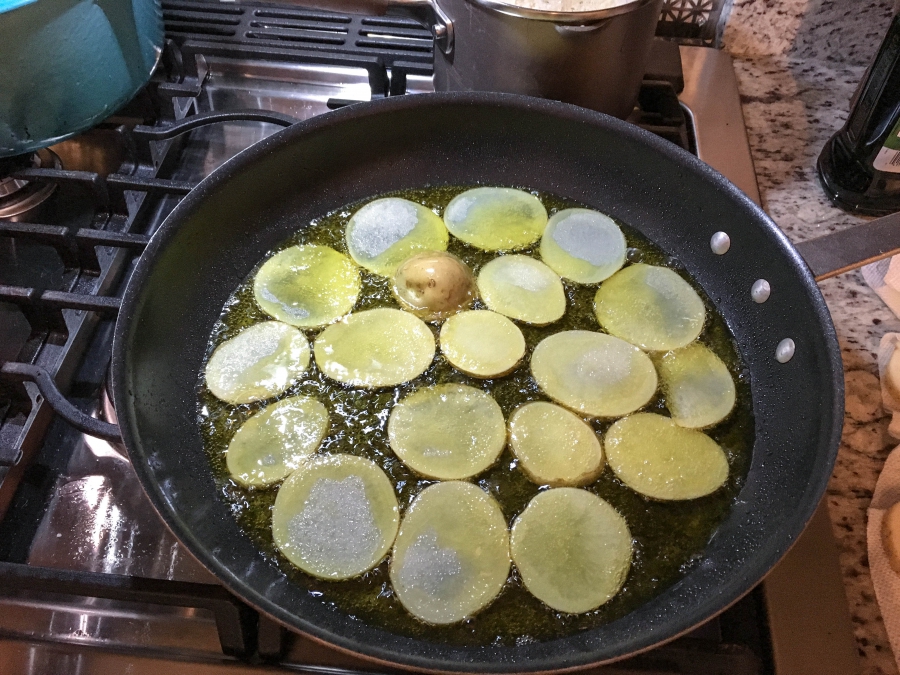 Potatoes fry in a pan at Amanda Saab's kitchen.

Saab says a lot has changed since she was on "MasterChef." The US has a new president who isn’t exactly bringing Muslims and non-Muslims together. His comments, she says, have sparked a wave of anti-Muslim sentiments.

Related: The new travel ban about to go into effect 'is redefining what a family is'

She remembers a recent incident that hit home. It happened while she was shopping.

"I was in line and there were some tabloids and I was just reading the headlines and one stood out," she recalls. "I was like 'Oh my goodness. It was like 'ISIS is in your backyard.' So terrible."

Then, a man, dressed head to toe in camo came up behind her.

Saab didn't feel safe enough to respond. She was hurt. But carried on.

But, she says, at that moment she realized she had to do something.

"I just felt I needed to combat it in a way that I knew how — and that was through food."

After all, Saab says, it's easy to fear someone you don't know. "If you can put a face on ... like 'Oh, I know a Muslim: Amanda ... down the street ... they're not really all those bad things.' Then you're not going to think 'Oh I can just generalize a whole religion of 1.6 billion people.'"

So, she had an idea. 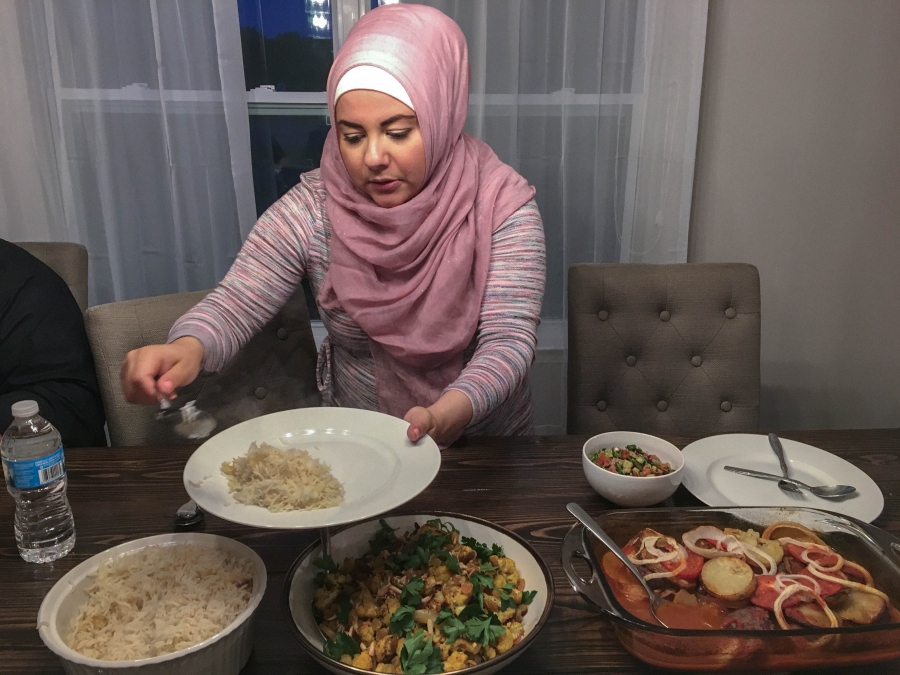 On the menu tonight: Lebanese-style meatballs, rice and cauliflower.

“I turned to my husband and said let's invite some people over for dinner ... you know, strangers that we've never met — that might have never met a Muslim before and allow them to the opportunity to get to know the real Islam.”

Dinner With Your Muslim Neighbor was born.

Every month, Saab and her husband post a message on Facebook and Twitter, inviting strangers to come over for dinner. They go through the responses and come up with a list of about 10 guests.

Then, they come up with a menu and get cooking.

Over dinner, the guests ask questions about Islam.

Why do Muslims believe in one God? Does Islam have sects like Christianity does? Is she forced to wear the hijab?

Saab and her husband answer as best as they can. They’re not academics. They just talk about their faith as they understand it.

Saab says the dinners have been a learning experience for her too.

She recalls the story of one of their guests, an African American man named Calvin. He grew up in a military family and married a Caucasian woman.

"Hearing about their struggles as a mixed-race couple," Saab explains, "I loved hearing their perspective and their stories and them feeling comfortable enough to share with us some of their vulnerabilities."

Saab and her husband have hosted 15 dinners so far. Saab is working on creating a guide to post online so that other people — she hopes other Muslims in America — can throw their own dinners.

But can a simple dinner change the opinion of those men Amanda overheard at the grocery store? She says it doesn't hurt trying.

“At the end of the dinners, we often hear 'We're just like you and you're just like us,'" she says. "And I'm like: exactly! And it just took a simple meal for us to realize that.”