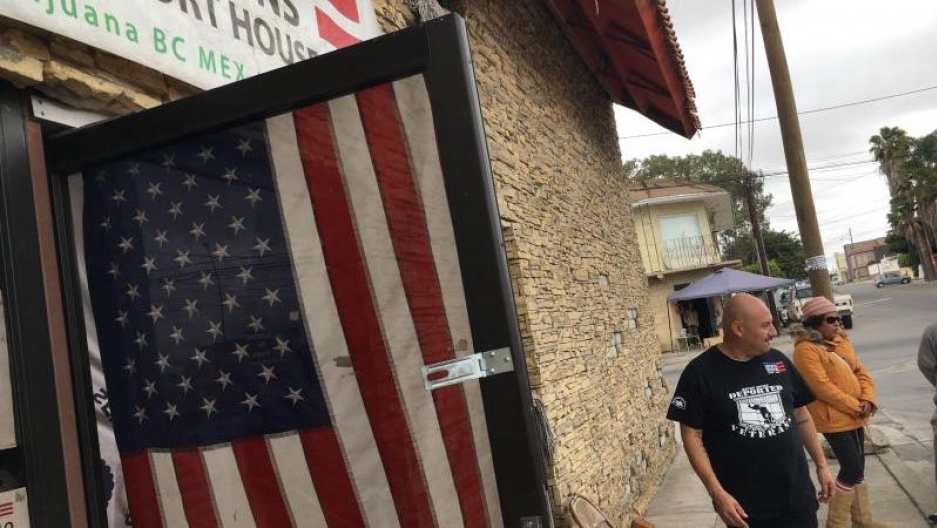 Army veteran Hector Barajas stands outside the Deported Veterans House in Tijuana. The House has a database of 350 deported veterans, but Barajas estimates the numbers could be much higher.
Credit: Dorian Merina/American Homefront
Share

Signs of American military life are everywhere in the cramped Tijuana apartment: a US flag hangs on the wall, Army patches cover a camouflaged backpack and photos of uniformed men line a shelf.

"It was very difficult to transition, the first couple months," said Hector Barajas, a former US Army paratrooper, who was deported to Mexico in 2010 and calls the apartment home.

Related: Serving in the US military won't protect these veterans from being deported

He said when he first landed back in Mexico — a country he had little connection to since he left as a child in the 1980s ­— there was no network of veterans and no offices to help get him on his feet. He started reaching out to other veterans and soon turned his home into a shelter for deported veterans in Tijuana, many of whom needed help with even the most basic things as they adjusted to an unfamiliar city.

"That's part of our job here: to make it easier for the men to find work, helping them find their IDs, where to go get their driver's license," said Barajas. "It's difficult when you don't really have anyone to help you out with that." 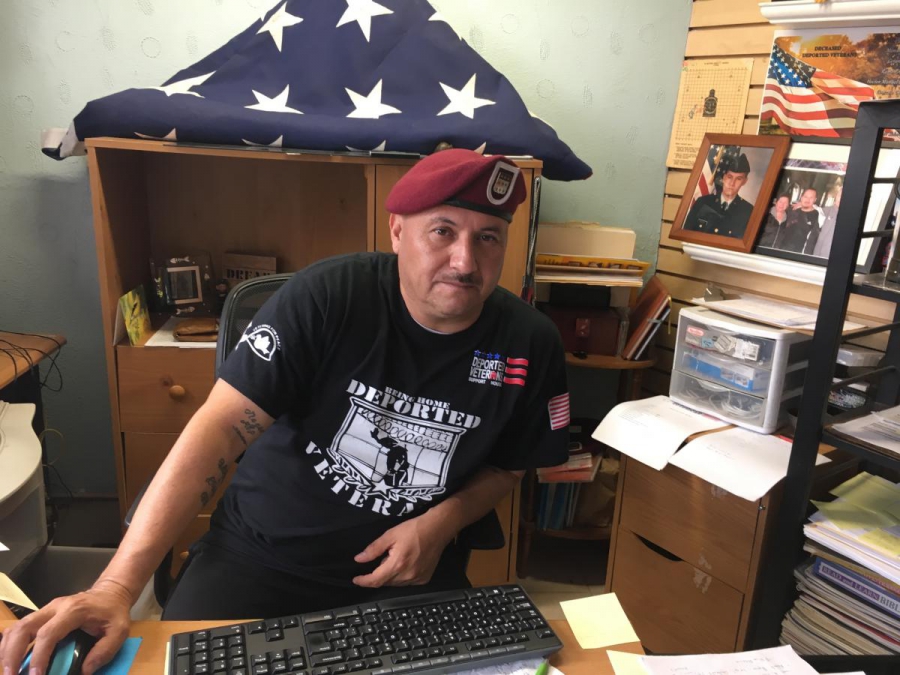 Hector Barajas was pardoned by California Governor Jerry Brown in March this year, opening up the possibility of his return to family in Los Angeles.
Credit: Dorian Merina/American Homefront

He said he's been in touch with nearly 60 deported veterans since October. His office keeps a database of about 350 veterans who have been deported to different cities in Mexico and countries further away, such as the Philippines, Honduras and Iraq. The two-story apartment in a residential part of eastern Tijuana has three cots upstairs and a tiny kitchen Barajas refers to as a "chow hall." Together, the vets call this place "the bunker."

'I am taking responsibility'

Barajas served two stints in the Army, including in the 82nd Airborne. But when he got out, he ran into trouble with the law. In 2002, he was sentenced to three years in prison for discharging a firearm from a vehicle. After prison, he was deported, but then re-entered the US illegally and was deported again in 2010, according to records from Immigration and Customs Enforcement.

Barajas, now 40, said he regrets his actions but doesn't like to dwell on the past.

"I paid dearly for it, and I am taking responsibility for putting myself in that position," he said. "As far as being a productive member of society, let's move forward."

In March, California Gov. Jerry Brown pardoned Barajas and two other veterans, noting their honorable service in the military. That pardon clears a major obstacle but doesn't guarantee their return.

Barajas is hoping to get his legal status back and reunite with his family in Southern California, including his 11-year-old daughter. For now, he spends his time helping other deported veterans ­— many of whom, he said, struggle after getting out of the military.

"Not too many people are willing to put on a uniform and go fight, and it's the reason we have these freedoms today is because of these men and women," he said. "When they came back, they came with trauma. We have PTSD. It's military, it's connected to their service. The reasons these men are going to make these mistakes and suffer is because of the military trauma."

'I needed help, but I didn't know how to ask for it'

There are more than 11,000 noncitizens serving active duty in the military, according to the Pentagon. About a decade ago, that number was three times as high. Legal permanent residents are eligible to serve, and doing so can expedite the naturalization process. But citizenship is not automatic and many veterans leave the military without obtaining it.

Some described a confusing and time-consuming process, made harder by deployments and frequent moves. Others said that because they had grown up mostly in the US, they felt American and didn't think to apply, especially while focused on the demands of military service.

But without citizenship, they're vulnerable to deportation if they are charged or convicted of a crime later in life. An executive order signed by President Donald Trump in January lowers the bar for who can be deported to include those charged with a criminal offense, even though they may not yet be convicted.

But it's been long-standing federal law, outlined in a 1996 measure signed by President Bill Clinton, that has made legal permanent residents eligible for deportation if they have a criminal record, even for a nonviolent offense.

That's what led to Jesus Juarez's deportation, after conviction of drug possession in 1997. The former Marine was brought to the US as a child from Mexico, and he enlisted as a teenager. But a training accident while he was deployed to Puerto Rico in the 1970s led to a series of painful surgeries and memory loss. Then his father suddenly died, sending him into a downward spiral. 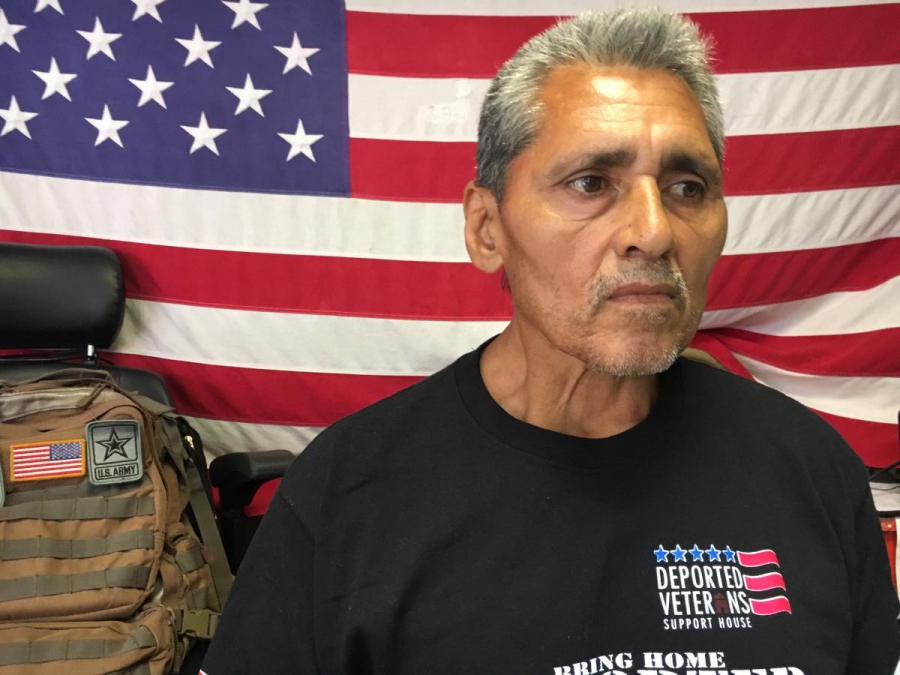 Jesus Juarez, 61, a Marine veteran, was deported after a drug possession conviction in San Diego in 1997. He said a doctor in Tijuana told him he needed prosthetics for an injury sustained during military training, but he's still trying to access health benefits.
Credit: Dorian Merina/American Homefront

"I was young and there were a lot of things I didn't understand and I needed help," said Juarez. "I needed help, but I didn't know how to ask for it."

He said his behavior contributed to him leaving the military with an other than honorable discharge and getting into drugs.

But in the years since, he's cleaned up and reconnected with his family in San Diego. He hopes to one day return to the US.

"If we were willing to give our lives for the country, I think we should be able to live there," he said.

Juarez, now 61, said a doctor in Tijuana has told him he needs prosthetics, but he can't afford them. There are no VA doctors in Tijuana, so he and the other veterans have trouble accessing their health benefits or applying for eligibility.

"Generally, residence overseas does not bar a veteran from applying for or receiving VA disability compensation or other benefits, nor would the fact of deportation or, in general, conviction of a crime, be a bar to these benefits," said Terrence Hayes, a spokesperson at the VA.

But Hayes said that there are no VA facilities in Mexico and added that "there may be some practical difficulties in pursuing a claim from a foreign country."

For veterans who are barred from re-entering the US to visit a VA facility or be seen by VA doctors or staff, the situation amounts to a critical impasse.

Reforms could be coming

Some deported veterans could get help from legislation in California that would set up a legal aid fund for them. The measure, AB 386, sponsored by Assemblywoman Lorena Gonzalez Fletcher (D-San Diego), passed the Assembly in May and is pending in the Senate. But it would cover only veterans with an honorable discharge, leaving out those like Jesus Juarez.

Meanwhile, in Congress, Democrat Joaquin Castro of Texas said he plans to introduce a bill this term to help service members get their citizenship — and prevent deportations for veterans who run afoul of the law.

"If there is punishment to be had for a crime that was committed, that punishment should be meted out in a US jail or a US prison, but that person should be in the United States," said Castro.

Castro's bill would add to several others currently in Congress that aim to address the issue in different ways, such as requiring the federal government to keep track of how many veterans face deportation or temporarily allow deported veterans re-entry into the US to seek medical treatment.

But efforts at the federal level face an uphill road through Congress.

Meanwhile, back in Tijuana, Hector Barajas sleeps on a cot next to a daily reminder of the harsh timeline that many deported veterans face: six military dog tags hang on the wall. They're the identification tags of some of the veterans who passed through the shelter and died while still blocked from returning to the US.

"Bring these men and women home, who at one point put their life on the line, who at the end of the day when they die, are going to be buried as American veterans," said Barajas. "Why not bring these men home?"

This story was produced by The American Homefront Project, a public media collaboration that reports on American military life and veterans. Funding comes from the Corporation for Public Broadcasting and the Bob Woodruff Foundation.