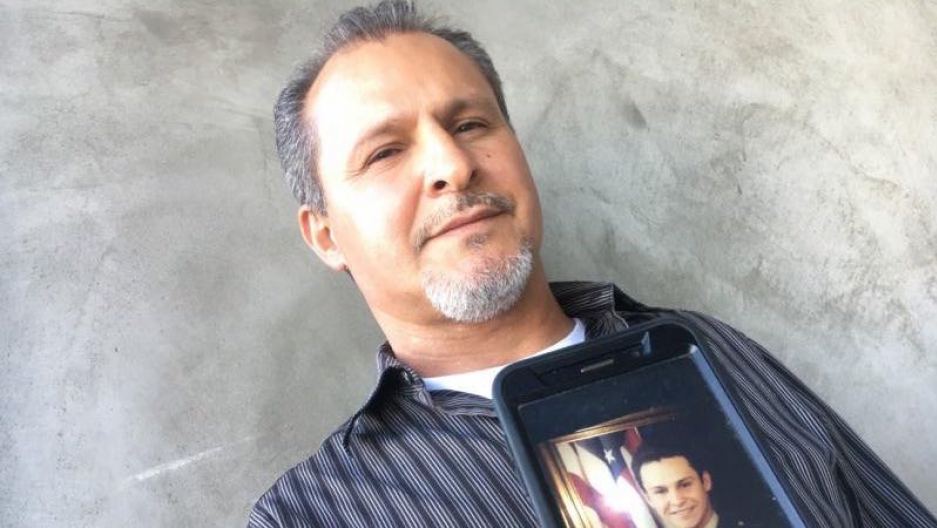 Mario Martinez, 54, an Army veteran, is facing deportation after serving four years in California state prison. While serving in the Army in the 1980s, he was deployed to Germany as part of US forces sent to guard the Berlin Wall.

Now, he's fighting for the right to keep living here.

Martinez, 54, was born in Mexico, but came to the US as a young child and became a legal resident. He joined the Army, served with the 82nd Airborne Division, and earned an honorable discharge. But more than a decade after he left the service, he was convicted of a felony, putting his immigration status in jeopardy.

"One mistake shouldn't make the rest of your life," said Martinez, who spent four years in California state prison for an assault conviction stemming from a 2008 domestic violence case. "I mean I paid for what I did, I did my time. I did it quietly, went in and got out."

After Martinez served his time, he was handed over to Immigration and Customs Enforcement, the agency that handles deportation for the Department of Homeland Security. He spent another 10 months in detention, then was released on bond in 2014. He currently lives in Southern California, while he awaits a court date in his deportation case.

Recently, he bought a house after rebuilding his credit and moved in with his 24-year-old son. He's also reconnected with his granddaughter, who was too young to remember him when he was still incarcerated. He said he regrets his actions. But these days, he thinks about everything he could lose all over again.

"Isn't that punishment enough?" he asked.

Mario Martinez's parents brought him to Southern California from Mexico when he was 4 years old. He attended schools in the area, joined ROTC and made plans for a military career. He became a green card holder and, as a permanent legal resident, was eligible to enlist. But he said he always felt American. 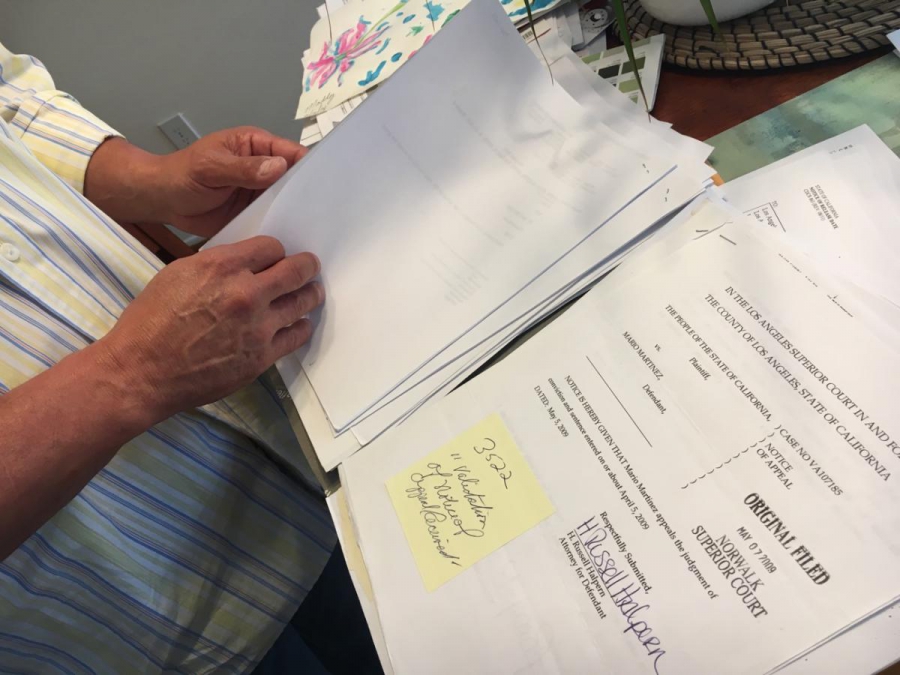 Army veteran Mario Martinez looks through papers from his criminal case in the dining room of his home in Southeast Los Angeles. Currently without a lawyer, he's trying to fight a deportation order.

"I would have been willing to die for this country, the only place I call home," he said.

In the 1980s, he was deployed to Germany as part of the 3rd Armored Division to guard the Berlin wall. He worked as an engineer on tanks and equipment and maintained the power generators for soldiers. It was a heady time, he said, and he saw himself as part of a force protecting America’s security abroad. His military papers show an honorable discharge and recognition for skills during training.

But more than a decade after he left the Army, he was convicted of assault in a domestic violence case. It happened the night he found the body of his best friend, who had died by suicide. Martinez said he was upset and got into an argument with his girlfriend. At the trial, his girlfriend testified that it was a one-time event, but cuts to her cheek required stitches, according to court records.

He served four years in prison.

"I'm not a hardened criminal, nor was I when I was in the prison system," said Martinez, who said he apologized to his girlfriend and tried to keep a low profile while locked up. "I stayed away from trouble. I never wanted trouble. I don't have a criminal record other than this."

Martinez's case is part of a troubling pattern, said Jennie Pasquarella, an attorney with the ACLU of Southern California.

"The fact that that person gave willingly their life to defend this country should be an extraordinary factor that the government considers when seeking a punishment as severe as deportation and, in many cases, permanent separation from their families," she said.

Pasquarella looked at more than 80 cases of veterans who either were deported or facing deportation. Her report last year, called Discharged, then Discarded found that many veterans thought they automatically became citizens through their service. Others applied for naturalization only to have their paperwork lost.

"In fact, we had multiple people say that they didn't know they weren't a US citizen until literally they were being put on that plane to be deported or they were facing that immigration judge," said Pasquarella.

Immigration and Customs Enforcement, or ICE, does take military service into account in deportation cases, according to Sarah Rodriguez, an agency spokeswoman. She said official policy is to have senior leadership at the local field office sign off before deporting a veteran.

"ICE exercises prosecutorial discretion for members of the armed forces who have honorably served our country on a case-by-case basis when appropriate," said Rodriguez. "Still, applicable law requires ICE to mandatorily detain and process for removal individuals who have been convicted of aggravated felonies as defined under the Immigration and Nationality Act."

Rodriguez added that ICE does not track how many deportees have a military background and could not provide a number for how many veterans have been deported in recent years. Last year, the federal government deported 450,954 people, according to ICE and Customs and Border Protection data.

The Department of Veterans Affairs also said it does not keep track of how many veterans have been deported.

An executive order signed by President Donald Trump on Jan. 25 expands who can be deported to include not only those with criminal records, but noncitizens who have committed a "chargeable criminal offense." Already immigrant arrests are up by a third, compared to last year, according to ICE data.

But the current enforcement policy on immigration has been shaped over decades by both Democratic and Republican presidents.

Many veterans and advocates point to a 1996 law, passed during the Clinton presidency, as laying the groundwork for current deportations. That law, called The Illegal Immigration Reform and Immigrant Responsibility Act, expanded the types of criminal convictions eligible for deportation. In the following decade, the U.S. deported 897,099 non-citizens after they served their criminal sentences, according to a 2007 report from Human Rights Watch, which based its findings on ICE data. During those years, 77 percent of the legal permanent residents were deported for non-violent offenses.

'I empathize with the victim'

But not everyone agrees that veterans should be protected from deportation in all cases.

"Even under the Obama Administration, three misdemeanors and you were able to be deported," said Donny Youngblood, sheriff in Kern County, California and president of the California State Sheriffs' Association.

As a Vietnam-era veteran, he said he sympathizes with other veterans who are struggling with civilian life, but he said those who repeatedly break the law should be deported. Plus, he said, even with crimes that are considered less serious, victims often pay a steep price that should not be overlooked.

"I have mixed emotions because I am a veteran, but I certainly empathize with the victim more than anyone," said Youngblood.

Youngblood does, however, propose a solution: grant citizenship to immigrants who serve in the military. That way, if they run into problems with the law later, they still get the protections of a citizen.

The Pentagon said it's taking steps in that direction by making it easier for troops to get naturalized. The military now offers naturalization services during basic training, an effort that started in 2009 and extended to all branches in 2013. Though the policy is not permanent, the Pentagon credits it with helping decrease the number of non-citizens in the military from about 35,000 in 2005 to just over 11,000 today.

There are also legislative efforts underway, such as a package of bills introduced in May by Democratic Congressman Juan Vargas of San Diego that would require each branch of the military to establish a naturalization office at basic training sites. Another bill would require DHS to track how many veterans are facing deportation.

While the changes come too late for vets like Mario Martinez, he said other veterans have earned the right to become citizens — and to gain some understanding from their fellow Americans.

"These people gave up a lot for your freedom," he said. "Obviously, some had criminal records, but they're still people and they served this country honorably to maintain the standard of life that you currently have."

This story was produced by The American Homefront Project, a public media collaboration that reports on American military life and veterans. Funding comes from the Corporation for Public Broadcasting and the Bob Woodruff Foundation.