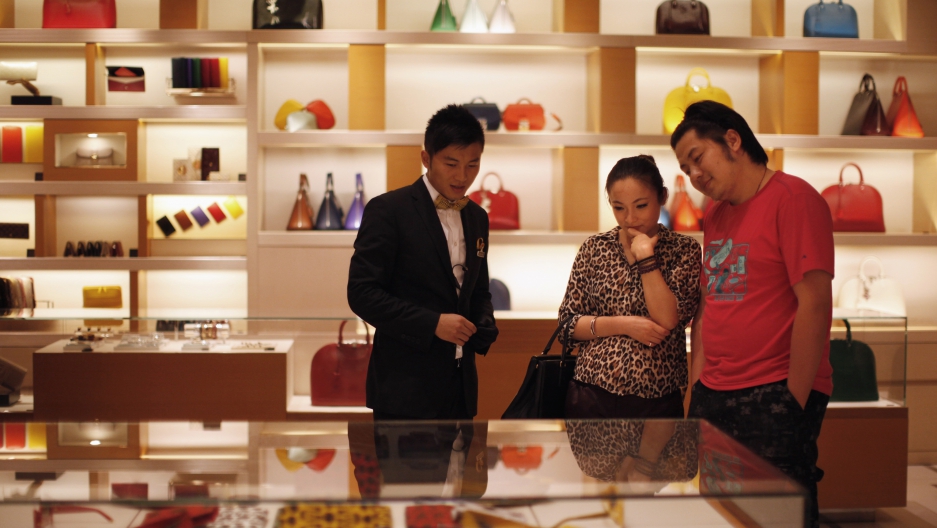 A couple shops at a Louis Vuitton store in China.

Growing up in Singapore, Kevin Kwan didn’t recognize that his family hobnobbed with the rich and powerful.

But when he was 11, he moved to the US. Within a few years, he realized that his childhood had been out of the ordinary.

For example, at a friend’s house in Singapore, Kwan saw a collection of vintage cars that included a Rolls Royce and a Lamborghini. In the middle of the living room was a pond that was home to a school of baby sharks.

“I grew up in an old establishment family in Singapore,” says Kwan. “Since then, I think I’ve been trying to make sense of the unusual upbringing I had.”

Though the book satirizes competing factions in Asia’s upper class, Kwan said that the books are based on real experiences. For example, the first installment, “Crazy Rich Asians,” begins when a wealthy Chinese family arrives at a glitzy hotel in London. After the receptionist refuses to give them a room, they decide to simply purchase the hotel.

“It’s meant to be very amusing and entertaining, hopefully, but so much of it is the truth,” says Kwan of the series.

Kwan began writing the series about five years ago, after realizing that the media wasn't covering the real people behind Asia’s remarkable economic success.

“I felt that this was a story that wasn’t being told,” Kwan says. “I really wanted to show the human side of this, the intimate side of this — the sort of ‘Downton Abbey in Asia' plotlines, of what it is like to be part of a family, or dynasty, that’s part of great wealth in Asia.”

The protagonists of “Crazy Rich Asians” include Nick Young, the heir to a massive fortune, and his American-born Chinese girlfriend, Rachel Chu.

“When he takes her back home to the island of Singapore, she doesn’t realize that she’s stepping on all these social land mines,” says Kwan.

Through the eyes of outsiders like Rachel, and insiders like Nick, the reader becomes acquainted with the extravagant tastes — and personal struggles — of the most prominent families in Singapore.

Though Kwan set out to satirize the rich, the writing process also helped him understand his own youth.

“These characters became very real to me. Their motivations, their fears, their desires — and their struggles,” he says. Kwan laughs, and adds: “Even the rich have struggles.”

Wealth and waste in Asia aren’t simply a laughing matter, of course — especially in an era of rising income inequality across the globe.

“Increasingly, people there are really noticing the wealth disparity,” he says, “and so a lot of the elite have really gone underground with their spending.”

But as Kwan’s novels suggest, there’s still plenty to poke fun at.

“I think there’s always a crowd that will try to flash their bling,” he says.