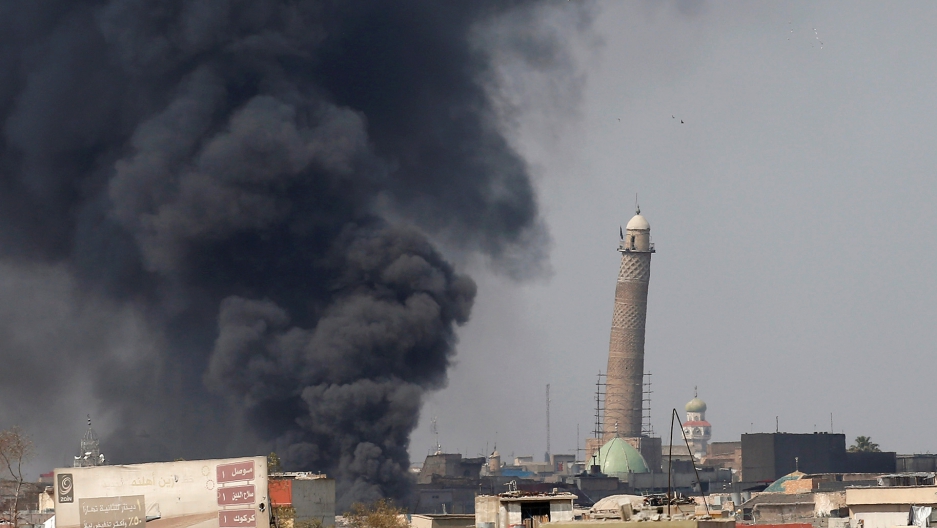 Smoke rises from clashes near Mosul's al-Habda minaret at the Grand Mosque, March 17, 2017. ISIS forces reportedly blew it up this week as Iraqi forces advanced on their position.

Mosul's trademark leaning minaret was missing from its skyline for the first time in centuries Thursday after desperate members of ISIS blew it up while Iraqi forces advanced on an ancient mosque compound.

Explosions on Wednesday evening leveled the Nuri mosque — where Abu Bakr al-Baghdadi gave his first sermon as leader of ISIS — and its ancient leaning minaret, known as the "Hadba" (Hunchback).

Officials from Iraq and the US-led coalition said the destruction of the site was a sign of the group's imminent loss of Mosul, with Prime Minister Haider al-Abadi calling it an "official declaration of defeat."

The loss of the unmistakable 12th-century minaret — one of the country's most recognizable monuments, sometimes referred to as Iraq's Tower of Pisa — left the country in shock. 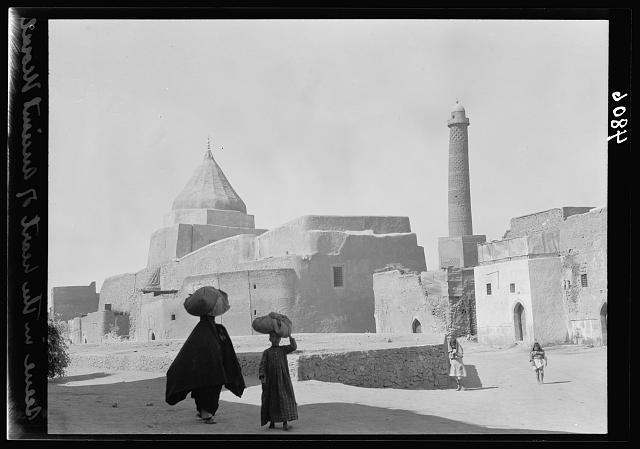 This is the heart of ancient Mosul, showing a Yezidi shrine to the left.

But the destruction had been widely anticipated, with commanders saying ISIS would not have allowed Iraqi forces to score a hugely symbolic victory by recapturing the site.

"They blew up this place in an attempt to cover up their heavy losses in the media, but the media and the people see the victories and see the collapse of" ISIS, Brigadier General Falah Fadel al-Obeidi, from the elite Counter-Terrorism Service, told AFP in Mosul.

ISIS claimed on its Amaq propaganda agency that the site was hit in a US strike, but the US-led coalition said it was ISIS who had "destroyed one of Mosul and Iraq's great treasures."

Brett McGurk, the US envoy to the coalition, said it was the "clearest sign yet of desperation and defeat" from ISIS.

In Iraq, while some mourned the loss of a piece of their cultural identity, others stressed that the destructions were dwarfed by the ongoing human suffering.

The head of the UN's cultural agency, Irina Bokova, said "this new destruction deepens the wounds of a society already affected by an unprecedented humanitarian tragedy."

This 1932 photo shows Mosul's "leaning tower" in more peaceful times. The minaret had stood over the ciy since 1172, becoming a widely known icon.

The destruction of the site in Mosul's Old City adds to a long list of priceless heritage and historical monuments destroyed by ISIS during its three-year rule over parts of Iraq and Syria.

The minaret, which was completed in 1172 and has been listing for centuries, is featured on Iraq's 10,000-dinar banknote and was the main symbol of Iraq's second city — giving its name to countless restaurants, companies and even sports clubs in Mosul.

After seizing Iraq's Sunni Arab heartland in June 2014, ISIS reportedly rigged the Hadba with explosives but was prevented from blowing it up by the local population.  The group considers the reverence of objects, including of such sites, as heresy.

The minaret used to be visible from many spots in the city, especially from the east bank, across the Tigris river that divides the city.

Iraqi forces had been approaching the Nuri mosque on Wednesday, after launching an assault on Sunday to retake the Old City, the last district of Mosul still under ISIS control.

About 100,000 residents are believed to still be trapped in the Old City by ISIS, which has been using civilians as human shields to defend its last redoubt in Mosul.

Mosul battle not over

The area still controlled by ISIS is small but its narrow streets and the presence of so many civilians has made the operation very perilous.

Two journalists were killed on Monday and two others wounded near the Old City and reports by medics and rights groups suggest that trapped civilians are paying a heavy price.

ISIS forces have been offering fierce resistance in the Old City, with barrages of mortar fire and a huge number of booby traps slowing the Iraqi advance.

While Iraqi forces have made good progress to reach the Nuri mosque, Iraqi commanders have warned that the battle for the Old City is far from over.

When asked about the explosions that forever changed the face of the city on Wednesday, one west Mosul resident said that human lives remained more important than any historical monument.

"Although it was Mosul's symbol and icon, there are people who have been killed. They are much more precious than the minaret," 38-year-old Yasser Ali told AFP.