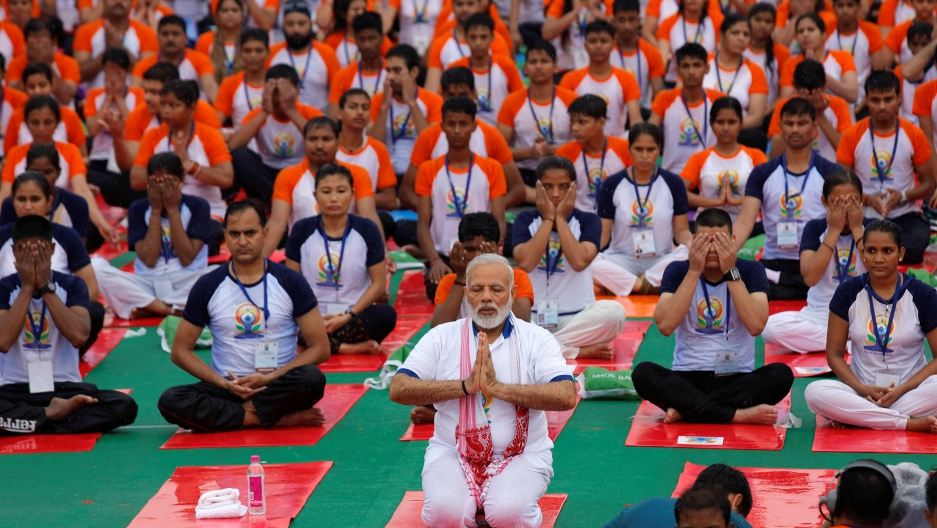 Yoga has connected the world with India, Prime Minister Narendra Modi said Wednesday, as he rolled out his mat along with millions of others across the globe to celebrate the ancient practice.

Enthusiasts across India rose at the crack of dawn, many braving monsoon showers, to mark the third International Yoga Day.

Celebrity yoga guru Baba Ramdev claimed to have set a new world record for the largest yoga session by gathering more than 300,000 practitioners at an open-air ground in the western city of Ahmedabad.

Officials from Guinness World Records were checking data from the event, but if confirmed, the numbers easily beat the previous record set two years ago in New Delhi with 36,000 participants.

This year, police in New Delhi closed roads to make room for a mass yoga session held amid tight security in the heart of the capital.

"When all of us, at the same time, do the same movements, it feels special. The energy is different," said 24-year-old Abhi Aggarwal as he waited with his parents for the session to start.

India's prime minister, a teetotal vegetarian who practises yoga daily, led some 50,000 people in an early-morning session in Lucknow, the capital of the northern state of Uttar Pradesh.

"Many countries which do not know our language, tradition, or culture are now connecting to India through yoga," Modi said in an address to the crowd.

"Yoga connects body, mind and soul. It is playing a big role in bringing the world together too," he said after performing various poses.

Modi, who credits his strict yoga regime for his ability to work long hours on little sleep, has been spearheading an initiative to reclaim the practice as an historic part of Indian culture since his Hindu nationalist government came to power in 2014.

He has set up a ministry dedicated to promoting yoga and other traditional practices and persuaded the United Nations to create a dedicated International Yoga Day, a move seen as a triumph of soft power.

Indian scholars believe yoga dates back 5,000 years, based on archaeological evidence of poses found inscribed on stones and references to Yogic teachings in the ancient Hindu scriptures of the Vedas.

On Wednesday the UN headquarters in New York lit up with images of poses, among the events being held across more than 100 countries to mark the third International Yoga Day.

But not everyone was enthusiastic — an influential hardline Islamist group in Bangladesh called for Muslims to boycott a yoga event organized by the Indian High Commission.

Hundreds of officers were deployed at the national stadium, where the three-hour event was held, after Hefazat-e-Islam said yoga was un-Islamic.

Across India, schoolchildren, soldiers, politicians and bureaucrats bent and twisted their bodies on colourful mats at mass outdoor sessions.

Television footage showed Indian soldiers performing yoga in their military overalls in the Himalayan region of Ladakh, at a height of 18,000 feet.

"If you buy a machine and don't operate it... after one year, the machine will not run. Your body is like that," the 66-year-old told AFP in Delhi. "Your joints and muscles will be stuck up."