John Feltner, a registered Democrat turned Trump supporter, is losing his manufacturing job to Mexico. He’d like the president to do more, but doesn’t blame him for now being out of work.

Last December, then-President-elect Donald Trump came to the Carrier factory in Indianapolis to deliver the big news: 1,100 jobs weren’t going to Mexico. Trump had used the bully pulpit and $7 million in state tax breaks to help accomplish this.

After hearing Trump, local union leader Chuck Jones spoke with a reporter from The Washington Post: “I told her that Trump lied his ass off, that it was a dog and pony show. And that I almost threw up in my mouth.”

Jones said Trump had exaggerated the numbers — only 730 jobs with Carrier, building heating and cooling units, were staying in Indiana — and Trump had left out some key details: Between two Indiana factories, 1,200 Carrier jobs were still headed for Mexico. And some of the jobs remaining in Indiana would ultimately be replaced by automation.

Chuck Jones, who is President of United Steelworkers 1999, has done a terrible job representing workers. No wonder companies flee country!

Jones, who recently retired, says he wasn’t bothered being singled out by the most powerful man on the planet.

“I’m not a soft person as it was, so what he said, I just thought was amusing. I didn’t feel like he was picking on me,” says Jones. “I just thought it was pretty chickens**t for the most part.”

So, that’s the backstory. The feud between the local union president and soon-to-be president of the United States quickly faded from the spotlight, but Jones hasn’t gone silent. He’s writing local op-eds saying Trump can do a lot more.

An interesting idea, but easier said than done. Military contracts are incredibly complex and take decades to complete. If a president threatened to unravel a defense contract to save unrelated manufacturing jobs in Indiana, it would also almost surely be stopped by the courts. (The White House did not respond to an email request to discuss this topic.)

Jones acknowledges that a president, any president, can only do so much. It would take Congress, new policies and years of work to make manufacturing in Indiana great again, to borrow a phrase. And robots are replacing a lot more American workers than Mexicans are.

Knowing all of this, Jones doesn’t hold manufacturing workers who voted for Trump in the highest regard: “They drank his Kool-Aid. I think at that point in time they were stupid. Some of the people I talk to now tell me, ‘Well you need to give him a chance.’ If that’s what they’re saying now, they’re not stupid, they’re ignorant.”

“What was our other option? Hillary?” asks John Feltner, a registered Democrat turned Trump supporter who lives just outside of Indianapolis.

Feltner recently got laid off from Rexnord, making ball bearings, where he was earning $25 an hour, plus overtime, enough to put a couple of kids in college. Feltner knows his new reality: Finding a job with comparable wages to support his family is going to be tough.

“I just want to make a living and keep what I’ve got here going. That’s all I ask for,” says Feltner.

His job, and 299 others from Rexnord, in Indiana, are heading for Monterrey, Mexico.

Trump has tweeted out about Rexnord, as well, but the company doesn’t seem to be listening.

Rexnord of Indiana is moving to Mexico and rather viciously firing all of its 300 workers. This is happening all over our country. No more!

“I think he [Trump] could do more,” says Feltner, in terms of stopping manufacturing work from shifting to other countries. “But, on the other hand, this has been an ongoing process, this hasn’t just been President Trump, this has been all of our elected officials that have allowed this to happen."

Feltner says he doesn’t like how Trump exaggerated what he had accomplished in Indiana, and Feltner is lukewarm on President Trump’s performance so far. But Feltner still believes in the message.

"What he said struck a nerve with me. I thought, 'Hell yeah, it’s about time,'" says Feltner. "Who couldn’t believe, if you’re an American, as putting Americans first? I mean, we’re the greatest country on Earth, why not?"

Feltner and Jones might not see eye to eye on President Trump, but they both say they’re friends and union brothers. And for both men, the goal is the same: preserving middle class, blue-collar jobs. Both men also agree: They don’t want their kids to follow them into manufacturing. 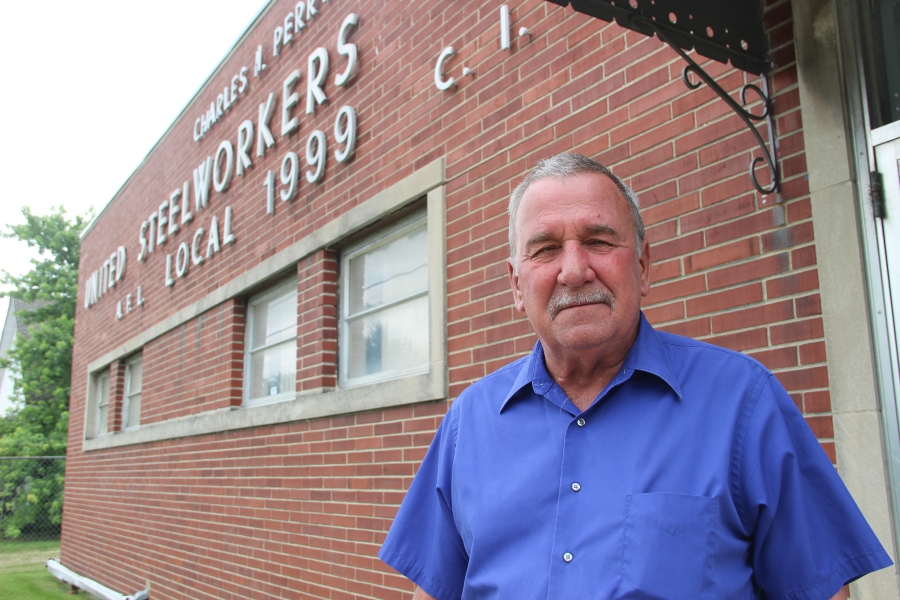 “If I could give any message to anybody, it would be, kids in school. They have to get a college degree in order to have any chance of moving forward,” says Jones.

Jones’ message can be a tad confusing. On the one hand, he says he knows that machines and foreign labor are winning the battle against American manufacturing workers, and he doesn’t want his kids and grandkids to build careers in a factory. On the other hand, he’s doggedly working to preserve Indiana’s manufacturing industry.

Jones sums it up this way: “We’re fighting to keep what little we’ve got left.”