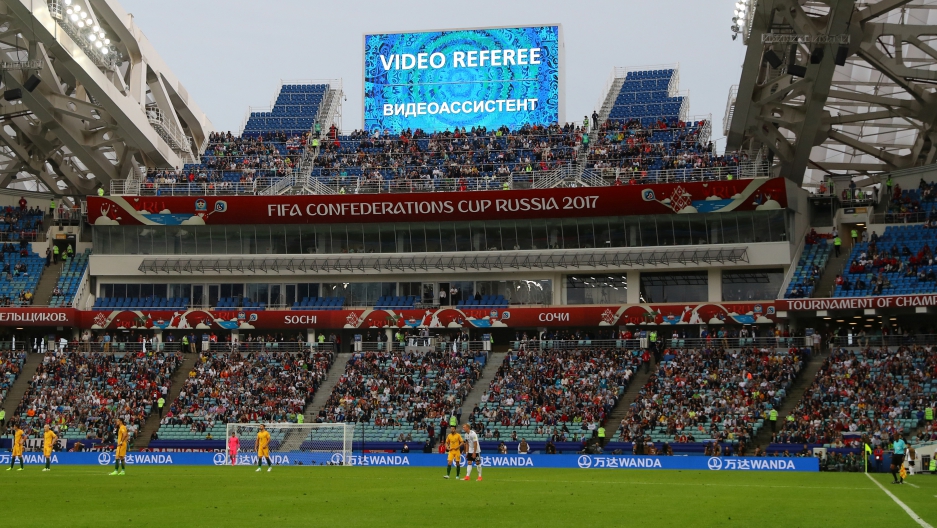 Players wait for a decision after the referee asked for a video review of Australia's second goal against Germany during a Confederation Cup match in Sochi, Russia.

A call is made by the referee on the field or court. Then, there’s a pause as officials review the video. A final call is made one way or the other.

That scene plays out in all kinds of sports all the time. It’s been that way for decades since Tony Verna introduced the instant TV replay in 1963. The list of sports that now use video technology to help officials review calls is long, and it includes American football, hockey, basketball, baseball, cricket and tennis.

Soccer is just now catching up. Reluctantly. A few years ago, the sport’s international governing body, FIFA, finally agreed to use "goal-line technology" to determine when a ball has crossed the line for a goal. Now, FIFA is experimenting with a video assistant referee, or VAR, system at the Confederations Cup tournament in Russia. It’s a trial run to see if the VAR should be used on FIFA’s grandest stage: the 2018 World Cup, also to be held in Russia.

A set of detailed rules was developed for this experiment. But here’s a quick guide to show how it’s supposed to work.

FIFA is limiting the VAR’s ability to review a play to four specific situations where potentially match-changing calls are made: whether a goal was scored or not; whether or not to award a penalty kick to one of the teams; whether a player is issued a direct red card signaling immediate ejection from the game; and whether a yellow (caution) or red card was issued to the wrong player by mistake.

The purists will always howl about tradition and the beautiful flow of an uninterrupted game and how referee mistakes are part of what makes the sport so wonderfully human.

As a soccer fan myself, I get that. I love those things about soccer. Except when there’s a wrong call, and it goes against my team. Then, it’s just frustrating.

So, I welcome this FIFA experiment, as long as the VAR system doesn’t stop the flow of the game too much. And based on what I’ve seen so far at the Confederations Cup, it doesn’t.

Reporters covering the tournament might say the VAR is “stealing the show.” But each time the VAR has been consulted so far, it’s been at times when the game was naturally stopped because of a call made on the field. And the final call followed fairly quickly.

The bigger unresolved issue is letting players, coaches and spectators know what’s going on when a review is in progress. That’s still a little confusing at the moment as referees receive recommendations from the VAR via an earpiece, leaving the rest of us momentarily in the dark.

But you can’t argue with this: Every time a video assistant referee is consulted, the end result is that the right call is made. The video doesn’t lie.