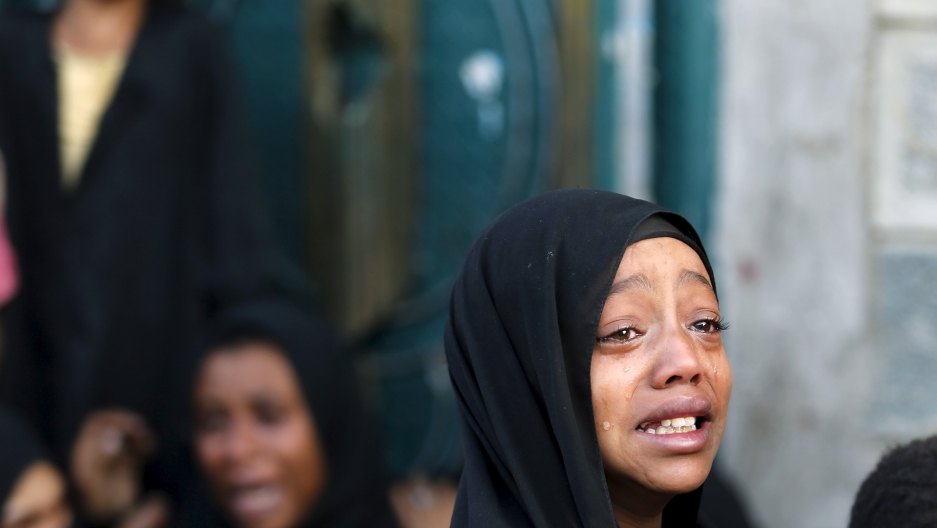 A girl cries after her father was killed by a Saudi-led air strike in Yemen's capital Sanaa July 13, 2015. Yemen's war started in March of that year.

At least 24 civilians were killed in an air raid Sunday on a market in northern Yemen, a medical official and witnesses said, blaming the Saudi-led coalition battling Yemeni rebels.

Most of the casualties worked in the Mashnaq market in the rebel-controlled Saada province on the Saudi border, an official at a nearby hospital told AFP on condition of anonymity.

Witnesses said the market was a centre for trafficking in qat, a leafy stimulant plant that is widely used in Yemen but illegal in Saudi Arabia.

One of the witnesses said some of the casualties had "just returned from a trip across the border."

The Saudi-led Arab military coalition has been accused of air strikes in Yemen for more than two years against areas controlled by the Shiite Huthi rebels.

Saada itself has come under heavy bombing since 2015, when the coalition intervened to support the government of Abedrabbo Mansour Hadi in its fight against the Iran-backed Huthis.

The coalition claimed responsibility for a deadly attack on the rebel-held capital Sanaa in October 2016 which targeted a gathering of mourners at a funeral ceremony, killing more than 140 people.

The Huthis have also accused the Saudi-led coalition of a raid last month that killed 23 civilians, including women and children, in the southwestern city of Taez.

The Saudi-led coalition — which accused the rebels of using civilians as "human shields" — has not claimed responsibility for that attack.

The rebels, who control a string of strategic ports along the Red Sea coastline and the norther highlands that border Saudi Arabia, have sporadically launched rocket attacks across the border.

In late January, the Huthis attacked a Saudi warship in the Red Sea, killing two sailors.

More than 8,000 people have been killed in the past two years and tens of thousands wounded in the war in Yemen, according to the World Health Organization.

The UN has called Yemen the "largest humanitarian crisis in the world" and warns that 17 million people, or two-thirds of the population, face a serious threat of famine this year.

More than 900 people have died of cholera in recent weeks in the second outbreak of the deadly infection in less than a year in Yemen, the poorest country in the Arab world long before the war.