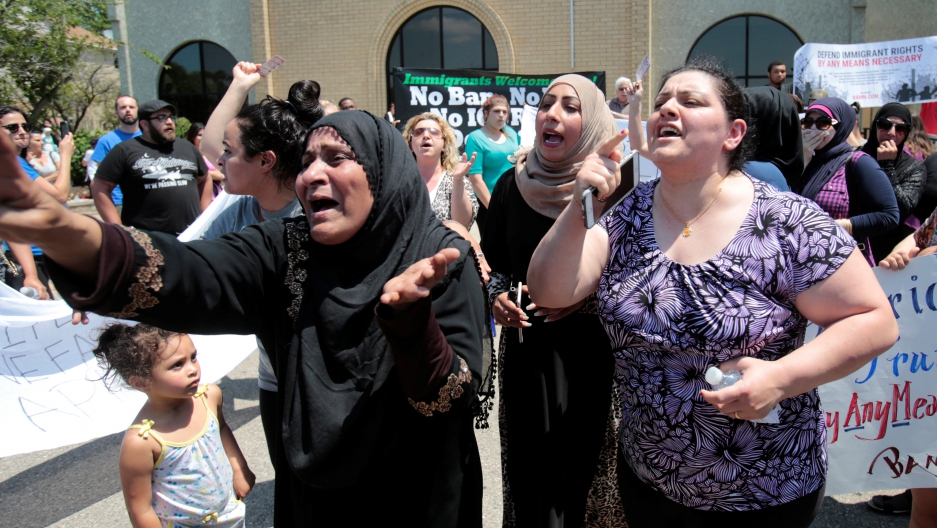 A group of women react as they talk about family members seized on Sunday by Immigration and Customs Enforcement agents during a rally outside the Mother of God Catholic Chaldean church in Southfield, Michigan, U.S., June 12, 2017.

It was 2 in the morning, on Wednesday, April 19 when a small plane took off from Alexandria, Louisiana. On it, were eight Iraqis. Raied Jabou was one of them.

"I was shackled, I was handcuffed all the way until I landed in Baghdad," he says over a WhatsApp conversation from Iraq. "When the plane started landing, then they removed the shackles from my feet and handcuffs around my waist and from my hands."

Jabou is one of about 1,400 Iraqis caught up in a deal that was struck between the US government and Iraq. After negotiations last March, the US removed Iraq from its so-called "travel ban." One condition was that Iraq accepts nationals the US wants to deport. Iraq agreed.

The process of removing Iraqis started with the first plane back in April. More recently, US immigration officials have been arresting Iraqis in Michigan and other states. This has created chaos and fear in the community. More so for the Iraqi Christian community called the Chaldeans.

Jabou is Chaldean. He's lived in the US most of his life and says he doesn't know anyone in Iraq. "When I got to Baghdad I was very scared," he explains.

At the airport in Baghdad, he was handed over to an Iraqi general. Jabou says he couldn’t contact his family for three days. He didn’t have a phone. Eventually, he asked the Iraqi general if he could use his phone to call his mom in the US.

"When he heard my mom and my sister yelling and crying, the guy automatically started crying," he says. According to Jabou, the Iraqi general worried about his safety. And he had reason too. Jabou was flown to an area near Mosul — where the fight between ISIS and coalition forces is full on. It was the only place he knew someone, a friend of a friend.

Jabou thinks he's a prime target for kidnappers. "I know 1 million percent that I would be kidnapped and killed," he says. "Because to them I am an American and I'm a Christian. Born in Iraq but raised in America." 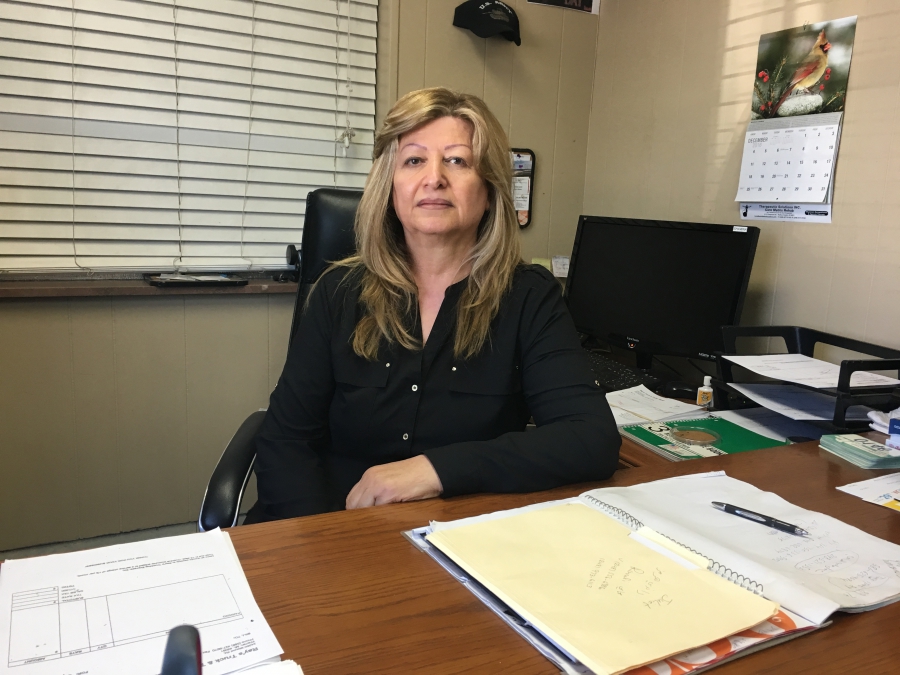 Since her son Raied Jabou was deported, Juliette Kassyonan has been helping run his business. She worries about Jabou's safety and believes his deportation was unjust.

Like many of the Iraqis detained recently by US immigration agents, Jabou has a nonviolent criminal record. He was arrested for marijuana possession 17 years ago. He did not spend time in prison for that charge but lost his green card as a result. Jabou self-deported to Iraq in 2009. Then he was admitted back to the US under parole status on humanitarian grounds. He says he was allowed back after he helped the US Army in Iraq. (He did not want to go into detail about the nature of his assistance to the military.)

But one day last year, as he was driving to work, he was picked up by Immigration and Customs Enforcement agents. He spent almost a year in jail. With no end in sight for his detention, Jabou removed his right to appear before a judge. He was deported on April 19.

"What do you want me to do in jail?" he asks, "Can some of these motherf***ers go and stay in jail one night and see what it looks like in jail?"

If Jabou uses strong language, it's because he feels betrayed. He wasn't the only one in his family to have helped the US government. His daughter is serving as an active US Marine in Japan.

Jabou says he had put the marijuana issue behind him long ago. "I'm no rapist. I'm no murderer. I'm no criminal," he says, furious.

However, public records show that ICE considered Raied Jabou "a threat to public safety due to his numerous criminal convictions including assault, revisiting or obstructing an officer, carrying a concealed weapon, and conspiracy with intent to distribute marijuana.”

His deportation as well as the recent arrests have shaken his community in Michigan. Metro Detroit is home to about 121,000 Chaldeans, according to the Chaldean Community Foundation. Many of them left Iraq over the years, the foundation says, in search of better job opportunities as well as religious and political freedom. Now, some could be sent back to the very country they, or their parents, fled.

"People are absolutely losing it," says Eman Jajonie-Daman, a lawyer who represents about 25 Iraqis who face deportation. "Families are distraught. I'm getting calls nonstop that they just picked them up. Some they go to their work, some they attack them at 4 in the morning from their homes and pluck them right out of bed from their families."

Jajonie-Daman, who's Chaldean herself, says initially she thought the immigration officials would only go after the most violent of criminals. "But now, they're picking up people without any criminal record. As a matter of fact, I have one of my clients who was picked up last week and he doesn't even have a traffic ticket, let alone a criminal record," she explains.

An official from ICE wrote in an email that all the Iraqis who were put on the April flight to Baghdad "were afforded full due process under the law and were removed consistent with the judge's orders in each case." 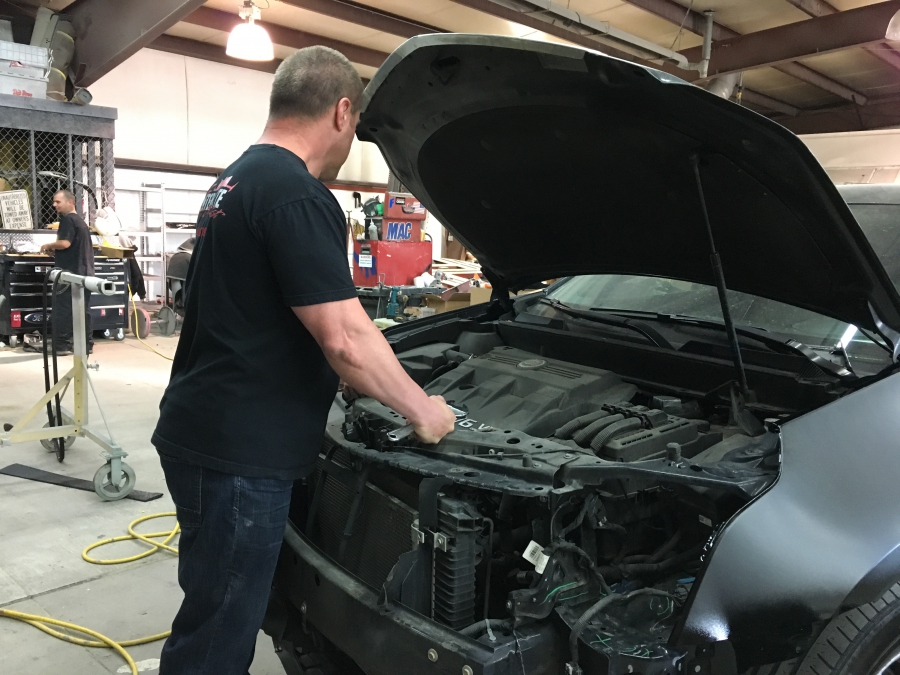 Bob (not his real name), a Chaldean, faces deportation to Iraq. He has lived in the US since he was 4 and owns an auto body repair shop in Michigan.

But many of the people who face deportation have lived in the US for years. Even decades. Jajonie-Daman believes sending them back to a war zone goes against all that this country stands for. "We are violating the very essence and the basics of human rights by taking someone, knowing they will die and sending them back there."

Related: Iraqi Christians are slowly returning to their homes, wary of their neighbors

One of Jajonie-Daman's clients is the owner of an auto body repair shop in a suburb outside of Detroit. He didn't want to reveal his real name because he worries about speaking to media about his case. We'll call him Bob. Bob is bulky and has a buzz cut. The day I visit, he's wearing a tight, black T-shirt and dark jeans.

Bob came to the US in 1974, when he was 4. He left Iraq with his mom, who, like him, is Iraqi-Christian. He grew up in Michigan. Iraq to him is a foreign land.

"I don't remember anything at all," he says. "I was 4 years old. I absolutely have no idea. I don't speak the language."

When Bob was a teenager, he started hanging out with the wrong crowd. He began selling drugs.

"At 17 years old, I was charged with possession and intent to deliver three and a half grams of cocaine," he explains. He was given probation. But then he went on to sell more cocaine, which got him into trouble again. At age 20, he was sentenced to 17 years in prison.

Bob says it was in prison where he decided to make something of himself. "I worked at the prison industry there," he says, "saved up my money and paid for my college. I got my bachelor's in finance management from Ohio University."

After serving 17 years, he was released in 2004, and started working long hours, saving up to open his auto body shop. Today, he employs 13 people. His criminal past, though, made him vulnerable to deportation.

Since 2004 Bob has checked in with immigration regularly and, every time, a judge has allowed him to stay since he’s kept out of trouble.

But then politics — world politics — changed. The US and Iraq struck a deal. Iraq would accept deportees from the US. In return, the US would take Iraqis off the list of nationalities restricted from visiting.

Now, Bob’s afraid he’ll get deported. His criminal past doesn’t look good, even though he served his time.

"There's fear," he says. "There's definitely panic. From my understanding, they will just drop you off in Baghdad and that's the biggest fear in the world."

Many of the Chaldeans around here own small businesses. Baghdad Restaurant, one sign reads not far from Bob's shop. Then there's Sahara Restaurant. Samir's Butcher shop. 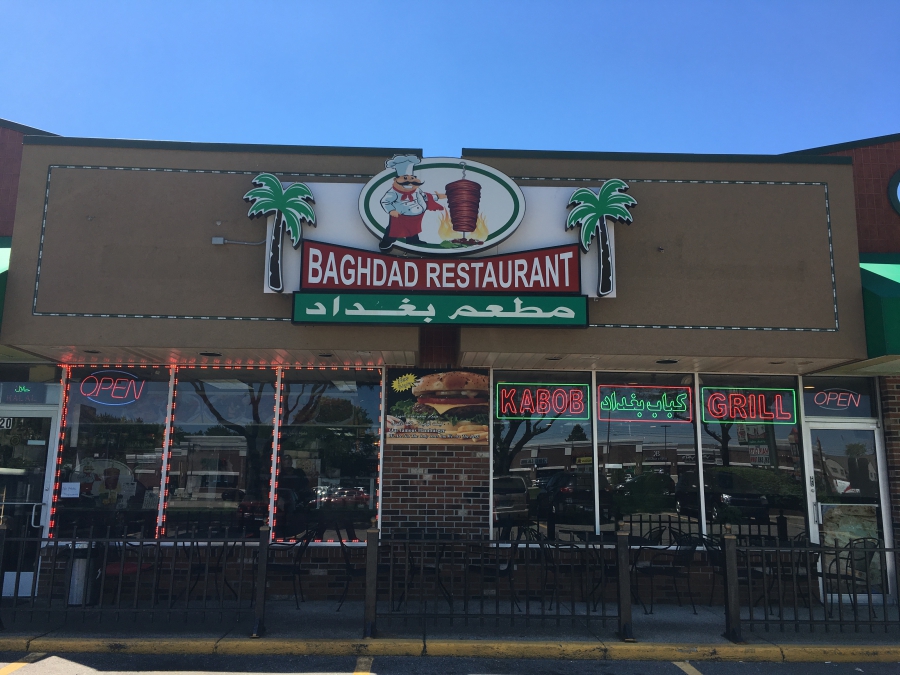 There are an estimated 121,000 Chaldeans in the metro Detroit area. Many of them are small business owners.

Historically, the Chaldeans have supported the Republican Party. With the thinking that they're better for business and they uphold Christian values.

Bob is not a US citizen, so he couldn't vote in the last election. But, he says, as a Chaldean, he's always supported the Republicans. He would have voted for Donald Trump. No question about that. "He seems to be the first president to care about Iraqi Christians," he says.

Would Bob feel the same way if he is deported to Iraq? "That's a different issue," he replies, "I know. I'm caught up in the policy."

Would he change his mind if he is sent back?

"No," he says firmly. "I would not change my mind. It absolutely doesn't change my belief."

Jajonie-Daman, Bob's attorney, thinks the next flight could leave the US very soon. And she says if the goal is to protect this country from criminals, we’re looking in the wrong place.

"These people who have served their time, finished, done, came out, they report to ICE every so often. The government knows everything about them: where they work, what they do, where they live. So if there is one group of people that could pose zero threat to our community, it's them."

Others, like Mark Krikorian of the conservative Center for Immigration Studies, disagree.

"It’s long overdue," he says referring to the recent deportation of Iraqis. "The fact is these people should have been returned to Iraq when they committed their crimes or when they were released from prison."

Krikorian says the US deports people from Central America, Mexico, other countries — Iraqis shouldn’t be an exception. Plus, he finds it hard to set aside their criminal past. "I have just no sympathy for people complaining that they should be allowed to stay here even though they have committed serious felonies."

But for Bob, it feels like double punishment. He spent years in prison, lived in the US for years after, and now is facing deportation.

"I just think as long as I'm focused on the American dream and opening up businesses and hiring people and paying my taxes I should be allowed to stay here."

As we say goodbye, Bob points out that next time, he might be speaking with me from Baghdad.

This story has been updated to reflect details about Raied Jabou's initial deportation and criminal record.