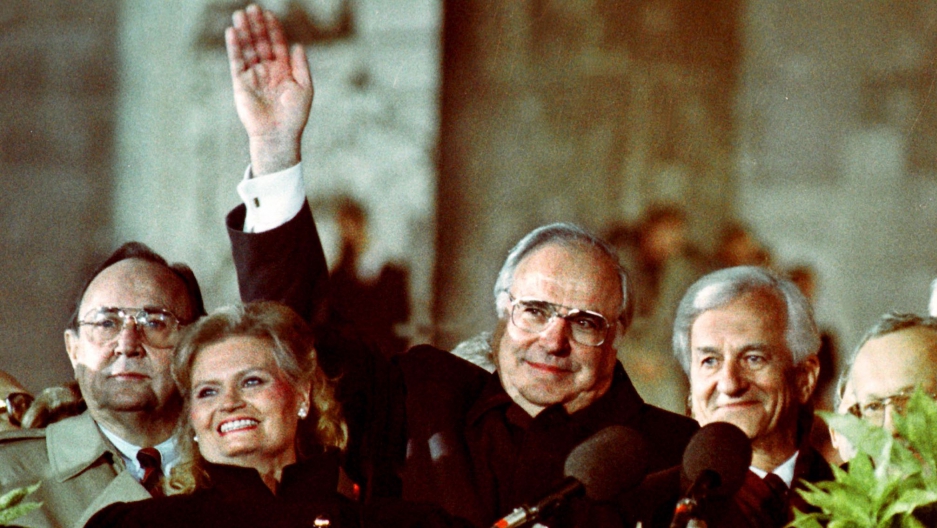 Former German Chancellor Helmut Kohl, a colossus of contemporary European history who was celebrated as the father of German reunification and an architect of European integration, died Friday at the age of 87, the newspaper Bild reported.

Germany's longest serving post-war leader died in his house in Ludwigshafen, in the western state of Rhineland-Palatinate, said the newspaper, whose management had close ties with the conservative politician.

Former US President George H.W. Bush mourned the death of Kohl, describing him as "a true friend of freedom" and "one of the greatest leaders in post-War Europe."

"Helmut hated war — but he detested totalitarianism even more," the former president said in a statement.

"Working closely with my very good friend to help achieve a peaceful end to the Cold War and the unification of Germany within NATO will remain one of the great joys of my life."

When a 52-year-old Kohl — whose surname means "cabbage" in German — first became chancellor of West Germany in 1982, the 6-foot-4-inch provincial conservative with the penchant for rustic pork dishes was the butt of countless food jokes.

But when the detested Berlin Wall came down in November 1989, Kohl moved to "grab the mantle of history," as he later said, forging a political stature commensurate with his towering height.

Former protégé Angela Merkel lauded Kohl's contribution to German and European integration in 2012, on the 30th anniversary of his becoming chancellor, declaring that Europeans were "united in our luck" thanks to Kohl's efforts.

Kohl, who served as chancellor for 16 years, considered Konrad Adenauer — West Germany's visionary first chancellor, who allowed the nation to make a fresh start after World War II — as an ideological forefather.

"After the fall of the Berlin Wall, Kohl acted as though the spirit of Konrad Adenauer had suddenly seized him," wrote Stanley Hoffmann, a professor of European history at Harvard University.

In 1989, after four decades of division, the capitalist and democratic West Germany was starkly different from the communist, dilapidated East Germany.

Uniting the two would prove a Herculean task, with "Wessis" (Westerners) loath to sacrifice their standard of living, and "Ossis" (Easterners) keen for unity but worried of being treated as second-class citizens.

On the world stage, too, the challenges were daunting.

Kohl recalled in his autobiography how he had to contend with the reticence of French President François Mitterrand to see Germany unified, and the even stronger resistance of Britain's "foot stomping" premier Margaret Thatcher.

"It was suddenly very clear to me that the Iron Lady wanted to maintain the status quo. ... All fears boiled down to one thing — that Germany would become strong again," he wrote.

Kohl assured both leaders that Germany would respect its 1945 borders and move forward "shoulder to shoulder" with its Western allies.

The conservative Kohl and the socialist Mitterrand went on to develop a warm friendship, and their tight cooperation drove Europe towards the creation of its single currency.

Kohl wrote in his memoirs that his conviction German reunification was necessary was vindicated in the fateful autumn of 1989, when protesters' chants in the East shifted from "We are the people" to "We are one people."

He cut short a visit to Poland on the night the Wall fell and rushed to Berlin, only to be jeered by the crowd.

But less than three weeks later, he unveiled a 10-point plan that decisively set East and West on course for unification.

The new country was to be the heart of an enlarged European Union — a project he believed would ensure peace — and a staunch NATO member.

Riding roughshod over the concerns of Germany's central bank, Kohl insisted that the deutschmark and the ostmark would be given the same value.

"The political — and also economic — price of delaying unification would have been much heavier than the financial burden that we accepted with fast-track reunification," Kohl insisted in 1996, by which time $480 billion had already flowed east.

"Even if I had seen those figures in 1990, I would not have acted differently on the main points."

Born a Catholic on April 3, 1930, in the western industrial city of Ludwigshafen, Kohl rose quickly through the ranks of the Christian Democratic Union party, his ever-smiling blonde wife Hannelore — with whom he had two sons — by his side.

Hannelore had long suffered from an excruciating sunlight allergy, however, and committed suicide in 2001.

Though his place in history is assured, Kohl's reputation in Germany was marred in the twilight of his career by a party slush fund scandal.

The affair helped propel a young Merkel to the helm of the party — and later the country — after she turned on her former mentor.

Kohl sniped in recent years at her handling of the eurozone debt crisis, though he left politics in 2002 and had recently been confined to a wheelchair, with his speech severely impaired after his jaw was paralyzed in a fall.