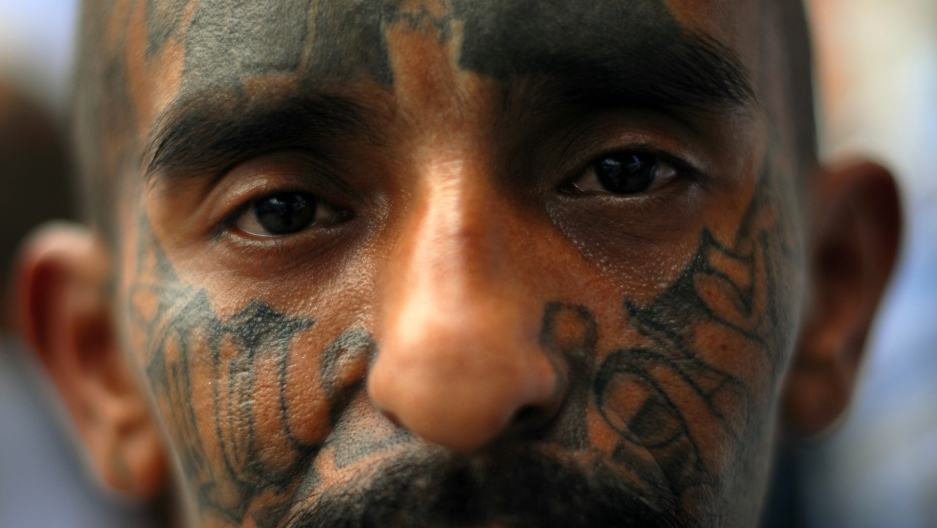 A member of the Mara Salvatrucha gang in El Salvador poses for a photograph at the prison of Ciudad Barrios March 26, 2012.

I don’t usually feel sorry for Central American heads of state. Too many of them, right-wing or left-wing, have done their damnedest to perpetuate the image of the corrupt, tin-pot strongman.

If you needed any reminding: U.S. marshals arrested Panama’s former President Ricardo Martinelli in Coral Gables this week. The wealthy, authoritarian right-winger is wanted back in Panama for pilfering millions of dollars intended for the poor and using it to spy on opponents. (At his extradition hearing in Miami federal court, Martinelli denied the charge.)

But I gotta admit I feel sympathy for the presidents who are in Miami for the Conference on Prosperity and Security in Central America. The gathering, hosted by the U.S. and Mexico, is being held at Florida International University and the U.S. military’s Southern Command. It could make Americans, or at least South Floridians, more aware of how critical Central America’s economic and security recovery is to the U.S., from trade to drugs to immigration.

Instead, Central American leaders will see their spotlight dimmed by America’s spotlight thief-in-chief, President Trump, who’s set to swoop in to Miami tomorrow to announce his long-awaited changes to Cuba policy.

According to sources close to Trump's Cuba revision team, the President will likely re-tighten restrictions on American travel to the communist island, which were loosened by former President Barack Obama and his normalization of U.S.-Cuba relations.

Sorry, Miami, but in terms of issues that directly affect and painfully divide this country — especially drugs and immigration — Central America's frightening poverty, corruption and gang violence emergencies are more important than Cuba.

Trump may make it harder for Americans to score authorization for Cuba visits — like narrowing the definition of people-to-people exchange, which has ushered in quasi-touristic U.S. excursions. (U.S. tourism to Cuba is still illegal under the trade embargo.)

The President also looks set to re-close opened doors to U.S. business deals with the Cuban government — especially the military and its vast holdings in tourism and other sectors.

Cuba watchers say barring the kind of permission U.S. companies like Starwood Hotels recently secured would tacitly make it verboten again for U.S. business to do anything that remotely smacks of handing hard currency to the Castro regime. Which is what Cuban-American hardliners like Florida Senator Marco Rubio are pushing for.

If that happens, "it would be a backdoor but effective way to blow normalization up,” says one Miami consultant to U.S. firms negotiating opportunities in Cuba.

Trump will argue it’s the way to get Cuba to improve human rights, something the regime didn’t make much of an effort to do when Obama was President.

And human rights in Cuba do matter, of course. A great deal. But Central America matters too. Even more.

That’s heretical talk in Miami, where officials do everything but staple notices to our property tax bills reminding us Cuba is the most important foreign policy issue in the history of mankind. But in terms of issues that directly affect and painfully divide this country — our chronic illegal drug consumption crisis, for example, but especially our illegal immigration quandary — Central America’s frightening poverty, corruption and drug-gang violence emergencies are more critical.

In fact, Washington itself has labeled Central America’s northern triangle — Guatemala, El Salvador and Honduras — the deadliest zone in the world today outside Syria. The situation is most horrific in El Salvador, where tattooed street mafias known as maras – who essentially rule whole swaths of the country – have produced the world’s worst murder rate.

That’s a pretty hefty human rights issue, too. The northern triangle’s political dissidents may not face jail as often as they would in Cuba; but teens who refuse to join the maras, or their parents who refuse to pay extortion money, face murder. That’s largely why they become undocumented immigrants to the U.S.

The aim of the Miami conference — which also features U.S. Secretary of State Rex Tillerson, Homeland Security Secretary John Kelly and Vice President Mike Pence — is to hash out how to pull the northern triangle out of its tailspin.

The best way is to continue the almost $1 billion social investment in the region that Obama started. But Trump’s budget would slash funding for that effort. Instead, he’ll storm into Miami on Friday to push Cuba policy back into the Cold War. And steal the spotlight from where it ought to be shining.

A version of this story appeared on WLRN in South Florida.