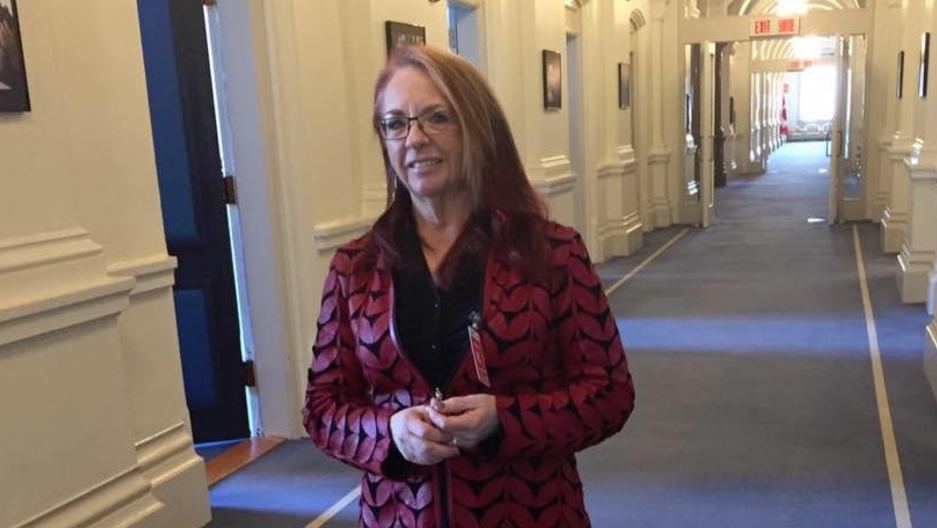 Michelle Gawronsky has been an advocate for victims of domestic violence.

Christine met her husband when she was just 17. He became emotionally abusive early on, and it escalated when their first child was just 3 months old. She knew she needed to leave him, but as a stay-at-home parent, she felt trapped — not having an income of her own.

Later, Christine (not her real name), of Winnipeg, Manitoba, got a job. She'd been working for six months when her husband hit her for the second time. Now, she was worried about asking her boss for time off from work, to move herself and her two young children.

“I was afraid I was going to be judged because you're coming from an abusive relationship; you're asking to be accommodated because of this,” she said. “I was scared, very scared, especially at that point because I couldn’t afford to lose my job.”

Eventually, Christine mustered up the courage to get out of the abusive situation, fortunately with backing from her employer, who agreed to let her use holiday time to do what she needed to do. Today, some 20 years later, she’s a human resources executive. But she’s still so ashamed of what happened to her that she’s asked to remain anonymous.

It’s an all-too-familiar tale, and one a growing number of labor leaders and legislators in Canada and elsewhere across the globe are tackling — with legislation that guarantees job security for victims of domestic abuse and requires employers to give people paid time off to deal with the consequences.

If adopted, the new rules would be an important addition to the resources already available to help domestic abuse victims.

Barb MacQuarrie, community director of the Centre for Education on Violence Against Women and Children at the University of Western Ontario, is a leading advocate for the legislation. For starters, she says, the rules establish domestic abuse as a workplace issue — not just a private one. That in and of itself goes a long way in encouraging people to get the help they need. It breaks down economic barriers for victims, and it lessens the stigma, as well.

“Domestic violence thrives when people don’t know about it. It thrives behind those walls of secrecy, and so, opening up the conversation is a really important step towards addressing the problem,” said MacQuarrie, who heads an international partnership of academics and domestic violence experts pushing for paid domestic violence leave in various countries around the world.

MacQuarrie was inspired by recent efforts in Australia to convince employers to provide paid and unpaid leave to workers dealing with the fallout from domestic abuse. Unions there began negotiating for domestic violence leave in employee contracts beginning in 2011. Roughly 2 million employees in that country now have access to such leaves.

The province of Manitoba was among the first in Canada to take up the cause, thanks in large part to lobbying by the Canadian Labour Congress, which also launched an online domestic violence resource center for women’s advocates. Manitoba passed a law last year giving workers up to five days of paid time off, five days of unpaid time off and an additional unpaid leave of up to 17 weeks. The law stands out, as it guarantees paid leave for every worker in the province, not just those who belong to a union. Ontario is looking at doing something similar, and the United Steelworkers of Canada include paid domestic violence leave as a standard demand in contract negotiations.

Other countries such as Australia, the Philippines and some US states are also taking on similar legislation. In fact, Filipino workers have paid domestic violence leave on a national level, however, the benefit is not well-known or widely enforced. In the US, California, Connecticut, Massachusetts, Oregon, Vermont and Washington, DC, have laws giving workers paid leave if they are victims of domestic abuse.

Likewise, business leaders all over the place, like in Turkey, have put out studies on the impact of domestic violence in the workplace. So has the UN.

Today, in Canada, victims of domestic violence have a lot more support than they did when the first Canadian women’s shelter opened in Toronto in 1973. Police are trained to press charges in domestic violence cases; shelters across the country have better public funding; and women aren’t blamed as much as they once were, for what happened to them, said Anuradha Dugal, director of violence prevention for the Canadian Women’s Foundation, a lobby group that helps raise funds for women’s shelters.

But there are still many obstacles for those trying to get out of an abusive relationship.

Lower incomes and higher income insecurity often go hand in hand with higher rates of abuse for both men and women, according to a survey by the DC-based National Network to End Domestic Violence.

And a 2014 survey of Canadian workers found that finances are a very real concern. In the survey, which was conducted by MacQuarrie and supported by the Canadian Labour Congress, about 34 percent of respondents said they had been abused by their intimate partners — with whom they often share financial responsibility. Of those respondents, 9 percent lost their jobs for reasons connected to the volatility at home.

In Canada, victims of domestic violence lose about $34 million in wages, says a 2009 study on the cost of domestic abuse in the workplace. 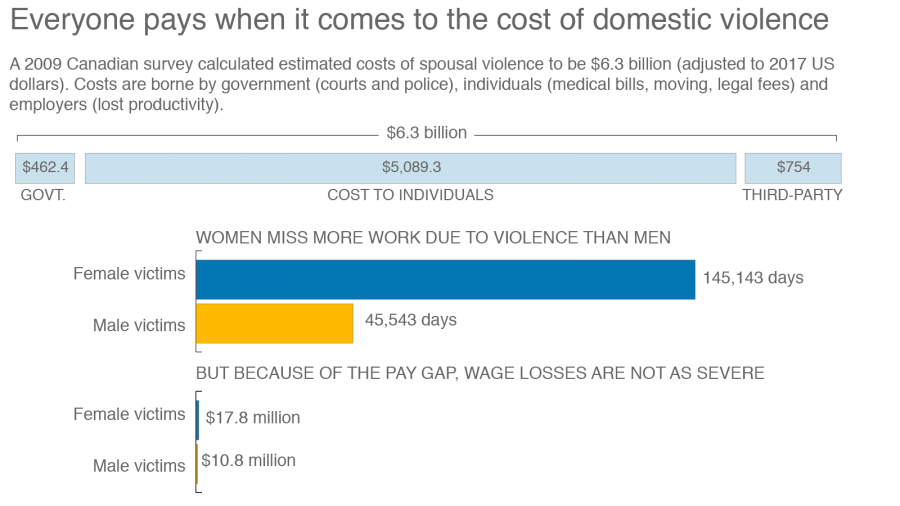 Source: An Estimation of the Economic Impact of Spousal Violence in Canada, 2009. Monetary values were adjusted for inflation using the Bank of Canada’s inflation calculator and then converted to US dollars.

Another challenge is the fact that there's a lack of information about how to get help, MacQuarrie says. She says research into domestic violence deaths shows that abuse victims often confide in someone close to them, but that the confidant feels helpless to intervene.

“We have lost some crucial opportunities to intervene and prevent the very worst scenario — death — because people close to them just don't know what to do,” she said.

She said she hopes that bringing the issue into the workplace will educate all workers about domestic violence and how they can help if they know someone is being abused. “When you think about it, the majority of adults are in the workplace,” she said. “So, the workplace presents itself as a safe way to provide options.”

Michelle Gawronsky, president of the Manitoba Government and General Employees’ Union, is a vocal advocate for paid domestic violence leave. Gawronsky says she herself stayed with an abusive husband for too long, mainly because she didn't know how she was going to make ends meet. Her mother, the late Kathleen St. Godard, faced a similar predicament. Both women managed to escape the violence, ultimately, but Gawronsky fared better because she had her employer’s support.

When Gawronsky left her husband, her boss “put me on vacation and never said anything to anybody.” In a week’s time, she was able to get legal assistance, get herself and her children settled at home and then return to work.

She and her husband later reconciled, with the help of counseling, but “without that time, I would have taken shortcuts, and that’s what a lot of women do because they needed to get back to work and then the violent person can very quickly come in and take control of your life again,” she said.

Dugal, of the Canadian Women’s Foundation, said a lot of female domestic abuse victims find themselves in a similar plight. “Many women stare at this and say, ‘How can it be a better choice for me, to put my child in poverty rather than stay with this partner and try to make things work,’” she said.

That’s where the new legislation comes in. However, it can be hard to get employers on board. This was the case in Manitoba, which saw pushback from the business community.

William Gardner, a lawyer and head of the Manitoba Employers’ Council, which represents 23,000 employers in Manitoba, isn’t so sure that domestic violence is a workplace issue. Typically, he says, employers are fine with giving workers vacation days or sick leave, and he doesn’t see the need for mandated time off. He argues that domestic violence leave is too expensive.

And while he can think of all kinds of valid reasons for missing work, he doesn’t think employers should have to bear the brunt of the cost.

But MacQuarrie’s research in 2014 makes a strong case that domestic abuse has a significant impact on the workplace. Often, domestic violence follows victims to work, in one form or another — like abusive phone calls or text messages, stalking and harassment. Furthermore, 82 percent of those surveyed said that trouble at home negatively affected their performance in the workplace because they were either distracted, tired or unable to concentrate.

MacQuarrie sees Australia's example as a success story. Employees tend to take off less time than they're entitled to, an average of two or three days off to deal with legal and medical concerns, move or take steps to improve their safety, early data from the Australian Council of Trade Unions shows.

Christine, the mother of two, says she was fortunate that her boss was sympathetic to her situation, hiring extra security when she worked an overnight shift and eventually switching her to daytime hours. But the fact that she used up her paid time off meant she had no sick days or vacation time to deal with her toddlers' childhood illnesses. She was living paycheck to paycheck and could barely afford groceries.

Looking back, she says, she probably would’ve left her husband, sooner, had paid domestic violence leave been in place back then. “I wouldn't have been as afraid to come forward to my employer and put my hand up because it's there; because there's an obligation to help and support people going through that,” she said.