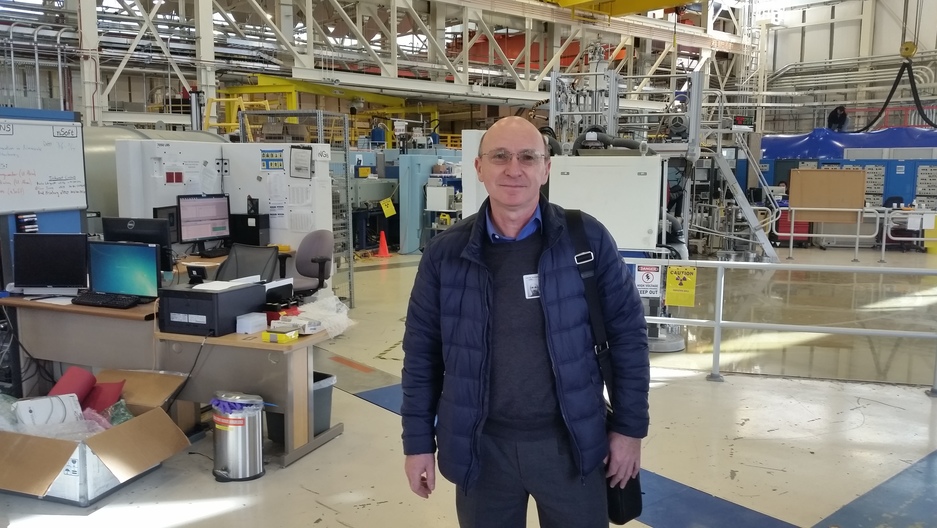 Dr. Andrei Afanasev tours a nuclear reactor during a visit to the National Institute of Standards and Technology in Gaithersburg, Maryland on March 13, 2017. Afansev came to the US after the dismantling of the Soviet Union. American scientists recruited him from his lab in Ukraine.

When President Donald J. Trump announced that he would pull the US out of the Paris Climate Accords, European leaders quickly piled on criticism. French president Emmanuel Macron addressed American scientists and engineers: "I want to say that they will find in France a second homeland. Come, and work here with us."

Macron's invitation may have seemed like a bold move to recruit talent from the US, and position Europe as a leader in climate policy. But it also echoed an American strategy from a quarter of a century ago. In the waning years of the Soviet Union, the US began recruiting Soviet experts for jobs in nuclear physics, mathematics and defense.

One of those experts was Andrei Afanasev. He grew up in Kharkov, Ukraine, when the country was still a part of the Soviet Union. Afanasev's father, a nuclear physicist, often took his son to picnics with physicist colleagues. "It was like a different world," Afanasev recalls.

As the Soviet Union started to falter in the 1980s, so did Soviet science. When Afanasev was a university student, the Soviet nuclear power plant at Chernobyl exploded. It was only a few hundred miles from Kharkov. The Afanasev household suddenly became a meeting place for the emergency because of his father's expertise. "We had all these neighbors coming in, and asking him to check them for radiation levels," Afanasev says.

For much of the Soviet era, scientists had status. When Afanasev graduated from university, he joined a government lab. Even though he didn't work on nuclear weapons, he had a stable job and special access to rations. But the stability started to slip away when the Berlin Wall fell. After the Soviet Union dissolved in 1991 and Ukraine gained independence, Afanasev's monthly salary only amounted to US$30 in the new economy.

"Borders became open," he says of the transition from the Soviet economy to an open market. "Then you realize how miserable you are."

After decades of rivalry with the Soviet Union, the US was ready to capitalize on post-Soviet misery. American scientists visited laboratories in Eastern Europe with a message: If your country doesn't have jobs for you, come work with us.

"The scientists all fled to the West," Afanasev says. "Maybe 80 percent."

When American scientists visited Afanasev's lab in Ukraine in the early-90s, they invited him to work as a visiting scientist at Jefferson Labs, a half-billion dollar government facility in Newport News, Virginia. "So my wife and daughter came with a little suitcase," Afanasev says. The original plan was to stay for three months. "It ended up to be 17 years."

Sometimes Afanasev missed his home country of Ukraine. He used to discuss physics on the phone with his father.

"After he passed away, I've been talking to him for about three years," he says. "In my head."

Still, homesickness or not, Afanasev's priority was to follow the science. In the US, he looked for new ways to apply particle physics. He worked on defense projects and tried to improve the safety of nuclear power plants. Today, he's a professor at George Washington University.

This year, Afanasev plans to convert his green card, which gives him legal permanent resident status, into US citizenship. One reason is that his sons are American teenagers, and matching passports would make international travel easier. He's also working for defense projects that require security clearance.

"When you come to the cafeteria, there is a lot of Russian speech. But people who are speaking Russian are actually American citizens now," Afanasev says.

He still hasn't managed to separate politics and physics. When Russia seized Crimea from Ukraine in 2014, US-Russia relations became icy once again. Growing up, Afanasev never paid much attention to nationality. He viewed Ukrainians and Russians as one and the same. But now there's a big difference. And whenever violence breaks out between the two countries, it feels personal.

"Maybe it's my fault also, because I left my country," he says. "If you're a citizen of your country, and you care what is going on there, you should be there and help to solve the problem."

But Afanasev isn't planning to move back to his country of birth. Instead, he's trying to build a bridge between the US and Ukraine. He wants to recruit a new generation of Ukrainian scientists to work here. And he hopes that both countries can benefit.

Also: A physicist who always dreamed of working in the US says it’s no longer the ‘global center of science’