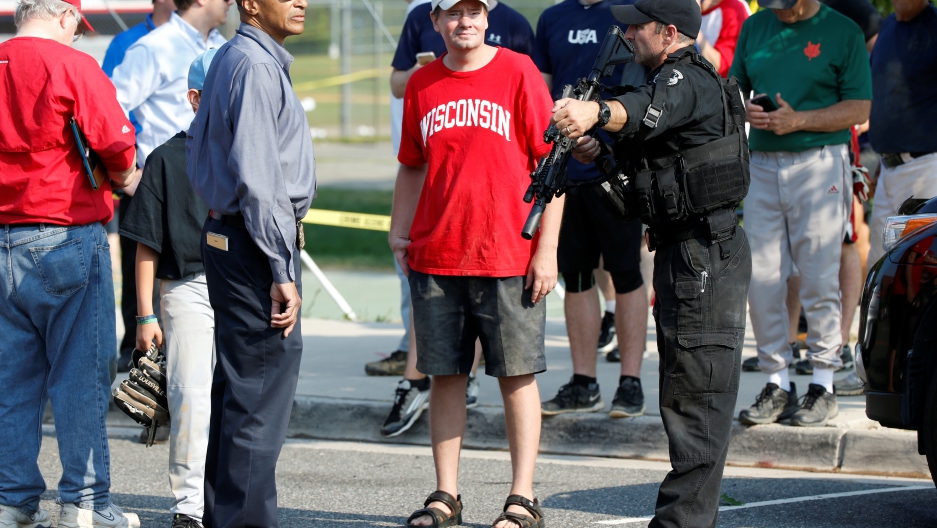 A man wielding a rifle opened fire on lawmakers and staff at a baseball practice just outside the US capital early Wednesday, wounding a top Republican congressman and several others.

Congressman Steve Scalise, the majority whip who rallies Republican votes in the House of Representatives and one of around two dozen lawmakers at the baseball field in Alexandria, Virginia, was shot in the hip, but was in stable condition after surgery, according to his office.

The gunman was taken into custody after being wounded in a shootout with Capitol Police, but his motive was not immediately clear. He later died, President Donald Trump said in remarks to the nation.

"Many lives would have been lost, if not for the heroic actions of the two Capitol police officers who took down the gunman despite sustaining gunshot wounds during a very, very brutal assault," Trump said.

Alexandria Police Chief Michael Brown said five people were transported to hospital following the shooting, which broke out at arund 7 a.m. They included the gunman, according to the Washington Post.

No other members of Congress were shot. The other wounded included a congressional staffer and two members of the Capitol Police who were assigned to guard Scalise.

Capitol Police Chief Matthew Verderosa said his officers were "in good condition" and their injuries were not life-threatening.

President Donald Trump tweeted a message of support to his "friend and patriot" Scalise, calling himself "deeply saddened" by the incident in Alexandria, where schools were briefly placed on lockdown.

FBI Agent Tim Slater would not characterize the attack, saying "We are exploring all angles."

It is "too early to tell if they were targeted or not," he said of the Republican lawmakers.

He would also not confirm a report by CBS that the gunman was welding a high-powered semi-automatic assault rifle.

'He knew who we were'

The shooting took place during the Republican team's practice for an annual charity game against Democrats scheduled for Thursday.

Congressman Rodney Davis told CNN he was up for bat at the time, and Scalise was in the field at second base.

"I was batting, we heard a loud noise.... The next thing I remember was somebody on the field yelling 'Run, he's got a gun.'"

Republican Senator Jeff Flake told reporters some 50 shots rang out in the exchange of fire between the gunman — described as a white man with dark hair, in his 40s or 50s — and law enforcement officers.

Police chief Brown said his officers arrived at the scene within three minutes, engaged the suspect together with the Capitol Police officers and took him into custody.

"It would have been a massacre. And having no self-defense, the field was basically a killing field. If you were to run out while the killer was still shooting, he could have shot anybody," he told reporters.

Asked whether he thought it was a random shooting, Republican lawmaker Mo Brooks, who was preparing to bat at the time, told CNN: "It sure as heck wasn't an accident."

"People know this is the Republican baseball team practicing," he said. "He knew who we were. I'm a former prosecutor and, yeah, he was going after elected officials, congressmen."

Held almost every year since 1909, the Congressional Baseball Game — slated to take place at Nationals Park stadium in Washington — is a well-loved showdown between Senate and House members of both Republican and Democrat camps.

Scalise's office said the 51-year-old was in stable condition at a Washington hospital after being shot in the hip.

"Prior to entering surgery, (Scalise) was in good spirits and spoke to his wife by phone," it added in a statement.

Trump described himself as "deeply saddened by this tragedy," saying in a statement his "thoughts and prayers are with the members of Congress, their staffs, Capitol Police, first responders and all others affected" and that he was closely monitoring developments.

Vice President Mike Pence canceled a planned speech to the national homebuilders' association and headed to the White House where Trump was scheduled to deliver remarks on the shooting.

Lawmaker Brooks described Scalise dragging his body across the pitch to get away from the shooter while the firing continued.

After the shots subsided, he and others at the scene attempted to tend to Scalise's wound, while Brooks took off his belt and used it as a tourniquet for a bleeding staffer who had been shot in the leg.

Scalise, a representative from the southern state of Louisiana elected to Congress in 2008, heads the conservative House caucus known as the Republican Study Committee.

The staunch conservative is among the lawmakers leading the drive to repeal former president Barack Obama's signature health care law, among other top Republican priorities.