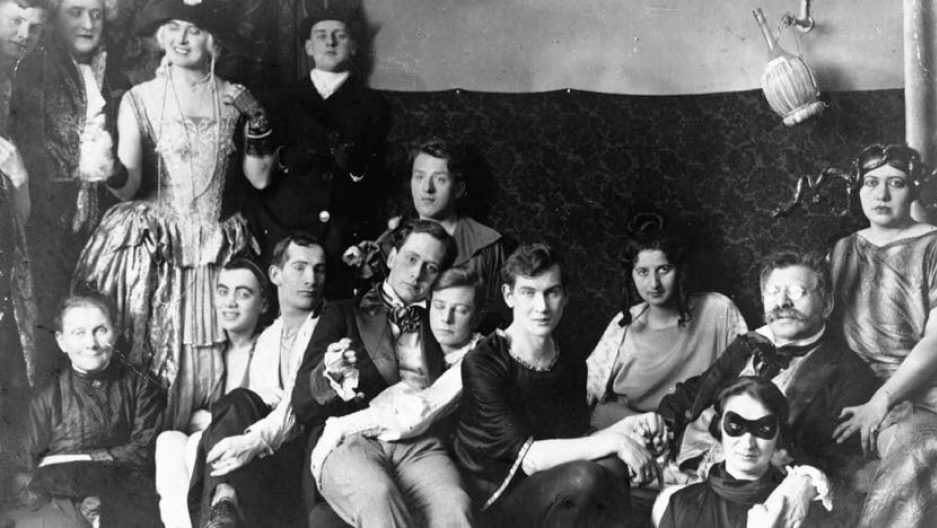 A party at the Institute for Sexual Science is shown here. Magnus Hirschfeld (second from right) is the one with the moustache and glasses. His partner Karl Giese is holding his hand.

Decades before Alfred Kinsey developed his scale for human sexuality, there was Magnus Hirschfeld — a doctor who dedicated his career to proving that homosexuality was natural.

Hirschfeld’s reasoning was simple: In turn of the 20th century Germany, where he lived, a law called Paragraph 175 made so-called “unnatural fornication” between men punishable by prison time.

“Magnus was gay himself,” says Undiscovered podcast co-host Elah Feder. “He was both a scientist and an activist, and he was really hoping that his science would lead to greater acceptance of gay and lesbian people.”

Subscribe to Science Friday
Undiscovered, the latest podcast from public radio show Science Friday, takes you behind the scenes of science's biggest discoveries and breakthroughs.
Subscribe on iTunes

Hirschfeld founded what’s considered to be the first gay rights organization and established the Institute for Sexual Science in Berlin. He also gained international renown for his radical research on the biology of sexual orientation. “He was, in the 1930s, touring the world lecturing about sexuality in China and India,” says co-host Annie Minoff. “The American press actually called him the ‘Einstein of sex.’”

But as Minoff and Feder explore in a recent episode of Undiscovered, Hirschfeld’s legacy didn’t turn out quite as he’d hoped.

“Magnus was using the science at his disposal, right?” Minoff says. “So now, we might talk about genetics or even epigenetics, but back in his day, scientists could see chromosomes under the microscope, but they still weren't sure if they had anything to do with heredity.”

“So, Magnus was really all about documenting and recording things like physical traits or behavioral traits, trying to see what gays and lesbians might have in common or might be different than the rest of the population.”

Today, some of Hirschfeld’s research comes across as antiquated, even a bit zany. In one excerpt from his book, “The Homosexuality of Men and Women,” Hirschfeld debunks an apparently long-held stereotype that gay men can’t whistle.

“This does not agree with the results of our statistics,” he wrote, explaining that in a sample of 500 gay men, 77 percent could whistle, although “only a few could truly whistle well.”

“But he found that among lesbians, the whistling arts were very strong, which was nice to hear,” Feder adds.

Other aspects of Hirschfeld’s science have better weathered the tests of time. “So, for example, he was interested in whether homosexuality ran in families,” Feder says. “You know — was it a heritable trait?”

“Or, you might remember a few years ago, there were a bunch of studies looking at the correlation between finger length ratios and sexual orientation. They seemed to find a connection in women. And he did stuff like that. He was looking at hip-to-shoulder ratios — pretty pioneering sex research.”

In 1919, Hirschfeld opened his Institute for Sexual Science, a big villa in Berlin’s Tiergarten. “They had medical examination rooms, they had a library, they had a sex museum that was apparently a big tourist attraction,” Feder says.

“They had a little box at the edge of the property, and people could anonymously insert slips of paper with questions about sex or any sort of sexual issue that they had,” he says. “And then people were invited in, and these different slips of paper would be read out loud and then responded to.”

“There were questions about things like, I don’t know, [about] premature ejaculation and how effective it was to use condoms for preventing pregnancy. You know, just lots of relatively mundane questions. But it was supposed to be a public service.”

But if Hirschfeld hoped that greater scientific understanding could change Germany’s discriminatory law, Feder says things didn’t quite turn out that way in his lifetime. (Paragraph 175 wasn’t struck down until 1994.)

“It’s a nice idea,” she says, “but as we end up seeing in Magnus’ story, you can do science, you can hope that it’s going to be used in one way, and it can work out very differently.”

“And his story ultimately is a pretty tragic one.”

This article is based on an interview that aired on PRI's Science Friday with Ira Flatow. You can listen to the full episode about Magnus Hirschfeld on Undiscovered.