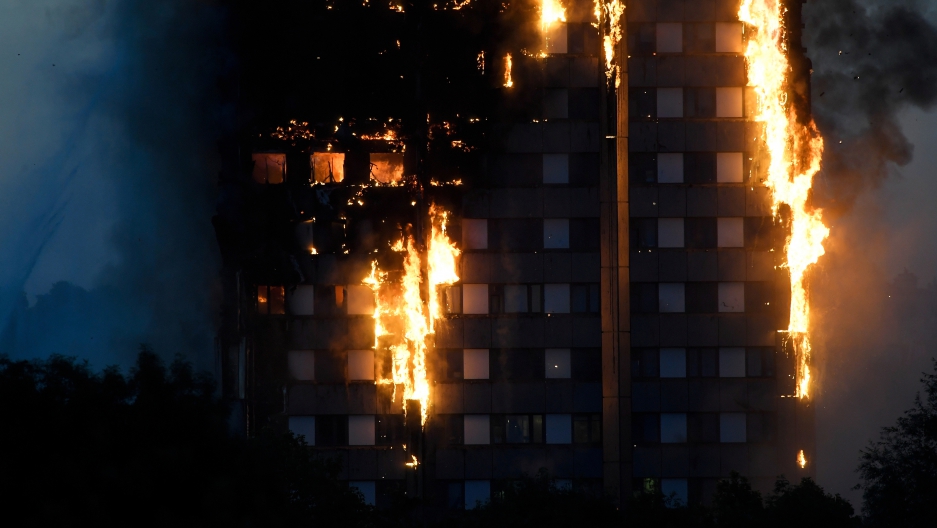 Flames and smoke billow as firefighters deal with a serious fire in a tower block at Latimer Road in West London.

At least 12 people perished on Wednesday after a massive inferno tore through a London apartment block, with witnesses reporting terrified residents had leapt from the tower and dropped their children in a desperate bid for survival.

As smoke continued to billow from the gutted building, survivors voiced anger over longstanding safety fears at the 24-storey Grenfell Tower, which was home to between 600 and 800 people.

Parents wrapped wet towels around their children as they tried to escape, while others were seen desperately waving for help from the higher floors, which firefighters could not reach at the blaze took hold.

"There are now 12 people that have died that we know of," police commander Stuart Cundy told reporters at the scene.

"I do anticipate that the number of fatalities will sadly increase" he said, adding that he did not expect fire crews hunting through the debris to find any survivors.

Seventy-eight people were being treated in hospitals, 18 of whom are in a critical condition. 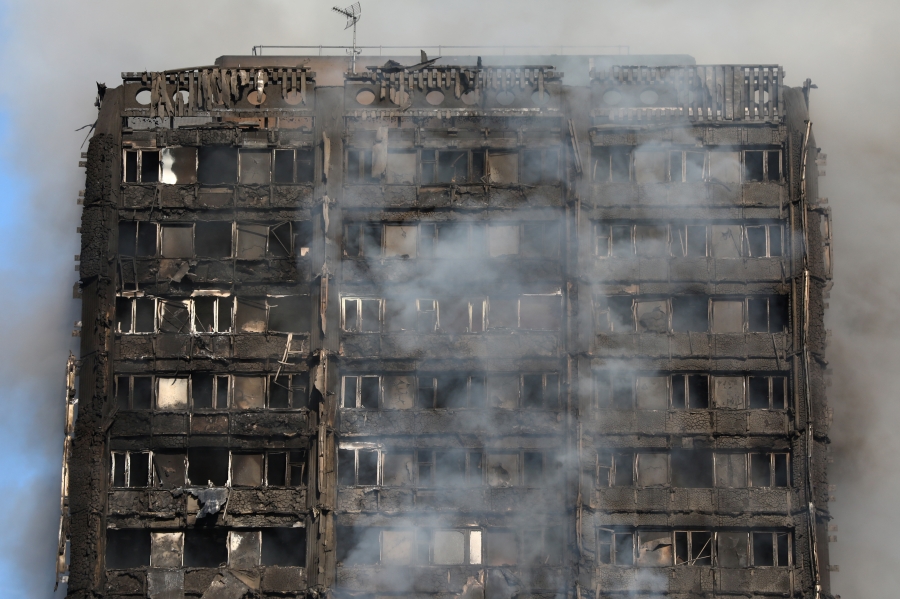 The alarm was raised just before 1:00 am (0000 GMT) and within an hour flames had engulfed the entire block of 120 flats.

More than 200 firefighters had been tackling the blaze and managed to rescue 65 people.

Some 16 hours on, pockets of flame were still burning inside, and fire crews had reached the top. They had used drones to examine the upper floors.

Blazing chunks of debris fell from the wrecked building, a 1970s local authority-built block in the working-class area of north Kensington, just streets away from the wealthy homes of Notting Hill.

Residents claimed the fire spread on the exterior of the tower, which had been covered in cladding in a major refurbishment completed last year. 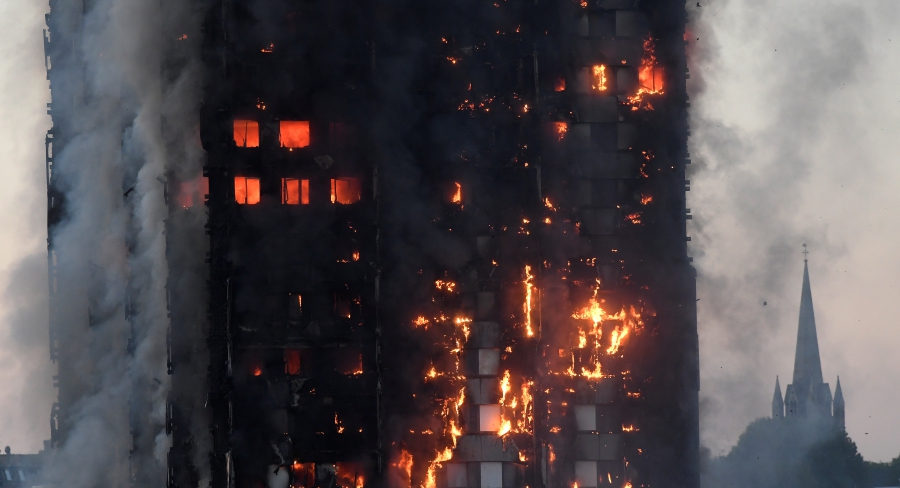 The London Fire Brigade said the cause of the fire was under investigation, but its chief Dany Cotton said she had "never seen anything on this scale" in her 29-year career.

'We saw them dying'

Witnesses said they heard screaming from the upper floors as the flames raced up the tower.

"I saw people jumping out of their windows," Khadejah Miller, who was evacuated from her home nearby, told AFP.

Two witnesses said they saw children dropped by their parents out of the building into the arms of people on the ground. 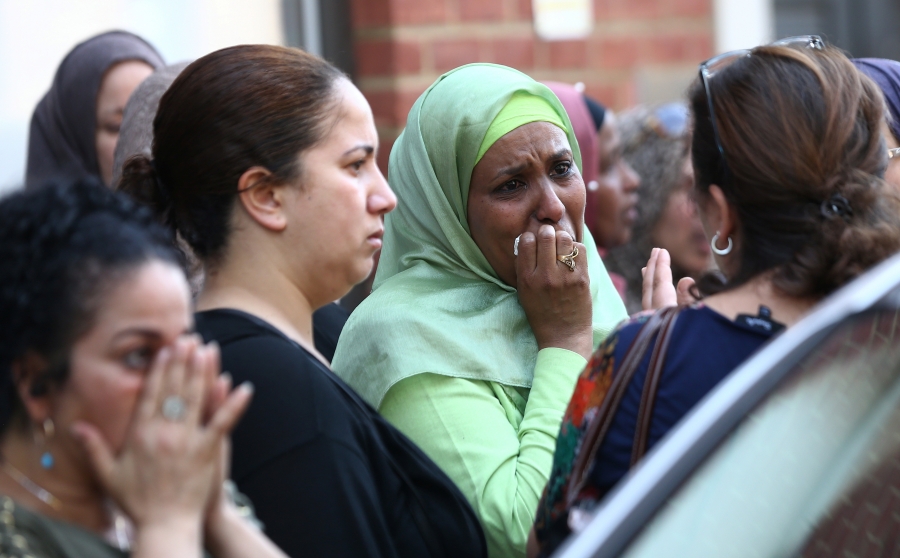 Adi Estu, 32, who lives nearby and took refuge in a church with her husband and nine-month-old son, said: "I saw people flashing their lights for help, families flashing their mobile phones like a torch. But the smoke covered them.

"We saw them dying."

Members of the local community delivered food, water, blankets and clothes to the local church and nearby community centre, where frantic families attempted to call their loved ones, fearing they could be stuck inside.

Eddie Daffarn, a 16th-floor resident, said he struggled to find the stairs as the building filled with black smoke until a fireman grabbed his leg and directed him to safety.

He said residents had complained for years about mismanagement of the block, saying he had warned that "one day there will be a catastrophic fire and that will hold these people to account".

"This is mass murder and these people need to be put into court," he said. 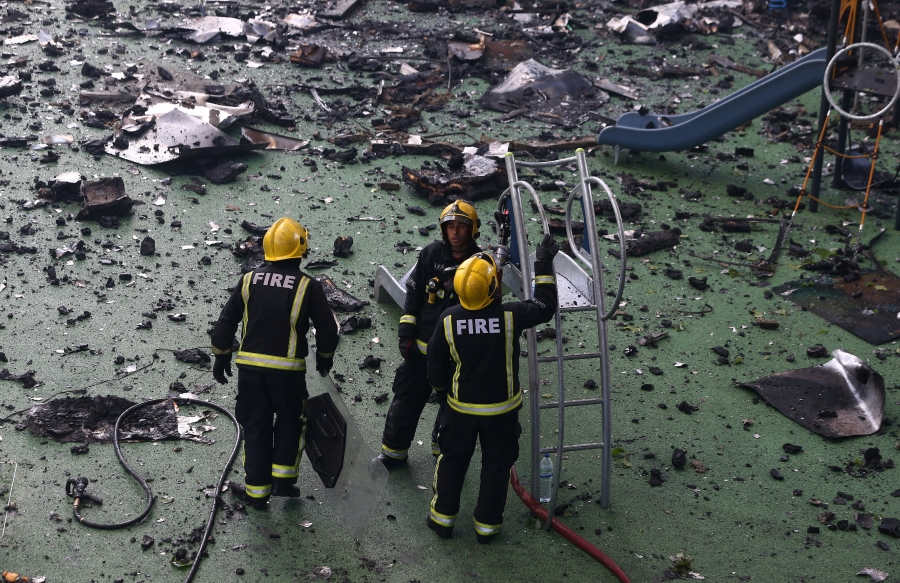 Firefighters stand amid debris in a childrens playground near a tower block severly damaged by a serious fire, in north Kensington, West London, Britain, June 14, 2017.

Prime Minister Theresa May said she was "deeply saddened" by the situation and has called an emergency meeting to coordinate the response to the fire, which comes just 11 days after eight people were killed in a terror attack on London Bridge and Borough Market.

May faced further delays in forming her new government after a failed election gamble when her would-be allies said their agreement would be put back following the blaze.

The apartment block was built in 1974, but had recently undergone a major refurbishment, including a new heating and hot water system and new cladding on the outside.

Rydon, the construction firm which carried out the refurbishment, said it "met all required building control, fire regulation and health and safety standards".

David Collins, a former chairman of the Grenfell Tower residents' association, said he was shocked but not surprised by the fire.

"Ninety percent of residents had signed a petition at the end of 2015 complaining about the mismanagement," he said.

"If the same concerns were had in a wealthy part of Kensington and Chelsea they would have got resolved, but here they didn't."

Local authority landlords KCTMO sent their "sincere and heartfelt condolences" to those affected by the tragedy.

"We always take all concerns seriously and these will form part of our forthcoming investigations," they added.

Fire minister Nick Hurd said checks would be carried out on tower blocks going through similar refurbishment to Grenfell Tower.

Angus Law, from the Centre for Fire Safety Engineering at Edinburgh University, said the blaze seemingly had similarities with other recent fires worldwide.

"It appears that the external cladding has significantly contributed to the spread of fire," he said.

He said regulations for tall buildings were intended to prevent the spread of fire, so if it does occur, "the consequences are often catastrophic". 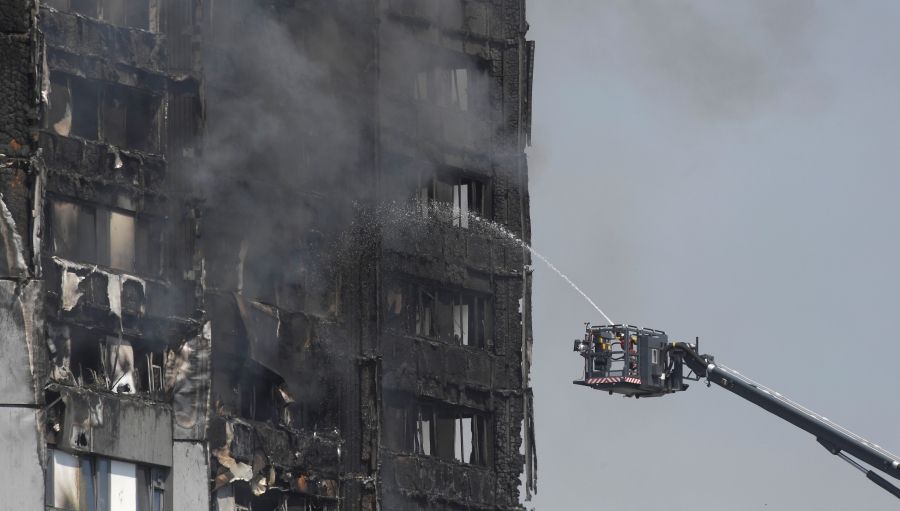