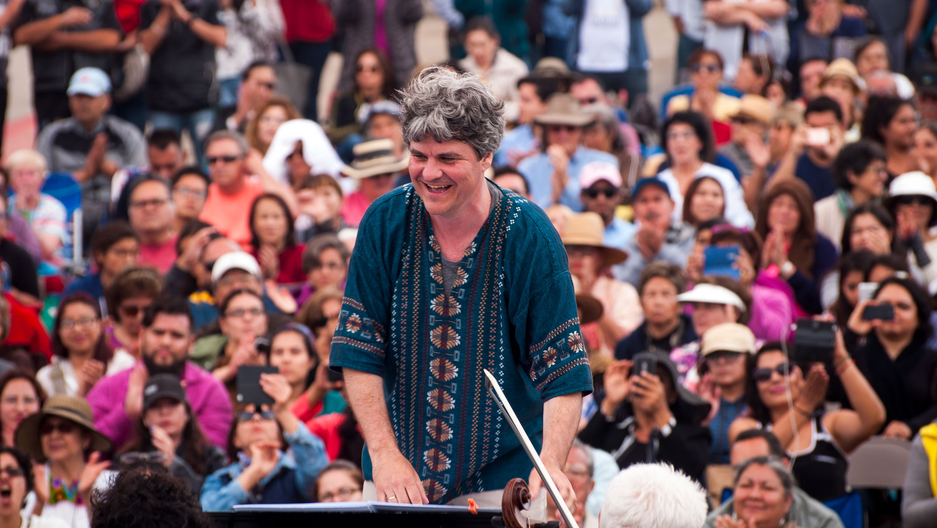 Markus Rindt, a German symphony conductor, toured Mexico with a concert called "Tear Down This Wall!" Rindt and his fellow musicians performed in Tijuana, Mexico, at the border fence. The original idea was to have musicians perform on both sides of fence, but that plan got complicated.

This week, marks 30 years since former President Ronald Reagan stood near the Berlin Wall and told Soviet Union leader Mikhail Gorbachev: “If you seek peace, if you seek prosperity for the Soviet Union and Eastern Europe ... Mr. Gorbachev, tear down this wall!”

This month, Markus Rindt, a German symphony conductor, brought that same message to the US-Mexico border. He organized a tour, called “Tear Down This Wall!” — after Reagan’s famous speech —and planned a performance on the California-Mexico border, where the fence divides Tijuana and San Diego.

“I read about this plan of President Trump’s to build a huge and beautiful wall,” said Rindt. “I thought we should do an action against this. Not only against this wall. You see around Europe increasing walls, higher and higher. It’s like mushrooms in the forest.”

Walls have marked Rindt’s life since he was a kid growing up in East Germany, during the Communist regime. He remembers seeing the Berlin Wall up close as a boy.

“My grandfather showed me the wall quite often,” he said. “I remember that already as a child I started to invent possibilities to flee.”

In 1989, in his 20s, Rindt left his home in East Germany and managed to get into West Germany through Prague. Just months later, in 1989, the Berlin Wall fell.

Today, Rindt, 49, has a boyish face, shaggy black and white hair, and directs the Dresdner Sinfoniker. It’s not your typical symphony orchestra. They play everything from classical and jazz to Frank Zappa and Santana.

Rindt’s idea in Mexico was to gather musicians on both sides of the fence, along rusty steel beams that run out into the ocean.

“We got an email saying that we don’t have permission to perform on the beach, on the American side, the US side,” said Rindt.

No go, said US officials. Too political.

In a statement to the media, Border Patrol officials said it “does not allow the federal enforcement zone to be used as a stage for an event based on a political message.”

Rindt was disappointed, but not surprised. His orchestra has organized protest concerts before. So they performed on the Mexico side only. They invited other groups too, including a Mexican punk band called Tijuana No! They played a version of “Spanish Bombs” by The Clash.

Rindt’s ensemble also turned the metal fence into an instrument.

On the US side, a small group of Trump supporters shouted “USA! USA!” and held signs that read “Build the Wall!”

Rindt said he didn’t mind. That’s their right. Plus he thought back to when he was a kid in East Germany, walking with his grandfather and seeing the wall there. There were many ways to cross, he thought.

“I invented digging holes,” he said. “I invented flying with a balloon over it. Or to disguise as a deer and jump over it.”

Or, in this case, playing music heard on both sides, no matter which side you were on.