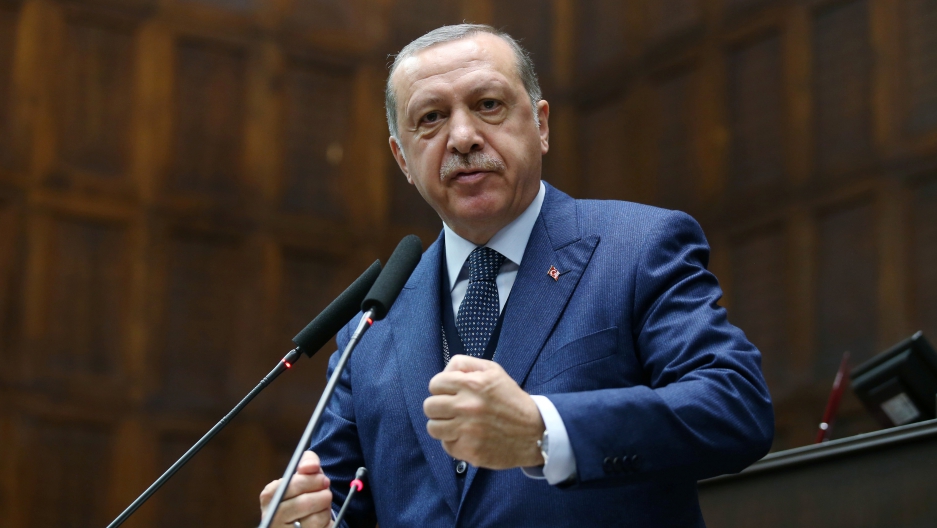 Turkish President Tayyip Erdogan addresses members of parliament from his ruling AK Party (AKP) during a meeting at the Turkish parliament in Ankara, Turkey, June 13, 2017.

Sitting in a Greek cafe, fugitive Turkish journalist Cevheri Guven explains why he severed links with his homeland "with a knife" after a post-coup crackdown by President Recep Tayyip Erdogan.

"People must understand, there is no justice in Turkey," says Guven, formerly the editor-in-chief of the magazine Nocta.

"Erdogan is a dictator. Anyone who is against him, even if acquitted in court, will face a new trial before they are even released from prison. You can't get away," he tells AFP.

A supporter of cleric Fethullah Gulen, who is blamed by Erdogan for an abortive coup against him last July, Guven fled to Greece in 2015 with his wife and two children after on-and-off stints in police custody.

His magazine, critical of the Ankara government, had already been hit with a flurry of state lawsuits — first on economic grounds, then on charges of extremism.

Guven paid 15,000 euros ($17,000) to smugglers who led him and his family across the river Evros into northeastern Greece.

It is the same land route followed for years by Kurdish guerrillas, and now refugees from Syria and other war-torn and poverty-stricken countries into the European Union.

But because Turks are deemed to be wealthier, the price charged by smugglers is far higher, explains Guven, who faces a 22.5-year prison sentence if he goes back.

"For Syrians generally the price is 250 euros. For Erdogan opponents it's 5,000 euros per person," he says.

"But the smugglers gave us a discount, my eight-year-old daughter and my five-year-old son counted as one," the 38-year-old adds.

Over 100,000 people have been sacked or suspended from the public sector in Turkey for suspected links to the Gulen movement under a state of emergency imposed a few days after the foiled putsch, and renewed three times.

Over 50,000 judges, police officers, civil servants and journalists have been arrested.

Gulen, who has lived in self-imposed exile in Pennsylvania since 1999, denies the charges. Some 400 Turkish citizens have requested asylum in Greece since July. Others have sought refuge in Germany, Britain, Spain and Portugal.

Some support Gulen but there are others, more affluent members of the secular Turkish elite who are worried by what they see as a hard turn to Islamization spearheaded by Erdogan.

For the latter, an additional draw is that Greece offers a five-year visa to anyone spending over 250,000 euros on buying a house.

"There is enormous interest in the Greek property market," says Michalis Katsaros, a real estate agent active in the north of the country.

Ironically, many choose to relocate to the Athens suburb of Palio Faliro, home to thousands of ethnic Greeks kicked out of Istanbul in the 1960s during a Greek-Turkish crisis over Cyprus.

"They welcome and help us, it's like finding old acquaintances," says an exile from Turkey who declined to be named.

"Europe must prepare itself to receive Turkish refugees," says another.

Before fleeing Turkey illegally, Guven says he and his wife spent nearly two months apart, hiding in separate cities and fearful of being caught due to widespread talk of torture in police cells.

He is among very few Turks who agreed to speak publicly on the issue. Others approached by AFP declined to be named, fearing for the fate of family members back in Turkey.

And even though there are around 40 families of fellow exiles now near him, Guven is wary of keeping contact with them.

'Can never be sure'

"You can never be sure. We fear Erdogan may send someone who seems to be one of us to find us. So we don't trust each other," he says.

Guven said he picked Greece as the "only democratic country on (Turkey's) borders."

In contrast, fellow EU member Bulgaria "sends back all political refugees," he says.

But among the community of exiles, there is now concern after a number of alleged illegal deportations — known as refoulement — of Turkish asylum seekers from Greece.

The Hellenic League for Human Rights said another Nocta journalist, managing editor Murat Capan, had been immediately imprisoned by Turkey after being sent back on May 24.

The league said Capan and other Turkish asylum seekers had been handed over by Greek police to "masked gunmen" who bound their hands, put them on an inflatable boat and abandoned them on the Turkish side of Evros river, near a Turkish army outpost.

Guven, who spoke to his colleague's family, confirms the story.

"Essentially they sent him back. We are not sure if it was done by police because those who did it wore masks," he says.

The Greek government, who recently angered Ankara by refusing to return eight Turkish officers sought in relation to the coup, officially denied involvement.