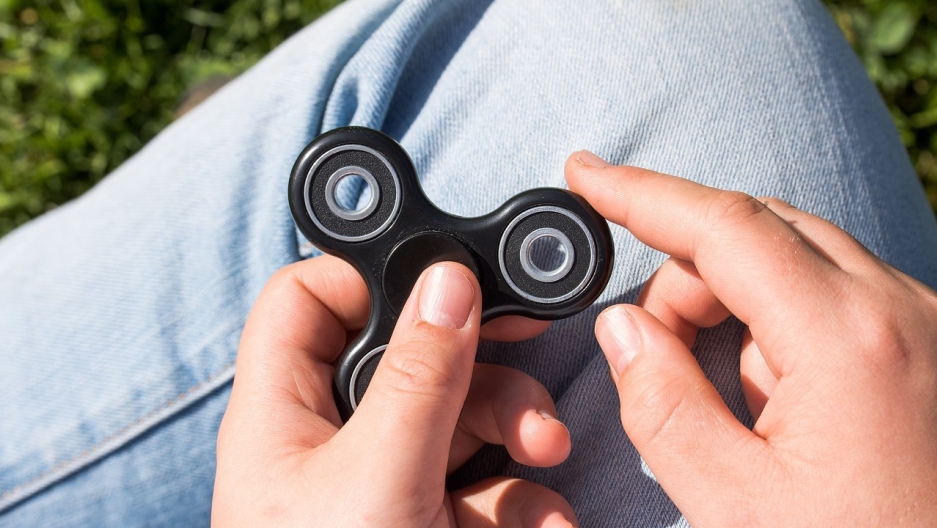 A fidget spinner is shown.

Have you gotten your hands on a fidget spinner yet?

The brightly colored device can be spun, flipped and even tossed in one hand, and it’s been turning up in schools across the country.

Manufacturers say the fidget spinners can help relieve stress, but the toys have already been banned as distractions in some classrooms, sending kids back to the Stone Age of clicking pens and squeezing stress balls.

Katherine Isbister, a game- and human-computer-interaction researcher at the University of California, Santa Cruz, says there’s a reason we fidget: It’s a “kinesthetic, tactile” activity that can help us think.

“There’s research, actually, that moving your hands around can help your brain perform a little better,” she says. “So, it’s something everyone does, and it’s really not necessarily a problem, provided that it doesn’t get distracting, of course.”

Isbister has studied fidget objects for years and recently wrote an article for The Conversation about how the toys can help some people stay focused. She sees a different problem with the new fidget spinners, however: They take too much focus.

“Some fidgets are the kind of thing you can just keep quietly in your own hand,” she says. “So, you think about something like a stress ball, or a worry stone, or there was a recent craze for this putty that all the kids had. And those things you can use without having to look at them.”

Isbister herself is working on the next generation of devices: “smart fidgets” that can help us learn more about our fidgeting habits. She explains that after one of her students, Mike Karlesky, became interested in why people fidgeted as they worked, “we realized that most computer devices have taken a lot of the nice, fidgetable qualities out of how they’re designed.”

“So, we’re actually trying to make smart fidgets,” she says, “to build back those interesting kinesthetic qualities into objects that you fidget with, but that also can, for example, capture traces of how you’re fidgeting — to help you keep track a little better of when you fidget.”

And, as researchers learn more about the science behind fidgeting, keep an eye out for more fidget toys in classrooms — hopefully, ones that lend more focus than they take.

“I think as people have started to understand better the link between good thinking and body movement,” Isbister says, “it’s become much more sensible and common sense, even among teachers in elementary schools, that kids do need to move around a little bit to think well.”

This article is based on an interview that aired on PRI's Science Friday. And, how do you fidget?