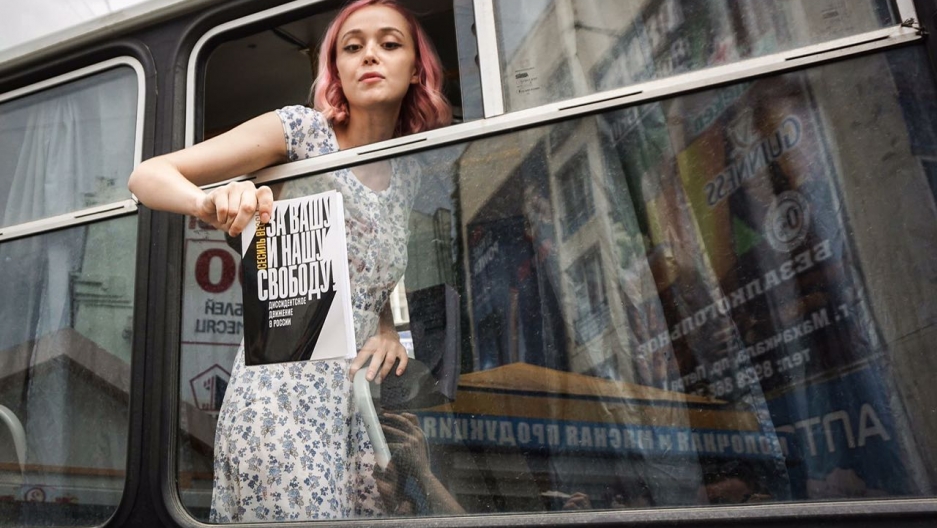 As tens of thousands of Russians took to the streets Monday to protest the government, Russian young women were front and center.

One of them, 21-year-old Olga Tochenaya, is no stranger to violent resistance. She’s been shoved, jailed and threatened with a machine gun. The young feminist is deeply opposed to President Vladimir Putin, who has been Russia’s leader for 17 of her 21 years. She’s willing to risk her university education and her freedom to oppose him.

"Putin and his supporters prefer corruption and injustice,” she said. “[Alexei] Navalny fights corruption, and is hope for the future of my country. I will go to all Navalny's rallies.”

Tochenaya spoke about her participation in the protests during a recent interview. She was later detained in the latest protests, and her status is unknown.

This is a challenging time for opposition youth all across Russia, from Moscow to Siberia to the Northern Caucasus. Less than a year before the presidential election, the Kremlin has launched a crackdown on anyone supporting Alexei Navalny, the opposition’s key leader and the main opponent for President Vladimir Putin.

Activists, including school and university students, and their families, receive threats. Police search their homes and offices, and dozens have been arrested for taking part in street rallies.

Many Russian women blend their calls for justice with a push for feminism, and a demand to stop violence against women. They see themselves as part of a long line of Russian women activists.

“Since the 1990s, we have seen courageous women in Russia’s civil groups and journalism, who choose to [take a] risk and make a difference because they are free people and want to live in a free Russia,” said Tatiana Lokshina, Russian program director of Human Rights Watch.

Some of these women fell victim to assassinations. Prominent journalist Anna Politkovskaya and internationally recognized human rights defender Natalia Estemirova were both shot dead. Russia is still waiting to hear who ordered their murders.

For Tochenaya, joining the struggle for human rights is based on a simple motivation: “I want to put an end to injustice,” she said.

A few weeks ago, Tochenaya helped a university friend who was being beaten escape her family and find a shelter. But soon after Tochenaya helped her friend flee Dagestan, the friend’s relatives showed up at Tochenaya’s door with several armed men, yelling that she would pay for violating “the laws of the mountains.”

She told them that the only law she knew was the law of the Russian Federation. She did not open the door.

“Most women of Dagestan suffer from domestic violence, and some fall victims to ‘honor killings’; I am glad that Tochenaya has courage to defend women’s rights,” Svetlana Anokhina, editor of online women's magazine Daptar, told me on the phone. “Instead of getting arrested at street protests, I would advise her to devote all her energy to very concrete field of human rights activity.”

On March 26, Tochenaya joined an unsanctioned rally with a few dozen opposition activists. In less than an hour, police detained at least half of the protesters.

“First police grabbed the organizer of our rally. People seemed lost without him, so I unrolled my banner, that said: ‘A thief in running shoes should be locked in prison,’” Tochenaya told me in a recent interview.

“I am not a great public speaker, but I still spoke as well as I could about human rights abuse, domestic violence and corruption issues in our country,” she said.

Tochenaya believes there should be legal solutions to violations of human rights, but sometimes law enforcement agencies help the abusers, especially in Dagestan, where young women often suffer.

Monday's protests were widely anticipated. More than 200 cities were expecting protests. Tochenaya, who visited Moscow in advance of the protests and met with Navalny, the opposition leader, said she wasn't worried about another arrest.

“I am much more concerned about Russia’s future," she said.