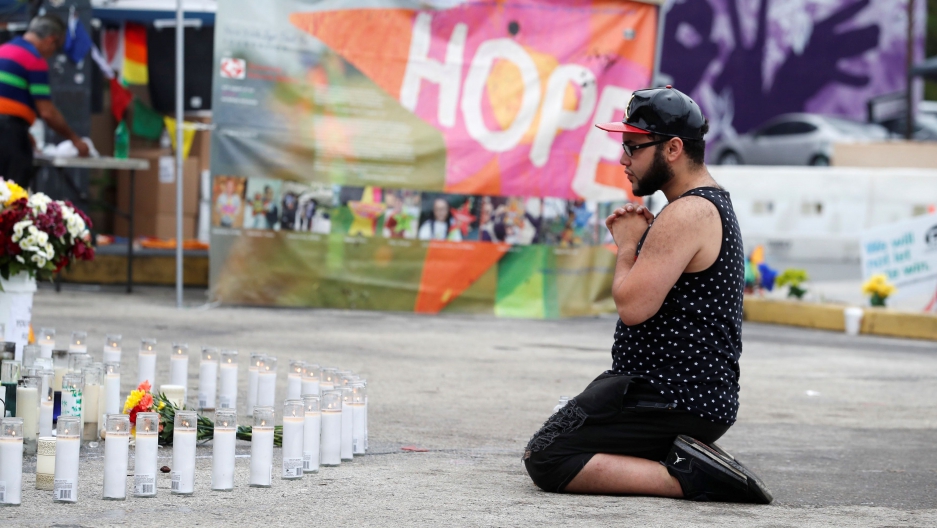 Jose Ramirez, a survivor of the Pulse nightclub shooting, reacts at the memorial outside the club on the one-year anniversary of the shooting, in Orlando, Florida, on June 12, 2017.

An Ikea sofa, paper wings, 49 wooden crosses — these are some of the gifts sent by well-wishers from around the world to remember the 49 people killed in Orlando's Pulse nightclub one year ago.

Thousands of the items will go on display — some in a museum, others online — on Monday, exactly one year after gunman Omar Mateen opened deadly fire inside the gay nightclub. In addition to those killed, 53 people were wounded in the hail of bullets.

Police shot and killed Mateen after a three-hour standoff. The shooter had pledged allegiance to the so-called Islamic State group just before the attack.

Candles, flowers, teddy bears and all kinds of handicrafts in memory of the victims quickly piled up outside Pulse, the hospital where survivors were treated and next to downtown Orlando's Lake Eola.

Two weeks later, city personnel carefully cataloged and removed the items, which showed little weather damage, though some had been splattered with candle wax.

"We collected thousands of items in the memorial fields," said Michael Perkins, head of the Orange County Regional History Center, in charge of curating the items.

Among the items was a baseball cap with the message "Love from the Czech Republic." One anonymous woman who said she had just returned from the Vatican dropped off a rosary.

Other offerings included a rag-doll bunny with the message "Keep dancing," a wooden box with 49 paper hearts inside and piles of cards, flowers and sequins.

The white Ikea sofa is a centerpiece of the collection. An unknown person dropped the sofa off outside the nightclub soon after the shooting, and it was quickly covered with handprints and written messages of love, pain and loss.

"Each item needed to be clean, to be addressed in some way," Perkins said. "Paper items needed to be flattened."

Candle wax covered many items, and curators removed it "the best we could."

In the History Center, Perkins opens a climate-controlled chamber. He pulls out a pair of paper boxes and shows several offerings, most of them in the colors of the Gay Pride rainbow flag.

"We don't know the stories behind most of these artifacts," Perkins said.

The collection is vast, and only a few hundred items will go on display in the "One Orlando Collection" at the History Center. Pictures of the other items will be posted at www.OneOrlandoCollection.com, when the site goes online on Monday.

The website is available in English and Spanish, since many of the victims were Spanish-speaking.

The website includes biographies of each victim and pictures of cards and offerings left especially for that person.

Perkins is hoping that people who dropped off the items will share their stories.

Since the tragedy, Orlando officials have focused their memorials on the community outpouring of love and unity after the shooting.

"The part of history that we want to be sure is told, is the community response," said Orange County Mayor Teresa Jacobs.

But how can a website that brings back such painful memories help community members and survivors heal?

When a loved one is lost, "you have a certain amount of time you need before you can re-engage with memories," Jacobs said.

"It's been one year, and we want the families that have lost a loved one and the survivors who went through this experience — at their own pace, when they're ready — to be able to take in not just the bad that happened, but to understand that their loved ones mattered enormously."

This idea can be seen across the city, from the banners that read "Orlando United" hanging from lampposts, to the ubiquitous LGBT flags downtown, to the fabric painted in rainbow colors draped over the Pulse nightclub fence.

This Florida city of 260,000 is known for its vast Disney and Universal Studios amusement parks, but it is also widely considered one of the most gay-friendly cities in the United States.

The items collected and restored over the past year make people "talk a little bit less of the tragedy ... and more about the response that it had in the community," said Yasmin Flasterstein, who heads an Orlando counseling group that helps Pulse massacre survivors.

"It's important to document that history of this time. Not necessarily what happened last June 12th, but what happened after that was really something beautiful," Flasterstein said.

Listen above to reporter Crystal Chavez from station WMFE in Orlando tell host Carol Hills how the anniversary of the attack is being commemorated.