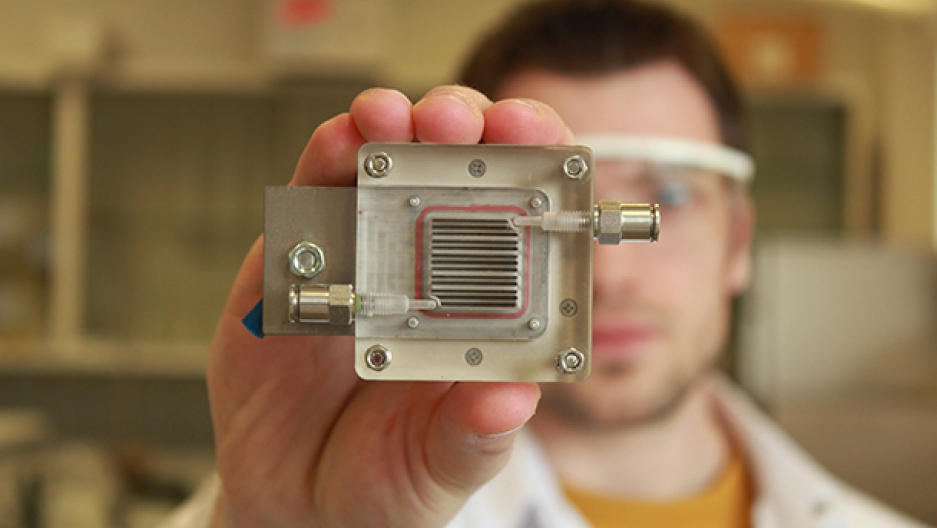 The photoelectrochemical (PEC) cell currently has an active area of only about 1 square centimeter. Sammy Verbruggen and his colleagues are working on scaling up the device.

A team of Belgian researchers has developed a device that will remove pollutants from the air and convert them into simple hydrogen — using sunlight, nanoparticles and a photoelectric chemical membrane.

The project was conceived and developed by two sets of researchers working on related issues, says the University of Antwerp's Sammy Verbruggen. Verbruggen’s group, based in Antwerp, has been working on air purification using light. They have developed special types of nanomaterials called photocatalysts, which are activated by light and can convert air pollution into less toxic compounds.

A second group, based at the University of Leuven and led by professor Johan Martus, is working with photoelectrochemical cells: membranes that convert water into hydrogen gas that can be used to generate energy.

The new device tries to combine both processes to convert not water, but polluted air into hydrogen, Verbruggen says.

“Ideally, everything that passes through the light side of the device gets oxidized to CO2,” Verbruggen explains. “To give you a straightforward example, let's say we start from methane — that’s one carbon atom and four hydrogen atoms. In the most ideal case, it will end up as one CO2 molecule on one side and two hydrogen gas molecules on the other side. That’s, chemically, a very clean reaction. Obviously, efficiencies aren't 100 percent as the device is proposed right now, but that's something we are working on.”

The study used “quite simple, small, organic molecules,” like methanal, acetic acid and ethanol, which can be “quite hazardous to your health,” Verbruggen explains. Methanal, which is also called formaldehyde, is a known indoor air pollutant that can cause headaches and other physical ailments, including cancer. Acetaldehyde is “the stuff in your brain that gives you a hangover,” Verbruggen says.

The tiny prototype device shows promise, but to make an impact it needs to be vastly scaled up, and this presents a huge challenge, says Verbruggen.

“I think we're facing two major issues that have to be resolved to get it to a breakthrough level,” he says. “One is to increase the efficiency. These materials that we are using are activated by UV light right now. If you have a look at the solar spectrum, the contribution of UV light is, at most, 5 percent of the total spectrum.”

One avenue is to modify their materials so they can use visible light. Another would be to try to upscale the current design. The first test worked with a membrane with an active area of about 1 square centimeter. Compared to other solar-driven technologies like rooftop solar panels, that isn’t much, Verbruggen says.

Even if they do successfully scale up their device, having an impact on a large polluted area may still prove difficult.

“I think it's a little utopian to think we can clean up an entire city. That's maybe a little far-fetched,” Verbruggen says. “But I think it might come in handy in conjunction with a very specific industrial process, for instance. I can imagine if you're in the paint industry or in textiles, that there are some processes involving a lot of organic solvents. They have waste streams loaded with organic molecules, and they will have to meet some environmental quota. They can't just put it in the air — or, I hope they don't just put it in the air.”

“So, if they could use a technology like this one, they can hit two flies at once: They can purify the air, on one hand, and on the other hand, they can recover part of the energy that is stored in this polluted air as hydrogen gas, for instance,” Verbruggen says.