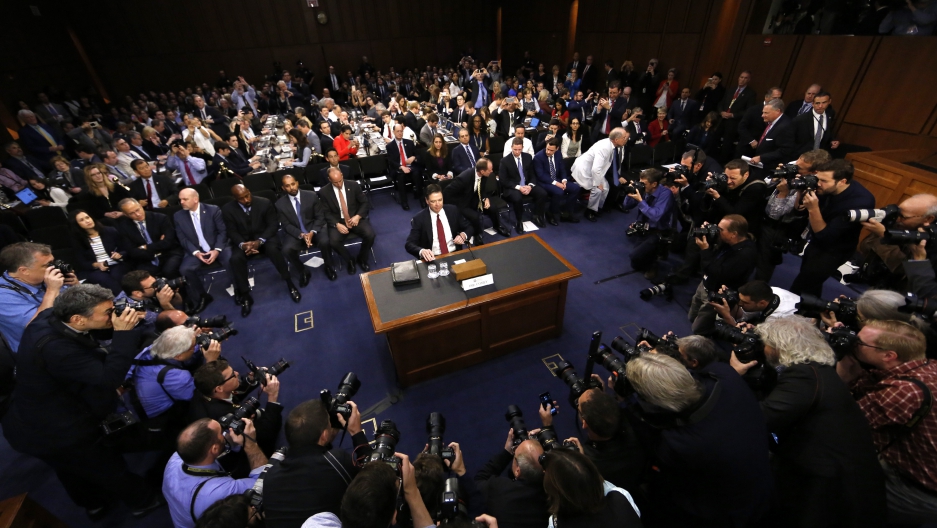 Former FBI Director James Comey prepares to testify before a Senate Intelligence Committee hearing on "Russian Federation Efforts to Interfere in the 2016 US Elections" on Capitol Hill in Washington, June 8, 2017.

Images of female members of parliament winning a historic number of seats in the British elections Thursday stood in stark contrast to the mostly male images coming out of Washington, DC, this week.

To be sure, both places are still far from the gender equality that exists in many Scandinavian countries and some African countries, where women are half or more of MPs.

The countries Trump mostly focuses on — Russia, China and Saudi Arabia — are also overwhelmingly male dominated. He’s snubbed leaders of France and Canada, which have 50 percent female cabinets and German Chancellor Angela Merkel — herself, of course, a woman.

British commentators will no doubt herald this historic political moment as one more example of their superiority over the US. And research is behind them. There are considerable dangers to mostly or all-male power circles, as well as homogenous ones that lack diversity, research shows. Corruption is much more likely. So is violence and conflict at the state level.

It’s not that women are, by nature, more peaceful and honest (there’s research that they are, but that’s disputed). What’s not disputed is that teams with both men and women do tend to be less corrupt and violent than ones without many women at all.

Police departments are a great example — as data shows that women officers pull their weapon out less and are sued for abuse less. Still, women make up fewer than 13 percent of police officers in the US — they’re closer to 30 percent in the UK.

US women did have a presence at the Comey trials. Katherine Kidder, a fellow at the Center for a New American Security, pointed out that “some of the more revealing lines of questioning came from women — Sen. Dianne Feinstein pushing back on why Comey didn’t call out the president in the moment and Sen. Kamala Harris asking the 'negative space' questions, giving rise to a line of questioning for the classified hearings."

Sen. Susan Collins' line of questioning opened the conversation about the way in which Comey passed along the presence of the memos. “It lends credence to the literature that demonstrates how female legislators operate differently — and more effectively,” Kidder says.

Obama appointed a record number of females into senior national security and foreign policy positions. But Heather Hurlburt at New America makes the point that these weren’t structural changes — and now Trump’s reversing them and creating a more masculine culture.

It affects how we talk about ourselves. “I personally was really struck by what a 1950s male-gendered version of 'honesty and decency' Comey presented yesterday. Hard to imagine how a woman could have struck that note,” Hurlburt observed.

The absence of women’s input in a major government decision that impacts them is real — as was seen in the health care debate, and in the fact that Trump has slashed tens of millions in funding for women's programming in his first 100 days. This reporter studied the media coverage and found that “chicken” was mentioned more often than “women” in news reports.

In the coming months, we'll see what the new female MPs do in Britain and what lessons, if any, will be learned. Whether or not they cross the pond remains to be seen.