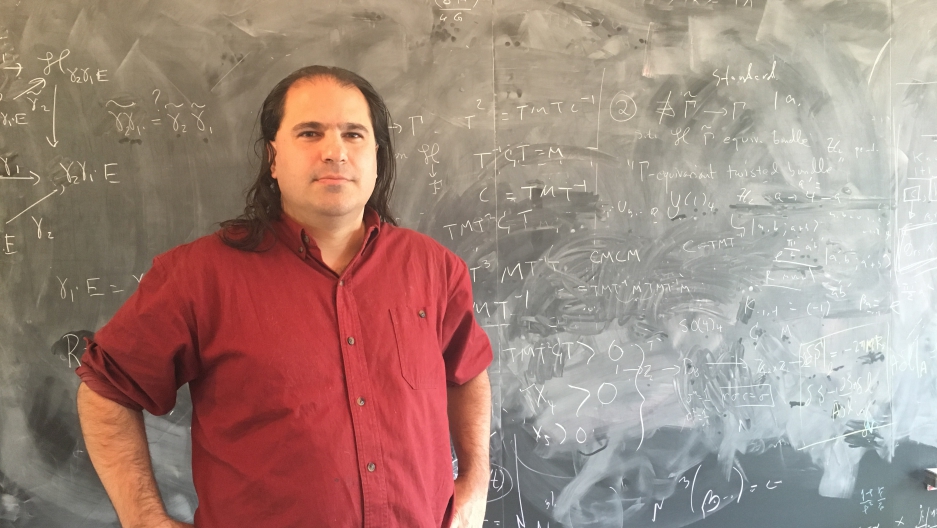 Nima Arkani-Hamed is pictured in his office.

The cult classic is constantly on in the background as Arkani-Hamed works on physics problems at the Institute for Advanced Study in New Jersey.

In "Twin Peaks," a town is trying to solve a murder. In his Princeton office, Arkani-Hamed is trying to answer some of the fundamental questions occupying 21st-century physicists.

“What is space and time really? Why is the universe really big?” Arkani-Hamed asks. “And on top of that, we don’t understand why there are big things in it.”

And he’s made a name for himself in seeking answers: At just 45, Arkani-Hamed has already spent time at Berkeley, Stanford and Harvard and won a prestigious $3 million physics prize.

Part of a family that zigzagged the globe in pursuit, and defense, of science, Arkani-Hamed always knew he would pursue his career in the United States.

“It was obvious that the place in the world where you go and freely think as big as you wanted and all that mattered was the quality of your ideas and your ambition, it was completely obvious that it was America more than anyone else,” says Arkani-Hamed.

A circular journey back to the US

For decades, the US has drawn some of the world's best scientists. Albert Einstein fled the Nazis in 1933 and landed at the same institution where Arkani-Hamed now works. American universities, and the country’s reputation as a place for freethinkers serve as an especially strong pull for academics seeking refuge from oppressive governments.

Like generations of scientists before them, the United States was a draw for Arkani-Hamed’s parents, Hamideh Alasti and Jafar Arkani-Hamed, who came to the US from Iran to pursue their own careers in physics at the Massachusetts Institute of Technology and NASA.

Arkani-Hamed was born in Texas while his dad was working on one of the Apollo missions. Shortly after the Iranian revolution in 1979, when Nima was 7, Jafar and Hamideh gave up their postings in the US to move back to Iran. They hoped to help re-establish a strong tradition of science there.

“We were hoping that by going there, we will be able to make our universities more democratic,” says Jafar Arkani-Hamed.

After about a year, Ayatollah Khomeini moved to close those universities and Jafar Arkani-Hamed spoke up about the damage that would do to science in the country.

“Many of the professors, we wrote a very open letter to the nation that by doing that, you are destroying science in Iran,” Jafar Arkani-Hamed said. “And because of that, they came after us.”

To avoid jail or even death, this time, the family had to flee for science. They made for the Turkish border.

“It was a pretty complicated adventure, with many villains and a few fantastic heroes,” says Nima Arkani-Hamed.

They had to ride horseback over rugged mountains at night and hide in caves during the day. Nima and his younger sister got sick.

“It was horrifying,” remembers Hamideh Alasti. “I thought, I’m going to lose the kids one by one.”

One night, Nima was too weak from a fever and dehydration to sit on his own horse, so Hamideh pulled him onto hers.

“Suddenly, I saw it was a bright sky, and then I showed him the Milky Way," says Hamideh. “His eyes opened up and he started talking about the Milky Way to me, and then asking physics questions. So I brought him back to — in a way — life.” 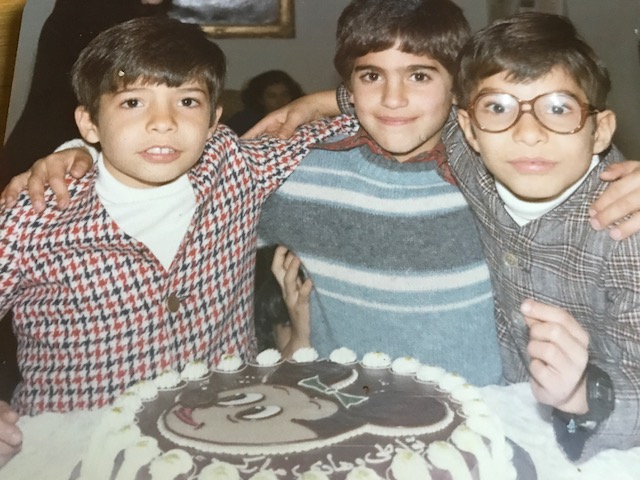 As Hamideh Alasti sees it, her son’s curiosity saved his life.

After more than a week in flight, the family reached Turkey safely. They immigrated to Toronto, where Nima kept asking physics questions and excelled at math and science.

But he always wanted to complete the circle his family had begun and make it back to the US. After college, he moved from Canada to work on his PhD at the University of California, Berkeley.

US ceding leadership on science

It was inevitable, he says, that he would land back in the US, the country of his birth and the country he always saw as the best place to think big when it comes to science.

But now, he says he's no longer so certain the US is the global center of science.

"That leadership is getting gradually ceded," says Arkani-Hamed.

Recent political developments, like President Trump backing the US out of the Paris climate agreement and proposing cuts to science funding are a small part of it. But Arkani-Hamed thinks the larger issue predates this administration. He thinks people in the US have stopped dreaming big.

“We have been ambivalent in committing to taking the next big obvious steps in pushing forward our understanding of the fundamental laws of nature experimentally, and that’s something that we led in for half a century,” he says.

Arkani-Hamed points to particle physics. The US abandoned work on a game-changing supercollider in the early '90s, partly due to funding. Europe, with the construction of the Large Hadron Collider near Geneva, became the epicenter of that field.

Now, Arkani-Hamed is involved in an effort to build a next-generation particle collider to untangle the newest paradoxes in physics.

But that project is not in the US, where Arkani-Hamed doesn’t believe there’s the money or will to build it.