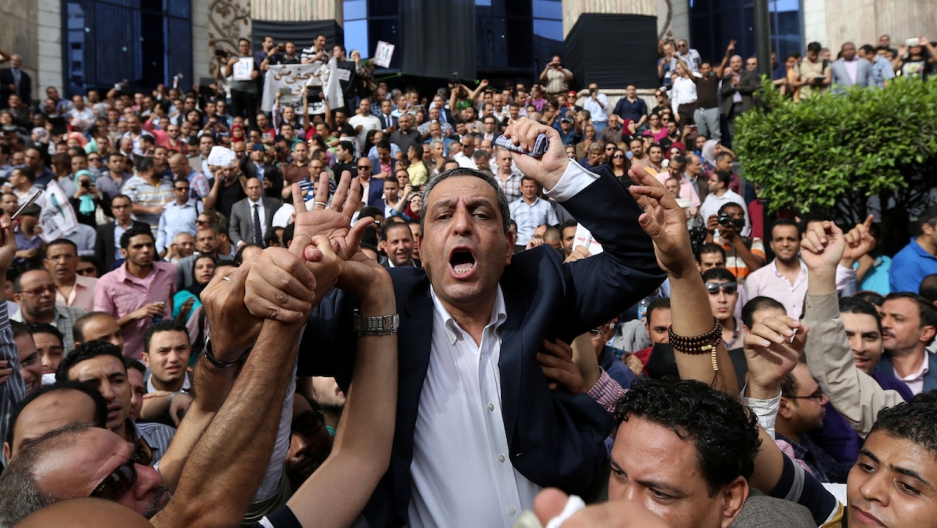 Journalists carry Yehia Kalash, head of the Egyptian Press Syndicate, during a protest outside EPS headquarters in downtown Cairo against restrictions on the press and to demand the release of detained journalists, on May 4, 2016.

The alert came in the form of a simple, late-night tweet by a prominent human rights activist.

“Looks like we've just been blocked in Egypt @MadaMasr,” wrote Egyptian activist Hossam Bahgat, a Mada Masr contributor, on May 24.

The tweet was one of the first signs of a brazen new assault on press freedoms in Egypt. It would soon become apparent that authorities had blocked access to at least 21 news websites earlier that day, including Al Jazeera, The Huffington Post Arabic and Egypt’s most credible independent news source, Mada Masr.

That same evening the official state news agency, MENA, said that the government had ordered internet service providers to block the sites because they supported terrorism or spread “false news.”

A complete official list of censored websites was not provided, though it was clear which sites were inaccessible. By May 28, the number of blocked news sites appeared to have increased to as many as 24.

Observers say the move is part of a wider intensification in Egypt’s crackdown on media and dissenting voices as its president, Abdul Fattah el-Sisi, looks to consolidate power ahead of next year’s presidential elections.

In recent weeks, there has also been a wave of arrests targeting opposition politicians and activists. Prominent human rights lawyer Khaled Ali, a potential presidential candidate, was also arrested and is now being tried for "committing public indecency." Ali had previously prevailed against the Sisi regime in a separate court case, stopping the government from transferring control of two Red Sea islands to its ally Saudi Arabia.

On May 29, Sisi also ratified a controversial NGO law, which rights groups say will criminalize their work and make it difficult for them to operate. Prior to this, Sisi expanded his control of the courts after he ratified a new law allowing him to make top judicial appointments at the end of April. This move is widely seen as an attempt to stop the promotion of two judges who have rebelled against the regime in court.

The Committee to Protect Journalists condemned the government’s website blocks and called on the government to “immediately” restore access. While media censorship in Egypt has been high for several years now, CPJ says online censorship has been rare.

There was speculation that some internet service providers partially lifted the block days later, as some readers said they were able to access some of the banned sites. In a statement on May 29, Mada Masr confirmed that they were still blocked, but not entirely. It said of their site: “accessibility varies for users on the same service providers and is still completely blocked on others.”

“So far, no official reason has been given to us,” said Lina Attalah, editor-in-chief of Mada Masr, which is known for its investigative journalism and critical coverage of the government.

Attalah said the service freeze has been “paralyzing,” but Mada Masr is still publishing stories on social media for those who can’t access their website. She praised her colleagues for being “a brave team of reporters who defend meaningful journalism and who won’t settle for less.”

Michele Dunne, a senior associate at the Carnegie Endowment for International Peace, said the news block “is an unprecedented level of attack on internet freedom and an attempt to close off the few remaining outlets through which Egyptians could get a point of view other than that of the government.”

“It’s a sign of weakness rather than strength,” Dunne added. In her view, it’s evidence that Sisi is feeling insecure. The president’s popularity has been flagging amid high inflation and unemployment. Four recent deadly ISIS attacks on Egypt’s Coptic Christian minority didn’t help public trust.

Press freedom has been battered under Sisi, who has presided over one of the most repressive regimes in Egyptian history. In Reporters Without Borders’ 2017 ranking of media freedom, Egypt is placed 161 out of 180 countries, slipping two places from 2016.

It now looks increasingly like the Egyptian government has used the crisis with Qatar to extend censorship in Egypt.

The Egyptian ban on news sites coincided with similar bans by its ally Saudi Arabia, the United Arab Emirates and Bahrain on Qatari-backed websites like Al Jazeera. (Egypt has long accused Qatar of affiliation with the now-outlawed Muslim Brotherhood).

This turned out to be a precursor to Monday’s major diplomatic rejection of Qatar, when all these same states announced they would also be cutting relations with Doha, accusing it of supporting terrorism.

Some of the local blocked websites have vowed to take legal action against the government.

“There is no predicting … how far the state can go to counter a line of critique,” said Aya Nader, an Egyptian freelance journalist. “I am worried I will get arrested for doing my job, or [get] banned from traveling. They have tabs on journalists, and you never know when they will strike.”