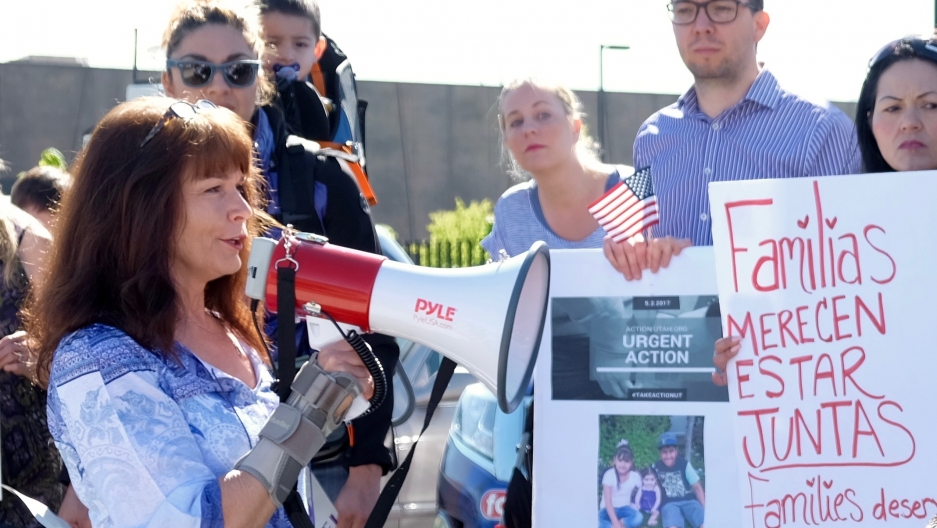 Sharlee Mullins Glenn speaks to demonstrators outside the Office of Homeland Security in West Valley City, Utah, in May.

Sharlee Mullins Glenn, a 56-year-old children’s book author, says she never imagined she would be standing outside a Homeland Security office in Utah with a bullhorn. But that’s exactly what she did in May.

Mullins Glenn is the founder of Mormon Women for Ethical Government, which started as a private Facebook group just days after Donald Trump’s inauguration. It began with a small group of women in Utah, upset over the president’s travel ban. Since then, it’s branched out to other issues, including the administration’s ramped-up policy on deportation.

At the demonstration in West Valley City, Mullins Glenn thanks people for coming out in support of Silvia Avelar-Flores, who was detained and jailed in April. Avelar-Flores, 31, was brought to the US from Mexico when she was a child; she grew up here, got married and had three children — all US citizens. She was apprehended by Immigration and Customs Enforcement officers in the parking lot of a local craft store with her 8-year-old daughter. They had been tracking her for a few days after she failed to appear at an immigration appointment. Avelar-Flores has said she did not know about the meeting.

Avelar-Flores may have stayed here in the US illegally, Mullins Glenn says, but she is not a criminal.

“That this woman be detained in front of her child, put in jail and slated for deportation, is unconscionable and flies in the face of the very values we hold most dear in this community," says Mullins Glenn.

“Everything about this offends my religious beliefs,” says MJ Munger, another member of Mormon Women for Ethical Government. “I am standing in solidarity with Silvia to try to protect a family to stay together. For me, that’s a core value beyond anything else —families need to be together.”

Munger says until recently, her political activism only went as far as volunteering at a food pantry.

“It’s probably obvious, I’m an introvert, I’m a shy person. My belief is what fills me with a fire to go past the shyness and to stand up,” she says.

A majority of American Mormons identify as political conservatives. According to a 2014 survey by the Pew Research Center, seven in 10 Mormons in the US are Republicans or lean toward the GOP. And Donald Trump carried Utah. But Angela Wentz Faulconer says over the past few months, she’s been rethinking her political allegiance.

Related: Some Utah Muslims feel let down by Mormon neighbors who voted for Trump

“I’ve kind of been switching,” Faulconer says. “I was more Republican, and then, I definitely moved towards the Democratic side. I feel like we need to be for common sense, and what has been happening ... this isn’t common sense.”

Some other Mormons apparently feel the same way. Mullins Glenn says the group she formed with a few friends in January has snowballed.

“Within a few days, we had nearly 300 members. Within a week, we had close to 3,000 members. By two weeks, we had 4,000 members,” says Mullins Glenn. And they’re now approaching 5,000 members, she explains, in most states and around the world. Despite the name, the group is not officially associated with the Church of Jesus Christ of Latter-day Saints, but Mullins Glenn says immigrants and refugees have become a driving priority for Mormons like her.

“We ourselves were refugees,” she says, referring to the history of Mormons in the US. “So, that’s an issue, I think, regardless of political persuasion touches our hearts.”

Related: One Utah group's response to immigration raids: Be prepared, be connected

That evening, she checks in on the family of a Mormon woman named Teresa Ramos, who was recently deported to Colombia. Ramos has an 18-year-old disabled son, Jeffrey Smithers, who she left behind. Smithers has cerebral palsy and epilepsy and suffers seizures two or three times a month, sometimes requiring hospitalization.

“After I have those seizures, I tend to forget everything for the past whole day,” Smithers says. “When I’m like that, I don’t recover until a day or two after that.” 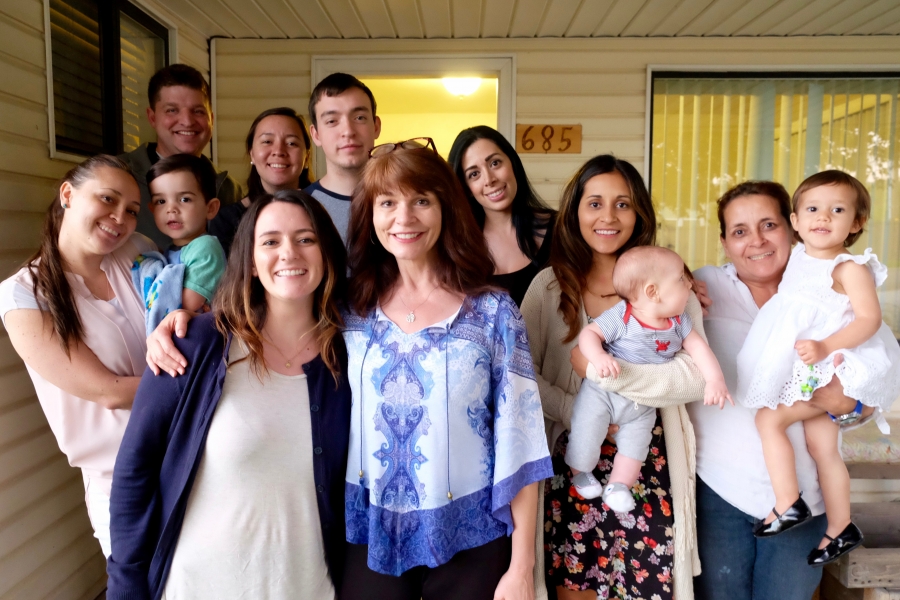 Sharlee Mullins Glenn, a founder of Mormon Women for Ethical Government, visits with the family of Teresa Ramos in Draper, Utah. Ramos was deported to Colombia in April.

Smithers is legally an adult but still needs help, especially now that his mother, who is a single parent, is gone. His cousin, Cali Dumas, says Smithers had a seizure the day after his mother was deported, and the family isn’t sure how to best care for him or what to do about health insurance.

“We’re trying to do everything that she did because she’s unable to do it now, and it’s a lot of pressure on our family,” Dumas says.

Mullins Glenn’s group got involved with the family just before Ramos was to be deported. They made last-minute calls to lawyers and to the office of Utah Senator Orrin Hatch, and they staged a demonstration at the airport, singing hymns and holding silent prayers.

“I’ll never forget how inspirational that was for our family to know that complete strangers were so invested in what was going on with us,” Dumas says.

When Mullins Glenn leaves, she promises the family that she’ll keep working to get Ramos returned to Utah.

The next day, Mullins Glenn gets news about Silvia Avelar-Flores, the woman arrested at the craft store parking lot. She’s been released from jail and will have a 90-day stay of removal.

Mullins Glenn and her group are working to make that stay permanent.

Andrea Smardon is host and producer of the podcast Changing Our Stories, on the changing lives of women since the election.