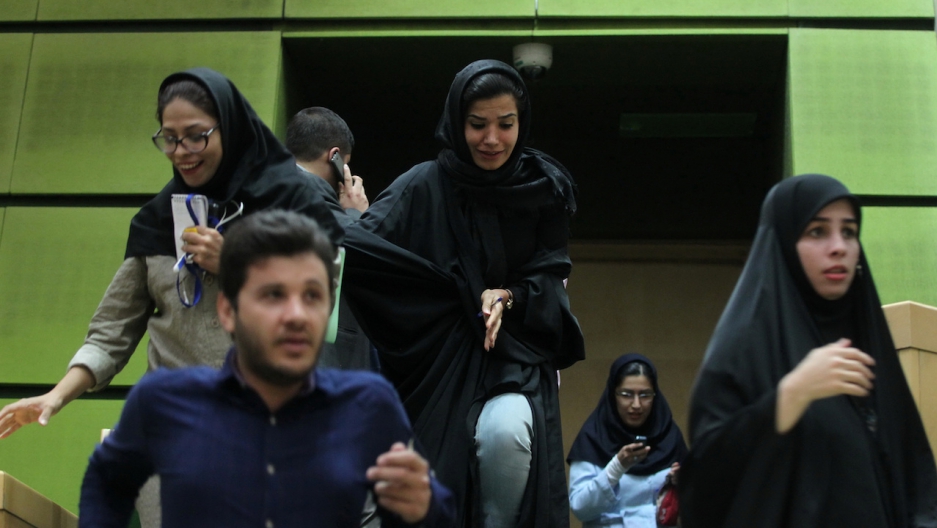 People are seen inside Iran's parliament during an attack in central Tehran on June 7, 2017.

Gunmen and bombers stunned Iran on Wednesday when they stormed parliament and the mausoleum of Ayatollah Ruhollah Khomeini, leaving 12 people dead in what appear to be the first ISIS attacks in the country.

After a string of ISIS-claimed attacks targeting Western countries, many are left wondering — why would the group suddenly target Iran?

The World reached out to William McCants, author of "The ISIS Apocalypse" and director of the Project on US Relations with the Islamic World at the Brookings Institution, to get some insight.

How do ISIS and its adherents view the Islamic Republic of Iran?

In the first instance, they see it as a religious competitor. Iran is dominated by [Shiite Muslims], one of the two major sects of Islam, and it's a sect that ISIS views as a rival. There is also a strategic competition, of course, with Iran for control in Iraq. ISIS has been fighting Iranian forces off and on since 2006, when it was founded. And it has long wanted to carry out an attack inside of Iran, but could not do so because al-Qaeda told it "no" in the early years. And once ISIS split from al-Qaeda, it may not have had the assets to do so.

Talk a little more about the religious rivalry. Isn't it true that in the mindset of ISIS, the Shiite [also called Shia] Muslims are not just rivals, but also apostates?

That's right. Sunni jihadists in general have a dim view of the Shia. They believe Shia leaders are apostates, there's a debate among jihadists as to whether the hoi polloi are apostates. For ISIS, they are certainly apostates — all of them. Ignorance of religion is no excuse, they would argue. Shia Muslims are all beyond the pale, and, in ISIS's view, worse than infidels like Jews and Christians, because these Shia, they argue, have made a choice to place themselves outside of true Islam, as they would see it.

ISIS is losing territory in Iraq and Syria, and even in its longtime stronghold of the Syrian city Raqqa. So, why would ISIS want to attack the regional power of Iran now?

On the face of it, it doesn't seem to make much sense. But there are a couple of reasons why. One is to, of course, punish Iran for its meddling in Iraq. Two, to force Iran to go all-in in Iraq, to commit even more forces and turn this into a major sectarian war. The thinking here being that, if this war is clearly divided along sectarian lines, ISIS would gain more support from the Sunni locals, who fear Iran. Another reason to carry out an attack like this would be to push the Iranian government into cracking down domestically on the Sunnis [inside Iran]. ISIS would hope in that instance that the crackdown would be wide-ranging and would create a lot of alienation among the Sunnis in Iran, and that they would then support ISIS's cause.

Another way to think about this is through the lens of recruitment and competition with al-Qaeda. ISIS used to be a part of al-Qaeda. They split in recent years. And they have been competing with one another for market share among global Sunni jihadists. ISIS has had trouble attracting recruits over the last year or so, because security has tightened and it's losing a lot of territory. So, it wants to retain momentum to show that it's still in the fight, and what better way to do that in the jihadist world than to carry out a strike in the heart of Iran, at two of its major symbols of power? In the same vein, this is part of a global series of attacks that have happened over the past few days, either inspired or directed by ISIS, that are also meant to show that the organization is still in the fight, can still recruit. It's the Muslim month of fasting, Ramadan. And during the same month last year, ISIS also carried out a high-profile series of attacks, probably toward the same end — to attract more recruits. So, while on the face of it, it doesn't look like a good idea to poke a bear like Iran, there can be other reasons to do it that are smart, at least from ISIS's perspective.

Is it your sense that ISIS had been trying to carry out an attack like this in Iran for some time?

We know from a series of internal ISIS and al-Qaeda documents that ISIS has wanted to carry out an attack in Iran for a long time. But its parent organization al-Qaeda discouraged it. That's because al-Qaeda has a logistics hub inside of Iran, and also has a number of people being held by the Iranian government. And al-Qaeda didn't want to lose either the hub or its people, so it said, "no." Once the two organizations split, then ISIS could of course pursue its designs to carry out an attack in Iran, but then it would have to build up its capability. ISIS has had a number of people — Sunnis from Iran — go fight for its organization in Iraq. And perhaps it's one of their members who carried out today's attack. We'll see about that.

So, after 2014, when ISIS split with al-Qaeda, it was probably a matter of lacking capability rather than any other reason why we haven't seen this kind of attack before.

What's significant about the two sites of today's attack in Tehran — at Iran's national parliament building, and the mausoleum of the Islamic Republic’s founder, Ayatollah Ruhollah Khomeini?

Well, the parliament is the heart, of course, of the Iranian government — its lawmaking body. And the shrine is the spiritual heart of Iran's revolutionary government. Khomeini was the founder of the republic, and some whispered that he was something even more, approaching messianic status. So this is an attack that went against both the heart of Iran's premier deliberative body, but also the spiritual heart of the revolution.

Last question, Will. What comes to mind in the aftermath of this attack when you think about what's at stake for the United States?

It's about demonstrating solidarity with any country that has been through an attack on innocent civilians. The US terrorist list is dominated by Sunni groups, but not exclusively. In the past, the US has designated groups [as terrorist organizations] that threatened Iran domestically that did not pose a threat to the US. I think it's important to uphold that principle.