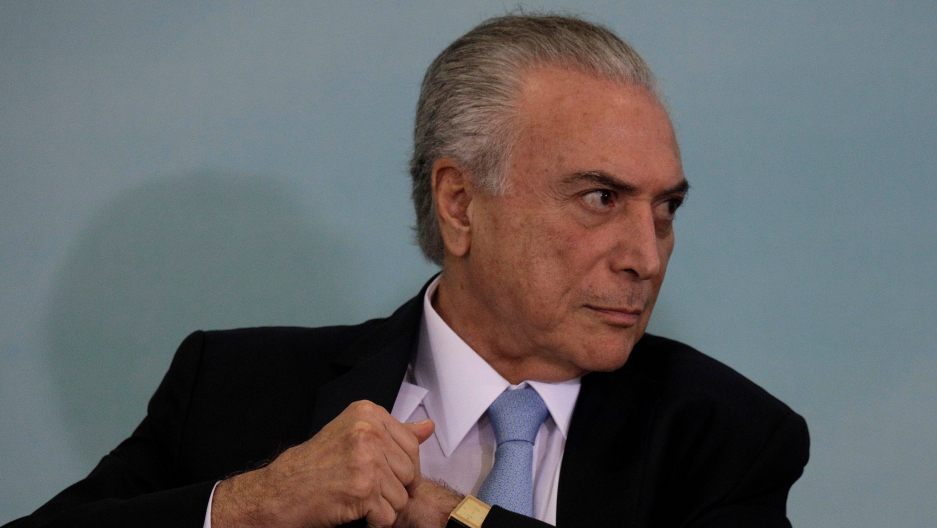 Brazil's President Michel Temer reacts during the ceremony of launching of the Agricultural and Livestock Plan 2017/2018, at the Planalto Palace in Brasilia, Brazil, on June 7, 2017.

President Michel Temer expressed confidence Wednesday that he will not be toppled by a growing corruption scandal as Brazil's election court debated whether to strip him of his mandate. The Supreme Electoral Tribunal (TSE) is examining whether the 2014 re-election of President Dilma Rousseff and her then-Vice President Temer should be invalidated because of corrupt campaign funding.

If the court votes to scrap the election result, Temer — who took over only last year when Rousseff was impeached — would himself risk losing his office, forcing Brazil's Congress to pick an interim president.

The seven judges on the panel had been expected to start voting during a session lasting all Wednesday morning, but debates over the complex case forced them to push back the schedule, with extra sessions planned for Thursday and possibly Friday and Saturday.

Temer — who faces a separate, potentially devastating probe at the Supreme Court into alleged obstruction of justice — said he was confident that he will ride out the turmoil and finish his term.

"We will lead the government until 31 December, 2018," the center-right leader told a gathering of agribusiness leaders at the presidential palace. "Do we have the right to be pessimistic about Brazil? Or should we be optimistic?"

Even if found guilty at the TSE, Temer would be able to appeal. A judge on the panel could also decide to adjourn the court hearings, a move that could drag the whole process on for weeks.

Temer's lawyer, Gustavo Guedes, said after the latest hearing that he was satisfied.

"The whole of Brazil is following this, looking for answers," he said. "The court has positioned itself very adequately in the opinion of President Michel Temer's defense."

Temer to be acquitted?

Analysts say that the initial reading of the court's deliberations makes acquittal more likely for Temer.

"Apparently, the most probable thing is that the president will escape, although that doesn't mean it's going to happen. In Brazil it's the most likely outcome," said Albert Almeida of the Analysis Institute.

The Eurasia Group issued a note saying that "there are growing signs President Michel Temer could well enjoy a majority on the court."

The first to cast a vote will be the lead justice on the case, Herman Benjamin. Although he is widely predicted to vote against Temer, the court's president Gilmar Mendes has made arguments indicating he will lean the other way.

Few analysts thought the TSE would convict Temer until recently, believing that it would allow him to complete his mandate instead. Brazil is still shaken by the trauma of Rousseff's impeachment last year, and Temer has argued repeatedly that he is needed to restore stability and see through austerity reforms meant to rebuild Brazil's sickly economy.

But Temer's political standing has been dramatically weakened by the revelation last month of secretly recorded audio in which he is allegedly heard approving payment of hush money from a meatpacking tycoon to a top politician jailed for corruption.

The opening of a probe into the alleged obstruction of justice fueled hopes among Temer's opponents that the TSE will seize the opportunity to bring him down — even if the election case is unrelated.

Although Temer could appeal a conviction by the electoral court, he would still face the ongoing parallel corruption probe and his grip on power may become untenable.

But the president could also be hurt if the court adjourns the case, leaving him ever more vulnerable to attacks on the corruption case, the Eurasia Group says.

It "may well determine Temer's fate," it said. "For if the court punts deliberations for weeks or even months, the president would be much more vulnerable to ongoing investigations by the prosecutor general's office."

Despite his troubles, Temer has so far retained a solid center-right coalition in Congress. That is partly because the legislature has no clear candidate to step into his shoes as an interim leader for the next year and a half.

But that coalition could crack at any time.

The key partner to Temer's PMDB party, the PSDB, has indicated that it is waiting to hear the results at the election court before deciding whether to withdraw support or stick by the president.

Without the PSDB, Temer's PMDB party would be highly unlikely to find the necessary support to enact controversial pension reform at the center of the president's austerity plans.