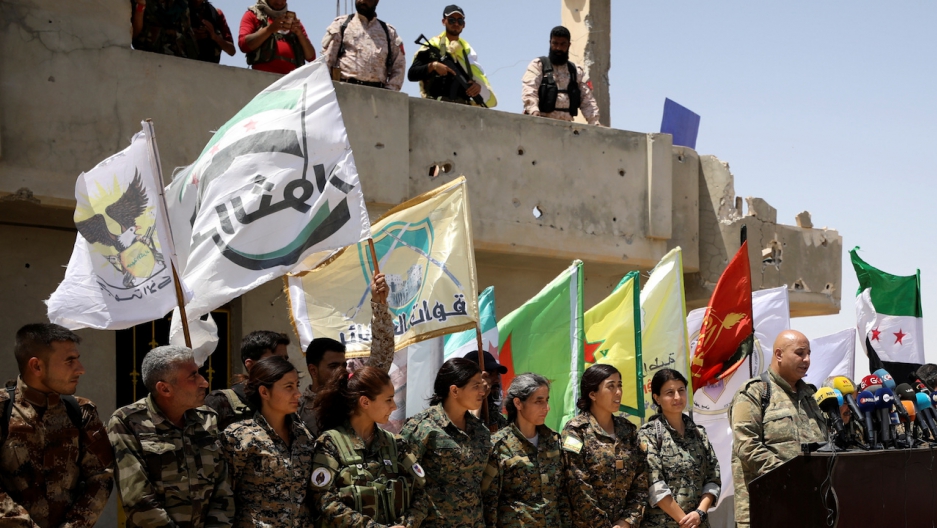 US-backed fighters broke into the city of Raqqa on Tuesday as they launched a final assault to drive ISIS from its de facto Syrian capital.

The attack on the northern city at the heart of the terror group's Syrian territory has been seven months in the making and is backed by air support, military advisers and weapons deliveries from the US-led coalition.

Seized by the jihadis in early 2014, Raqqa became notorious as a hub for ISIS's operations in Syria, Iraq and beyond.

The city has been the scene of some of the group's worst atrocities, including gruesome executions, public displays of dead bodies and the trafficking of women.

It was one of the twin centers of ISIS's so-called "caliphate," along with Mosul in neighboring Iraq — where US-backed forces are also bearing down on the jihadis.

After months sealing off access routes to the city from the east, north and west, the US-backed Syrian Democratic Forces on Tuesday entered the city limits for the first time.

"Our forces entered the city of Raqqa from the eastern district of Al-Meshleb," SDF commander Rojda Felat told AFP, adding that clashes were also raging on the city's northern outskirts.

"They are fighting street battles inside Raqqa now, and we have experience in urban warfare," she said.

The Syrian Observatory for Human Rights said clashes in al-Meshleb had forced ISIS members to withdraw from more than half of the district.

The SDF was also trying to push into Raqqa's northwestern district of al-Andalus, the monitor said, as fighting continued to the north, east and west of the city.

The advance in al-Meshleb was backed by heavy airstrikes by the US-led coalition, the observatory said.

The coalition began its air campaign against ISIS in Iraq in August 2014, expanding its operations to Syria the following month.

Read more: Captured by the Islamic State, these two Sinjar teens went through hell. Then they ran.

The coalition appears keen to expel ISIS from its last major urban bastions before the "caliphate" turns three years old later this month.

Defeating ISIS in Raqqa would "deliver a decisive blow to the idea of ISIS as a physical caliphate," coalition commander Lt. Gen. Steve Townsend said.

Warning the fight would be "long and difficult," Townsend framed the offensive as part of a greater struggle against ISIS, which has claimed attacks in many countries including last month's deadly bombing in Manchester.

"We all saw the heinous attack in Manchester," Townsend said. "ISIS threatens all our nations, not just Iraq and Syria, but in our homelands as well."

The SDF launched its operation to take Raqqa — dubbed "Wrath of the Euphrates" — in November.

It then scored a series of victories in the wider province, including capturing the strategic town of Tabqa and its adjacent dam in May.

On Tuesday, SDF spokesman Talal Sello made the long-awaited announcement that the battle for Raqqa itself had begun.

"We declare today the start of the great battle to liberate the city of Raqqa, the so-called capital of terrorism and terrorists," Sello told reporters in the village of Hazima, north of the city.

"With the international coalition's warplanes and the state-of-the-art weapons they provided to us, we will seize Raqqa from Daesh," Sello told AFP, using an Arabic acronym for ISIS.

Sello urged civilians inside the city to keep away from IS positions and from the front lines.

The United Nations said it was concerned for the safety of more than 400,000 men, women and children in Raqqa province who may be caught up in the violence.

As the SDF has drawn closer to the city, reports of civilian casualties in coalition airstrikes have swelled.

On Monday, the observatory said a coalition bombing raid killed 21 civilians as they tried to escape Raqqa by dinghy on the Euphrates River.

The same route leading out of the city's southern districts has been used by ISIS fighters, the monitoring group said.

An estimated 300,000 civilians were believed to have been living under ISIS rule in Raqqa, including 80,000 displaced from other parts of Syria.

Thousands have fled in recent months to other parts of the province or to makeshift camps in territory newly captured by the SDF.

On Tuesday, the International Rescue Committee said it was "deeply concerned for the safety of civilians in Raqqa" after a drop in numbers fleeing the city in the past week.

This "may indicate ISIS intends to use the 200,000 people still trapped in the city as human shields," the aid group said.

It also urged the "utmost care" to prevent civilian casualties after "a worrying number of civilians killed from coalition airstrikes across Raqqa in recent months."

There are also risks for civilians who try to escape the last cities under jihadi rule.

More than 320,000 people have been killed since civil war erupted in Syria in 2011 with anti-government protests.