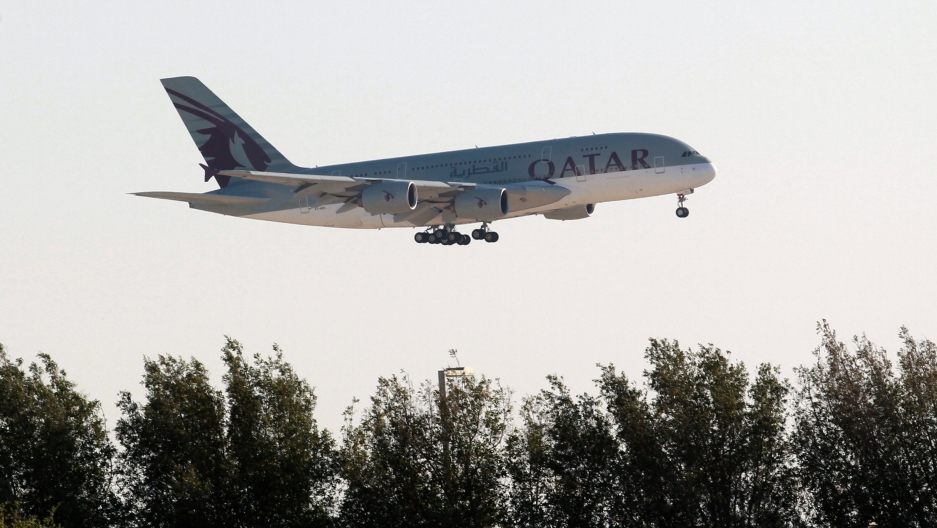 US President Donald Trump threw his weight behind efforts to isolate Qatar on Tuesday, backing Saudi Arabia and its allies after they cut ties with Doha over claims it supports extremism.

In a surprise move against a key US ally, Trump suggested Qatar — home to the largest American airbase in the Middle East — was funding extremism as he tacitly backed the diplomatic blockade of the emirate.

"So good to see the Saudi Arabia visit with the King and 50 countries already paying off," Trump said in a morning tweet, in reference to his trip to Riyadh last month.

"They said they would take a hard line on funding ... extremism, and all reference was pointing to Qatar. Perhaps this will be the beginning of the end to the horror of terrorism!"

Trump's broadside came as Kuwait's ruler flew to Saudi Arabia in a bid to resolve the worst diplomatic crisis to hit the Arab world in years.

Saudi Arabia and allies including Egypt, the United Arab Emirates and Bahrain announced Monday they were severing diplomatic relations and closing air, sea and land links with Qatar.

They accused the tiny Gulf state of harbouring extremist groups and suggested Qatari support for the agenda of Saudi Arabia's regional arch-rival Iran.

Energy-rich Qatar has long had strained ties with its neighbours but the move by Riyadh and its supporters shocked observers, raising fears the crisis could destabilize an already volatile region.

The dispute comes less than a month after Trump visited Saudi Arabia and called for Muslim nations to unite against extremism.

The rift was already having tangible effects, with dozens of flights cancelled, Qatari planes barred from regional airspace, and panic buying in Doha amid fears of food shortages.

Kuwait did not join fellow Gulf countries in taking measures against Doha, and its Emir Sheikh Sabah al-Ahmad Al-Sabah arrived in the Saudi city of Jeddah for talks to resolve the crisis.

In a call with Sheikh Sabah on Monday, Qatari leader Sheikh Tamim bin Hamad Al-Thani had agreed to put off a speech to the nation in order to give mediation a chance.

"We pray to God to help him succeed in achieving Gulf unity," veteran MP Ali al-Deqbasi said during a parliamentary session.

Qatari Foreign Minister Sheikh Mohammed bin Abdulrahman Al-Thani signaled that Qatar was open to talks, calling for "a dialogue of openness and honesty" to resolve the crisis.

"We believe any issue could be solved through discussion and mutual respect," he told Doha-based news channel Al-Jazeera.

UAE state minister for foreign affairs Anwar Gargash said Tuesday on Twitter that a "guaranteed roadmap" was needed before it would consider mending ties.

As well as cutting diplomatic relations and ordering Qatari citizens to leave their countries within 14 days, the Gulf states and Egypt banned all flights to and from Qatar.

UAE carriers Emirates, Etihad, flydubai and Air Arabia, as well as Saudi Airlines had all announced the suspension of flights to and from Qatar as of Tuesday morning.

Qatar Airways, for its part, said it had suspended all flights to Saudi Arabia, the UAE, Bahrain and Egypt "until further notice."

Countries including Saudi Arabia also banned Qatari planes from their airspace and Riyadh on Tuesday revoked Qatar Airways' operating licence in the kingdom.

"This is the emptiest airport I have been in so far," said Katie, transiting in Qatar en route to Thailand. "It's exceptionally quiet, almost eerie."

The crisis will have wide-ranging consequences, not just for Qatar and its citizens but across the Middle East and for Western interests.

Qatar is home to the biggest US airbase in the Middle East, Al-Udeid, where some 10,000 military personnel are stationed. As the forward headquarters of US Central Command, it is seen as crucial in the US-led campaign against the Islamic State group.

A Pentagon spokesman said the crisis has had "no impact on our operations in Qatar or with regards to airspace permission around it".

The International Air Transport Association called on the countries that acted against Qatar to restore air links with the country, warning of major travel disruptions.

"Of course we accept that countries have the right to close their borders," said IATA director general Alexandre de Juniac. "But connectivity with Qatar must be restored as quickly as possible."

Qatar is also a major regional diplomatic player and international investor and is set to host the World Cup, football's biggest tournament, in 2022.

But Qatar has also long been accused by its Gulf neighbors and Egypt of supporting extremist groups.

In announcing it was cutting ties, Riyadh accused Doha of harboring "terrorist and sectarian groups that aim to destabilize the region including the Muslim Brotherhood, Daesh (IS) and al-Qaeda."

"The measures are unjustified and are based on false and baseless claims," Qatar said in response to Monday's announcement.

Gulf countries previously recalled their ambassadors from Qatar in 2014, ostensibly over its support for the Brotherhood, but Monday's moves go much further.

Saudi Arabia and its Gulf allies may have felt emboldened by Trump's visit, which saw the new president clearly align US interests with Riyadh and lash out at Iran.

Qatar has an independent streak that has often angered its neighbors.

The emirate has directly and indirectly supported Islamist groups across the Arab world, including the Muslim Brotherhood.

Qatar has also been criticised for supporting Islamist rebels in Syria, and in 2013, the Afghan Taliban opened a Doha office.

Fellow Gulf states are also reported to have been angered by a huge ransom paid by Doha earlier this year to secure the release of a hunting party, which included members of the Qatari royal family, kidnapped in southern Iraq.

The ransom, which Iraqi officials said was in the "hundreds of millions of dollars", was believed to have been paid to militias with close ties to Tehran.