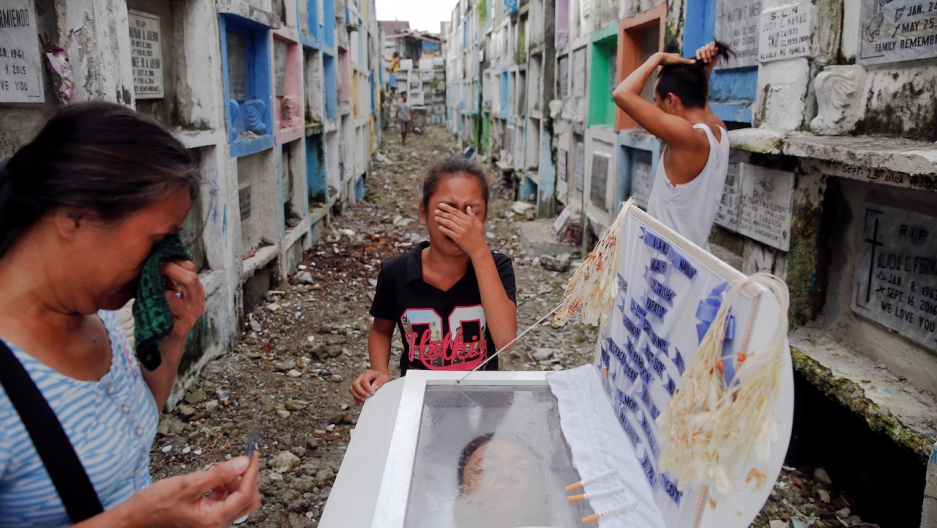 Kasandra Kate (C), 12, cries next to the coffin of her father Verigilio Mirano during his funeral at Navotas Public Cemetery in Manila, Philippines, Oct. 14, 2016. According to a family member, Mirano was using drugs but stopped after Rodrigo Duterte became the president; he was killed by masked gunmen at his home on Sept. 27.

Carl Hart is among the most ardent opponents of “drug myths” — stereotypes depicting meth and crack users as violent zombies.

His field, neuropsychopharmacology, sounds hopelessly niche. Yet his work generates notoriety. The Columbia University professor is widely recognized for research suggesting neither meth nor crack is as addictive as most governments claim.

In the past, Hart has explained his findings to Bill O’Reilly, Joe Rogan and Bill Maher. So he was hardly surprised when a group of health experts in the Philippines discovered his work online and invited him to speak in Manila.

After all, the Philippines is reeling from the world’s goriest ongoing drug war: a police campaign against meth users and dealers, launched by President Rodrigo Duterte, that has left more than 7,000 dead.

In early May, Hart landed in Manila ready to counter the “tremendous amount of misinformation about methamphetamine” in the Philippines.

“I thought it would be a nice thing to do,” he said. Hart had no idea that, shortly after his May 6 speech, he’d have to flee the country under a flurry of online death threats.

His fairly anodyne speech — which challenged Duterte’s claim that meth shrinks human brains — came to the attention of the president himself.

Duterte went off. He called Hart “that black guy … that son of a bitch who has gone crazy.” He accused him of peddling “bullshit.” Hart became an instant target to the president’s diehard supporters.

“I was receiving death threats,” Hart said. “In the Philippines, people will pay anywhere from $100 to $500 to kill people. I had to take it seriously … and I found a flight leaving the country immediately.”

Here’s the speech in full:

In an interview with PRI, Hart discussed Duterte’s “brain shrinkage” claim, the link between drug myths and brutal policies, and how the Philippine drug war recalls America’s own moral panic over crack and meth.

What follows are Hart's comments on several topics.

I’ve given out hundreds of doses of methamphetamine, approaching thousands. I’ve never seen anyone become violent.

Understand this: methamphetamine is essentially the same drug as amphetamine. We’ve tested both of these drugs in people and they produce the same effects.

Understand that amphetamines are prescribed all over the world. In the United States, they’re the number one drug for attention deficit disorder — prescribed to children as young as five years old.

They’re also prescribed to treat narcolepsy, obesity and depression. The military uses amphetamines to keep soldiers awake when they should probably be asleep.

Amphetamines are used widely but you don’t see all this violence that people are claiming. It’s just a myth.

Now if you’re not sleeping — and you don’t need amphetamines for this — you will run the risk of having problems. People get delusional. Paranoid. That’s certainly possible.

Hart's response to Filipinos who say he just doesn't it:

They’ll say I haven’t seen how bad it is in the Philippines. Like Filipino people are somehow different. That defies logic. Humans are humans.

So to simply blame the drug? Not only will you not get to the bottom of rape. But it’s just infant thinking. I don’t know what to say to people whose thinking is so remedial. You certainly don’t want them in charge of policies designed to protect society.

When you have a president making such ignorant comments about drugs — like he’s a pharmacologist — and when society allows that? And the scientific community doesn’t say it’s wrong? They have much bigger problems.

Duterte’s ignorance is only surpassed by those who support him on this issue.

But he is way out of his league when he talks about drugs. The people around him know better and should offer better advice. But it’s dangerous to go against the president. You could be put in jail or, even worse, you might be killed.

So the Filipino people are in a pickle.

On meth and brain shrinkage:

This is the most abhorrent claim made by the president. Millions of people around the world take this drug. For a variety of conditions. We don’t see anyone’s brain shrinking.

There’s almost no drug that shrinks your brain besides chronic alcohol use. We’re talking large, large doses. And it’s not really because of the alcohol. It’s because people stop eating and don’t get their vitamins and minerals — and then parts of their brain atrophy.

Comparing the Philippine drug crisis to past American drug scares:

When we [the US] went after crack cocaine, it indicated we had bigger problems. There were problems within the black population — and we tried to solve them by putting large numbers of black men in jail.

We pretended it was about crack cocaine. We now know it was never about crack. The same is true in the Philippines.

In the 1990s and early 2000s, we had similar concerns about methamphetamine in our own society. People were saying ridiculous things back then. Once you interrogate those claims, it’s clear that there were exaggerations.

History has showed us that the people they go after are always poor and marginalized. They problems they’ll blame on drugs were always there before the appearance of the drug. And will remain after the drug’s peak. History shows this with every drug crisis in the world.

The Philippines obviously has much bigger problems than methamphetamine. In terms of human rights. In terms of looking after every citizen.

So I want to make this clear. This ain’t a drug issue.

It’s about the elimination of poor people. It’s an excuse for why certain politicians are failing. The killings, for the most part, only happen in poor communities. This is not happening to the middle class.

All the physicians, the pharmacologists there, if they’re allowing this to happen? It shows they’re either ignorant or cowards.